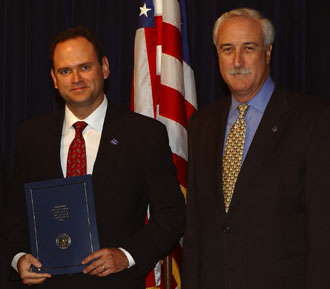 Receiving a Presidential Early Career Award for Scientists and Engineers (PECASE) for his research in Ocean Biology was not a position in which Dr. Carlos Del Castillo ever thought he would find himself.

During his first blue-water research cruise, he discovered, with horror, he was prone to severe seasickness. However, after reconsidering his career and undergoing a few very distressing days, he recovered and was able to work at sea.

Del Castillo, Program Scientist for the Ocean Biology and Biogeochemistry Program at NASA Headquarters, Washington. He still gets a bit squeamish in very rough weather, but has been able to outgrow his mal de mer.

Del Castillo's career started in 2000 at NASA's Stennis Space Center (SSC), Miss. Under the direction of Dr. Rick Miller, who led the Earth Systems Science Office, Del Castillo worked as a researcher. While at SSC, he began working in the Mississippi River plume and in the application of remote sensors to study coastal environments. His book, co-edited with Drs. Richard Miller and Brent McKee, "Remote Sensing of the Coastal Environment," will be published later this year.

In 2003 Del Castillo was offered a position as Program Scientist for the Ocean Biology and Biogeochemistry program at NASA Headquarters. This, one-year position, that has temporarily taken him away from his research, has offered him an opportunity to learn about policy, and interact with colleagues in academia and other branches of the government.

On September 9, Del Castillo received the PECASE award at a White House ceremony. These National Science and Technology Council (NSTC) awards represent the highest honor bestowed by the U.S. government on scientists and engineers beginning their independent careers. They recognize recipients' exceptional potential for leadership at the frontiers of scientific knowledge. The NSTC only bestows the PECASE award to an individual once during his or her career.

Receiving a presidential award was a long way from Del Castillo's humble beginnings. He was born in San Juan, Puerto Rico and spent most of his life on or near the ocean. "My first vehicle, unlike most kids, was not only a bike, but a small sailboat," said Del Castillo. "My love for the ocean has always played a great role in my life."

After completing a bachelor of science in Biology at the University of Puerto Rico, Mayaguez Campus, Del Castillo continued work on a master's degree in Marine Science. His master's thesis dealt with oil pollution. He presented the results of his thesis in a meeting in Rennes, France. After completing his degree and writing what he said, "at the time, and perhaps still is, the shortest thesis in the history of the university, only about 36 pages." Del Castillo continued work on a Ph.D.

As a graduate student he also was a "Weekend Warrior." He belonged to the 240th U.S. Army National Guard Military Police Company. He was deployed to Saudi Arabia during the first Persian Gulf War.

Due to lack of funding for oil pollution research in Puerto Rico and the desire to get a broader education, Del Castillo transferred to the University of South Florida (USF). While at USF, he submitted a proposal to NASA to study the optical properties of organic matter in the Orinoco River plume, a critical aspect in the use of optical sensors for ocean Biogeochemical research. Almost simultaneously, he was offered a position in a laboratory to conduct similar studies in the Arabian Sea. In 1999, for his work at USF, he was awarded the William Sackett Prize for Innovation and Excellence in Research.

"I think I've been very lucky in the course my studies have taken me. One thing led to another, and eventually I completed my doctoral studies after working in the Eastern Caribbean, the Arabian Sea, and the Gulf of Mexico, travel I never thought I would be doing," Del Castillo said.