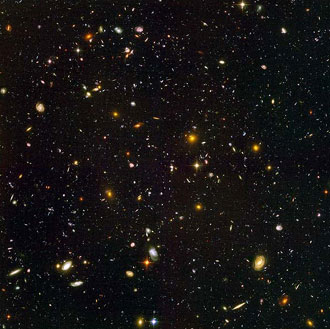 Image left: An estimated 10,000 galaxies are revealed in humankind's deepest portrait of the visible universe ever. Photo credit: NASA/ESA/S. Beckwith(STScI) and The HUDF Team.

Astronomers today unveiled the deepest portrait of the visible universe ever taken. A one-million-second long exposure taken by NASA's Hubble Space Telescope (HST) may reveal the first galaxies to emerge from the so-called "dark ages" shortly after the big bang.

The new image, called the Hubble Ultra Deep Field (HUDF), should offer new insights into what types of objects reheated the cold, dark universe about one billion years after the big bang, when stars first started to shine, about 13 billion years ago. The image reveals some galaxies at distances until now too faint to be seen even in Hubble's previous faraway looks, called the Hubble Deep Fields (HDFs), taken in 1995 and 1998.

"Hubble takes us to within a stone's throw of the big bang itself," said Massimo Stiavelli of the Space Telescope Science Institute (STScI) in Baltimore, and the HUDF project lead. A key question for HUDF astronomers is whether the universe appears the same at this very early time as it does when the cosmos was between one and two billion years old.

The HUDF field contains an estimated 10,000 galaxies. In ground-based images, the patch of sky in which the galaxies reside is largely empty, just one-tenth the diameter of the full moon. Located in the constellation Fornax, the region is below the constellation Orion.

This new view is actually two separate images taken by Hubble's Advanced Camera for Surveys (ACS) and the Near Infrared Camera and Multi-object Spectrometer (NICMOS). The combination of ACS and NICMOS images will be used to search for galaxies that existed between 800 and 400 million years after the big bang.

The ACS field is studded with a wide range of galaxies of various sizes, shapes, and colors. In vibrant contrast to the image's rich harvest of classic spiral and elliptical galaxies, there is a zoo of oddball galaxies littering the field. Some look like toothpicks, others like links on a bracelet. A few galaxies appear to be interacting. These oddball galaxies, that existed 800 million years after the big bang, chronicle a period when the universe was chaotic, when order and structure were just beginning to emerge.

The NICMOS reveals the farthest galaxies ever seen, perhaps just some 400 million years after the birth of the cosmos. That's because the expanding universe has stretched their light into the near-infrared portion of the spectrum, where NICMOS observes.

"The images will also help us prepare for the next step from NICMOS on Hubble to the forthcoming James Webb Space Telescope. The NICMOS images reach back to the distance and time that Webb is destined to explore at much greater sensitivity," explained Rodger Thompson of the University of Arizona and the NICMOS principal investigator.

The entire HUDF was observed with the advanced camera's "grism" spectrograph, an instrument used to measure distances to these distant objects. "The grism spectra have already yielded the identification of about a thousand objects. Included among them are some of the intensely faint and red points of light in the ACS image, prime candidates for distant galaxies," said Sangeeta Malhotra of the STScI and Principal Investigator for the Ultra Deep Field's ACS grism follow-up study. "Based on those identifications, some of these objects are among the farthest and youngest galaxies ever seen. The grism spectra also distinguish among other types of very red objects, such as old and dusty red galaxies, quasars and cool dwarf stars," he said.

The ACS picture required a series of exposures taken over the course of 400 HST orbits around Earth from Sept. 24, 2003, to Jan. 16, 2004. The size of a phone booth, ACS captured ancient photons of light that began traversing the universe even before Earth existed. Photons of light from the very faintest objects arrived at a trickle of one photon per minute, as opposed to millions of photons per minute from nearer galaxies.

The STScI is operated by the Association of Universities for Research in Astronomy, Inc. under contract with NASA's Goddard Space Flight Center, Greenbelt, Md. The HST is a project of international cooperation between NASA and the European Space Agency.

For more on this story, see the Web feature or image feature.

For information about NASA and agency projects on the Internet, visit:


For HST images and information on the Internet, visit: