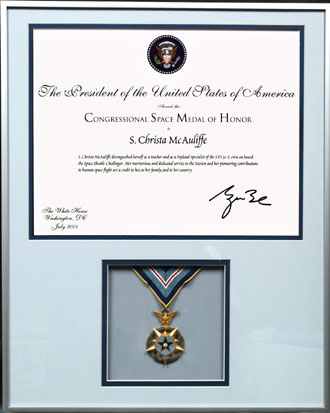 The families of the Space Shuttle Challenger's crew today accepted the Congressional Space Medal of Honor from NASA Administrator Sean O'Keefe. The honors, presented in the name of Congress and on behalf of President George W. Bush, were made during a private ceremony with the families of the seven astronauts in Washington.

"The Challenger tragedy was a defining moment in American history and demonstrated that achieving great things often comes with great sacrifice. We honor the bravery and dedication of the crew and their families with a renewed commitment to the causes to which they devoted their lives -- exploration and discovery," said Administrator O'Keefe. "Not a single day goes by that the entire NASA family doesn't think about the incredible spirit of these brave explorers. We will never forget our fallen astronaut heroes and their courageous families."

The Space Shuttle Challenger's crew of seven astronauts died in the explosion of their spacecraft during the launch of STS-51-L on January 28, 1986, from NASA's Kennedy Space Center in Florida. The explosion occurred 73 seconds into the flight, as a result of a leak in one of two Solid Rocket Boosters that ignited the main liquid fuel tank.

The Congressional Space Medal of Honor was authorized by Congress in 1969 to recognize "any astronaut who in the performance of his duties has distinguished himself by exceptionally meritorious efforts and contributions to the welfare of the Nation and mankind."

Astronauts who have been honored with the Congressional Space Medal include John Young, Jim Lovell, Virgil "Gus" Grissom, Shannon Lucid, William Shepherd and Senator John Glenn. In all, a total of 27 astronauts have now been honored.

For more information about NASA, mission STS-51-L of the Space Shuttle Challenger, and for a photograph of a Congressional Space Medal of Honor, visit the Internet at: