The awards will be presented during a special ceremony Tuesday night in Washington.

On this date in 1969 at 9:32 a.m. EDT, a Saturn V rocket lifted off from launch complex 39A at NASA's Kennedy Space Center in Florida. About 12 minutes later, the Apollo 11 crew was in orbit and ready for their journey into the history books. On July 20, with Command Module pilot Michael Collins in lunar orbit, astronauts Neil Armstrong and Buzz Aldrin left the Lunar Module and set foot on the surface of the Moon -- an accomplishment that today symbolizes American ingenuity, adventure and spirit.

The award celebrates the realization of a vision for exploration first articulated by President John F. Kennedy in May 1961, when NASA's fledgling human space flight program had little more than 15 minutes of experience.

"Shortly after Alan Shepard's historic flight in Freedom 7, the President set a goal that captured the imagination of the American people. The challenge of safely landing a man on the Moon sparked unprecedented technological and scientific achievements throughout the Mercury, Gemini and Apollo programs," said Administrator O'Keefe. "As we work to meet the goals set in our new Vision for Space Exploration, the determination of these brave explorers renews our commitment to expand human knowledge, revolutionize our understanding of the Universe and advance science and technology for the benefit of everyone on Earth."

To recognize the sacrifices and dedication of the Mercury, Gemini and Apollo astronauts, each will be presented a lunar sample, part of the 842 pounds of Moon rocks and soil returned during the six lunar expeditions from 1969 to 1972. 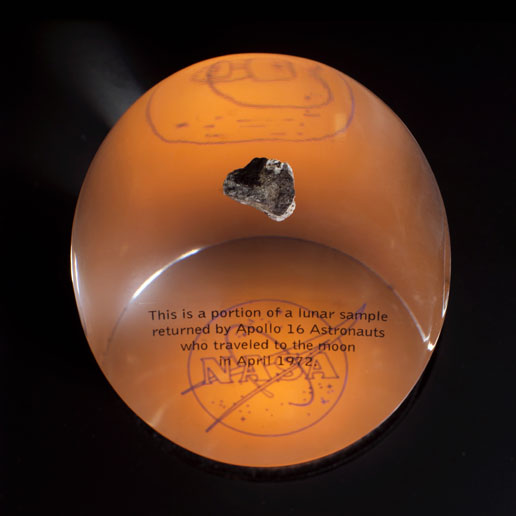 Image left: The Ambassador of Exploration Award recognizes the sacrifices and dedication of the Apollo, Gemini and Mercury astronauts. Each astronaut or their surviving families will be presented a lunar sample, part of the 842 pounds of moon rocks and soil returned during the six lunar expeditions from 1969 to 1972. Photo Credit: NASA
+ View Full Resolution Image (4.3 Mb) | + Read More

Also among the honorees is famed CBS journalist Walter Cronkite, the only non-astronaut selected as an Ambassador of Exploration. Millions of Americans experienced the drama and excitement of NASA's early years through the knowledgeable reports of Cronkite, who considered the space race as one of the most important events of the 20th century. During the Apollo 11 mission, Cronkite was on the air for 27 of the 30 hours it took for the Apollo 11 astronauts to complete their mission on the lunar surface.

The awards will remain the property of NASA, but Cronkite, the astronauts and their surviving families, in coordination with the agency, will select a museum or other educational institution where their awards will be publicly displayed in their name to help inspire a new generation of explorers.

"These awards are a fitting tribute and serve to remind each of us that great things can be achieved when we focus our energies and our resources on a specific goal," added the Administrator. "In January, President Bush charged us to carry humanity forward into the Universe, to gain a new foothold on the Moon, and to prepare for new journeys to worlds beyond our own. Each of us can be an Ambassador of Exploration and help secure America's preeminence in science and technology by supporting the Vision for Space Exploration."

As Ambassadors of Exploration, the recipients will help communicate the benefits and excitement of space exploration and why the continuing investment in our future is vital to the security and vitality of America.

The 35th anniversary event can be seen live on NASA Television and on NASA's Internet homepage at http://www.nasa.gov beginning at 7:30 p.m. EDT, July 20. For more information about the achievements of the Apollo program, Moon rocks and the Vision for Space Exploration, visit the Internet at: