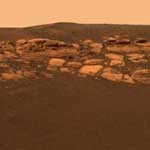 The most dramatic findings so far from NASA's twin Mars rovers -- telltale evidence for a wet and possibly habitable environment in the arid planet's past -- passed rigorous scientific scrutiny for publication in a major research journal.

Image left: This high-resolution image from March 2004 was captured by Opportunity's panoramic camera and highlights the puzzling rock outcropping near its landing site. Image credit: NASA/JPL/Cornell. Click for full image/caption.

"Liquid water was once intermittently present at the Martian surface at Meridiani, and at times it saturated the subsurface. Because liquid water is a key prerequisite for life, we infer conditions at Meridiani may have been habitable for some period of time in Martian history," according to Squyres, Arvidson and other co-authors.

"Formal review and publication this week of these amazing discoveries further strengthens the need for continued exploration by orbiters, surface robots, sample-return missions and human explorers. There are more exciting discoveries awaiting us on the red planet," said Dr. Michael Meyer, chief scientist for Mars exploration at NASA Headquarters, Washington.

Opportunity and Spirit have driven a combined 5.75 kilometers (3.57 miles), nearly five times their mission-success goal. They continue in good health after operating more than three times as long as the three-month prime missions for which they were designed.

NASA's rover team makes the resulting scientific discoveries available quickly to the public and the science community. One type of evidence that Meridiani was wet is the composition of rocks there.

The rocks have a high and variable ratio of bromine to chlorine; indicating "the past presence of large amounts of water," write Dr. Rudi Rieder and Dr. Ralf Gellert of Max-Planck-Institute for Chemistry, Mainz, Germany, and co-authors. Their paper and another by Dr. Phil Christensen of Arizona State University, Tempe, and collaborators report an abundance of sulfur-rich minerals in the rocks, another clue to a watery past. Clinching the case is identification of a hydrated iron-sulfate salt called jarosite in the rocks, as reported by Dr. Goestar Klingelhoefer of the University of Mainz, and Dr. Richard Morris of NASA's Johnson Space Center, Houston, and co-authors.

Structures within the rocks add more evidence according to Dr. Ken Herkenhoff of the U.S. Geological Survey, Flagstaff, Ariz., and co-authors. Plentiful cavities, about the size of shirt buttons, indicate crystals formed inside the rocks then dissolved. Minerals carried by water formed peppercorn-size gray spheres, nicknamed "blueberries," that are embedded in the rocks. Certain angled patterns of fine layers in some rocks tell experts a flowing body of surface water shaped the sediments that became the rocks.

Several characteristics of the rocks suggest water came and went repeatedly, as it does in some shallow lakes in desert environments on Earth. That fluctuation, plus the water's possible high acidity and saltiness, would have posed challenges to life, but not necessarily insurmountable ones, according to researchers. If life ever did exist at Meridiani, the type of rocks found there could be good preservers of fossils, according to Squyres, Dr. John Grotzinger of the Massachusetts Institute of Technology, Cambridge, and co-authors.

NASA's Jet Propulsion Laboratory, Pasadena, Calif., has managed the Mars Exploration Rover project since it began in 2000. Images and additional information about the rovers and their discoveries are available on the Internet at:

Information about NASA and agency programs is available on the Web at: