RELEASE : 04-126 NASA Engineer Hopes Mars Is In Her Future 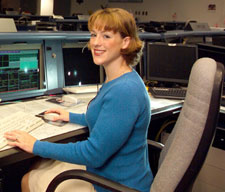 Jenny Gruber has wanted to be an astronaut since she was seven. That's when she saw "The Right Stuff," the 1983 movie that chronicled the early years of America's human space program. But she thought it unlikely that a child growing up amid meager surroundings in Omaha, Neb., could ever join the ranks of those who led the way into space.

"I grew up in a trailer park in Omaha. My dad is a bricklayer. My mother is a teacher. Statistically speaking, I should not be where I am today," Gruber said.

Gruber, 27, a Rhodes scholar and NASA aerospace engineer, is close to achieving her dream. She works in the Mission Control Center at NASA's Johnson Space Center (JSC) in Houston. She attributes her rise, from poor kid to aspiring astronaut, to hard work, a loving family who encouraged her and the inspiration of human space exploration.

Financial aid programs, scholarships, grants and her earnings as a NASA cooperative education student covered college expenses. In her junior year, she began a co-op assignment at JSC, alternating between semesters of full-time work and full-time study. The majority of her co-op assignment was spent in the Flight Design and Dynamics Division.

In 1999, Gruber attended Oxford University in England on a three-year Rhodes scholarship, one of the most prestigious academic fellowships in the world. Only 32 American scholars are annually chosen, based on academic achievement, strong personal characteristics and physical vigor, from more than 600 applicants.

At Oxford, Gruber researched ion propulsion and presented her findings in a thesis, "A Study of Erosion Due to Low-Energy Sputtering in the Discharge Chamber of the Kaufman Ion Thruster." She received a doctorate in engineering science in 2002 and returned to JSC as a full-time NASA employee.

Gruber works in JSC's Automated Vehicles and Orbit Analysis Group. She coordinates NASA mission operations for Japanese resupply missions to the International Space Station, scheduled to begin in 2008. She is also in training to monitor flight paths of non-Shuttle spacecraft docking with the Station. Gruber serves as liaison and coordinates operations between JSC and the U.S. Strategic Command at Offutt Air Force Base, Neb.

When not working or dreaming about traveling to Mars, Gruber enjoys reading and listening to music and keeps in top physical form by playing soccer, weight lifting, rock-climbing and running.

She brings that same level of energy and engagement to her dreams of spaceflight. Continuing humanity's legacy in space is "difficult and risky," she said. "That's what makes it so inspirational. There are challenges in human spaceflight, but they're worth it, and I feel like I'm contributing to something great," she added.

Gruber first applied for the astronaut corps in 2003, she was one of approximately 900 applicants. "I wasn't selected for an interview, but I think it's because I am young and lack experience compared to other applicants," Gruber said. "Most people have to apply four or five times before being selected, so I'm disappointed, but not discouraged. I'll keep trying," she added.