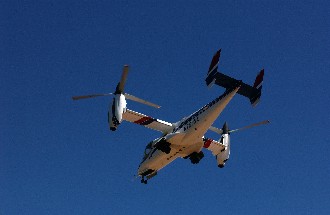 Image left: The XV-15 arrives at its new home with the National Air and Space Museum. Photo Credit: NASA/Renee Bouchard

The XV-15 tilt rotor aircraft today took its place in what could be called "aviation's hall of fame," when NASA and the U.S. Army transferred the vehicle to the National Air and Space Museum's new Steven F. Udvar-Hazy Center near Washington Dulles International Airport in Virginia.

"The XV-15 was one of NASA's most successful research aircraft and is a prime example of the cutting-edge aerospace research NASA is known for," said Dr. Victor Lebacqz, Acting Associate Administrator for NASA's Office of Aerospace Technology. "The transfer of the XV-15 to the National Air and Space Museum continues a NASA tradition of returning aerospace achievements to the American public," he said.

Tilt rotors are a unique type of aircraft that possess the take-off, hover and landing capabilities of a conventional helicopter with the range and speed of a turboprop aircraft. Tilt rotor flight research began in the 1950s with the Bell XV-3 convertiplane.

Using lessons learned from the XV-3, NASA's Ames Research Center, Moffett Field, Calif., in partnership with the U.S. Army, developed design specifications for a new aircraft to demonstrate the viability of the tilt rotor concept. After extensive ground, wind tunnel and simulator tests at Ames, the first of two XV-15s, built by Bell Helicopter Textron, took its maiden flight on May 3, 1977.

In the decades following the XV-15's maiden flight, a small but very dedicated group of engineers, designers and pilots from NASA, the U.S. Army and Bell Helicopter Textron accumulated many world records, industry accolades and NASA firsts. The XV-15 holds speed and altitude records for its class and awards from the American Helicopter Society and the American Institute of Aeronautics and Astronautics. In 1981, at the Paris International Air Show, the XV-15 became the first NASA experimental aircraft to perform demonstrations to an international audience.

The success of the XV-15 has led to the development of the V-22 Osprey and the world's first civil tilt rotor, the nine-passenger Bell Agusta 609, now under development and scheduled for deliveries in 2007.

The aviation hangar at the National Air and Space Museum's Steven F. Udvar-Hazy Center will be home to the museum's extensive vertical flight collection, which includes the first helicopter to carry a president of the United States (Dwight D. Eisenhower), the first helicopter powered by a turbine engine and the oldest surviving helicopter.

The center at Washington Dulles International Airport in Northern Virginia will eventually display 80 percent of the national air-and-space collection not currently housed at the building on the Mall or on loan to other museums and institutions. The center opens to the public Dec. 15.


For more information about the Steven F. Udvar-Hazy Center, visit: