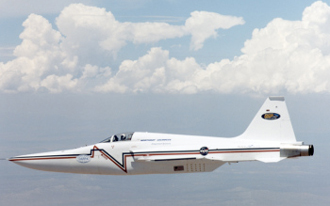 Flight tests completed by NASA, with government and industry partners, may have demonstrated a way to reduce the window-rattling impact of sonic booms.

In flights conducted Aug. 27 on the same test range where Chuck Yeager first broke the sound barrier nearly 56 years ago, the team showed modifying an aircraft's shape can also change the shape of its sonic boom, thereby reducing loudness. This theory had never been demonstrated in actual flight.

"This demonstration is the culmination of 40 years of work by visionary engineers," said Richard Wlezien, Program Manager for Vehicle Systems in NASA's Office of Aerospace Technology, Washington. "They foresaw a way to solve the sonic boom problem, and to enable a generation of supersonic aircraft that do not disturb people on the ground. It is but one of many frontiers in aeronautics that remain to be explored," he said. 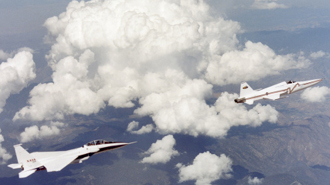 An aircraft traveling through the atmosphere continuously produces air-pressure waves similar to waves created by the bow of a ship. When the aircraft exceeds the speed of sound (approximately 750 mph at sea level), the pressure waves merge to form shock waves, which are heard as a sonic boom, when they reach the ground. The flight tests showed by designing the aircraft to a specific shape, the pressure waves can be kept from merging. When these weaker waves reach the ground, the loudness of the sonic boom is greatly reduced.

"The team was confident the SSBD design would work, but field measurements of sonic booms are notoriously difficult," said Peter Coen, Supersonic Vehicles Technology manager at LaRC. "We were all blown away by the clarity of what we measured."

For the demonstration, Northrop Grumman modified an F-5E fighter aircraft that was provided by the U.S. Navy's Naval Air Systems Command. The company designed and installed a specially shaped "nose glove" and added aluminum substructure and a composite skin to the underside of the fuselage.

During the experiment, the modified F-5E aircraft flew through a test range at Edwards Air Force Base, Calif., at supersonic speeds. NASA and industry sensors on the ground and in Dryden's F-15B measured the shape and magnitude of the sonic boom. Shortly thereafter, an unmodified F-5E flew through the same airspace. Comparison of the data confirmed the modified shape of the test aircraft altered the sonic boom as expected. Repeated tests verified these results.

For information about NASA, on the Internet, visit:

For pictures of aircraft used in the tests on the Internet visit: