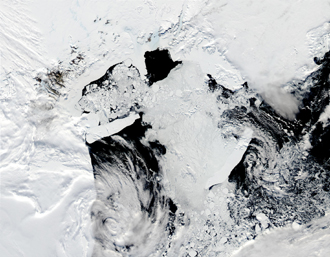 Image left: An iceberg twice the size of Rhode Island broke off the Ross Ice Shelf in Antarctica.

NASA satellites observed the calving, or breaking off, of one of the largest icebergs ever recorded, named "C-19."

C-19 separated from the western face of the Ross Ice Shelf in Antarctica in May 2002, splashed into the Ross Sea, and virtually eliminated a valuable food source for marine life. The event was unusual, because it was the second-largest iceberg to calve in the region in 26 months.

Over the last year, the path of C-19 inhibited the growth of minute, free-floating aquatic plants called phytoplankton during the iceberg's temporary stopover near Pennell Bank, Antarctica. C-19 is located along the Antarctic coast and has diminished little in size. Since phytoplankton is at the base of the food chain, C-19 affects the food source of higher-level marine plants and animals.

Kevin R. Arrigo and Gert L. van Dijken of Stanford University, Stanford, Calif., used chlorophyll data from NASA's Sea-viewing Wide Field-of-view Sensor (SeaWiFS). The instrument, on the OrbView-2 satellite, also known as SeaStar, was used to locate and quantify the effects of C-19 on phytoplankton. The researchers were able to pinpoint iceberg positions by using images from the Moderate Resolution Imaging Spectroradiometer (MODIS), an instrument aboard NASA's Terra and Aqua satellites. The findings from this NASA-funded study appeared in a recent issue of the American Geophysical Union's Geophysical Research Letters.

C-19 is about twice the size of Rhode Island. When it broke off the Ross Ice Shelf, the iceberg was 32 km (almost 20 miles) wide and 200 km (124 miles) long. It was not as large as the B-15 iceberg that broke off of the same ice shelf in 2001 but among the largest icebergs ever recorded.

Since it was so large, C-19 blocked sea ice from moving out of the southwestern Ross Sea region. The blockage resulted in unusually high sea-ice cover during the spring and summer. Consequently, light was blocked. Phytoplankton blooms that occur on the ocean surface were dramatically diminished, and primary production was reduced by over 90 percent, relative to normal years.

Primary production is the formation of new plant matter by microscopic plants through photosynthesis. Phytoplankton is at the base of the food chain. If they are not able to accomplish photosynthesis, all organisms above them in the food chain will be affected. "Calving events over the last two decades indicate reduced primary productivity may be a typical consequence of large icebergs that drift through the southwestern Ross Sea during spring and summer," Arrigo said.

Arrigo and van Dijken also used imagery from the Defense Meteorological Satellite Program (DMSP) satellite Special Sensor Microwave Imager and Scanning Multichannel Microwave Radiometer, managed by the U.S. Department of Defense. The data was used to monitor the impact of C-19 on the movement of sea ice. The data is archived at the National Snow and Ice Data Center, University of Colorado, Boulder.

Arrigo said most of the face of the Ross Ice Shelf has already calved. There is another large crack, but it is very difficult to predict if and when another large iceberg will result.

NASA's Earth Science Enterprise is dedicated to understanding the Earth as an integrated system and applying Earth System Science to improve prediction of climate, weather, and natural hazards using the unique vantage point of space.

For more information and images, on the Internet, visit:

For information about SeaWiFS on the Internet, visit:

For information about MODIS on the Internet, visit:

For information about DMSP, visit: