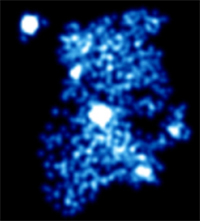 X-rays were detected from vast clouds of high-energy particles around the galaxies 3C294 and 4C41.17, which are 10 and 12 billion light-years from Earth, respectively. The energetic particles were left over from past explosive events that can be traced through the X-ray and radio jets back to the super massive black holes located in the centers of the galaxies.

"These galaxies are revealing an energetic phase in which a super massive black hole transfers considerable energy into the gas surrounding the galaxies," said Andrew Fabian of England's Cambridge University, lead author of a paper on 3C294 to appear in an upcoming issue of the Monthly Notices of the Royal Astronomical Society. "This appears to be crucial in explaining the puzzling properties of present-day galaxies, especially those that group together in large clusters," he said.

The picture that is emerging is of a grand cosmic cycle. A dense region of intergalactic gas cools to form several smaller galaxies, which merge to form a larger galaxy with a super massive black hole. The galaxy and its central black hole continue to grow until the energy generated by jets from the vicinity of the voracious black hole stops the fall of matter into the black hole. Millions of years after the jet activity subsides, matter will resume falling into the black hole and the cycle begins anew.

Both 3C294 and 4C41.17 reside in regions of space containing unusually high numbers of galaxies. The gas and galaxies surrounding these galaxies will eventually collapse to form galaxy clusters, some of the most massive objects in the universe. Although 3C294 and 4C41.17 will grow to gargantuan sizes, through the accumulation of surrounding matter that forms hundreds of billions of stars, their growth does not go unchecked.

"It's as if nature tries to impose a weight limit on the size of the most massive galaxies," said Caleb Scharf of Columbia University, New York, and lead author of a paper on 4C41.17 to be published in The Astrophysical Journal. "The Chandra observations have given us an important clue as to how this occurs. The high-energy jets give the super massive black holes an extended reach to regulate the growth of these galaxies," he said.

In 3C294 and 4C41.17, the hot swirling infernos around their super massive black holes have launched magnetized jets of high-energy particles first identified by radio telescopes. These jets, which were also detected by Chandra, have swept up clouds of dust and gas and have helped trigger the formation of billions of new stars. The dusty, star-forming clouds of 4C41.17, the most powerful source of infrared radiation ever observed, are embedded in even larger clouds of gas.

Astronomers recently used the Keck Observatory to observe these larger clouds, which have a temperature of 10,000 degrees. These clouds are leftover material from the galaxy's formation and should have cooled rapidly by radiation in the absence of a heat source.

"Significantly, the warm gas clouds coincide closely with the largest extent of the X-ray emission," said Michiel Reuland of Lawrence Livermore National Laboratory, Livermore, Calif., a coauthor on the 4C41.17 paper and a paper describing the Keck Observatory work. "The Chandra results show that high-energy particles or radiation can supply the necessary energy to light up these clouds," he said.

Most of the X-rays from 4C41.17 and 3C294 are due to collisions of energetic electrons with the cosmic background of photons produced in the hot early universe. Because these galaxies are far away, their observed radiation originated when the universe was younger and the background was more intense. This effect enhances the X-radiation and helps astronomers to study extremely distant galaxies.

Images and information are available at: