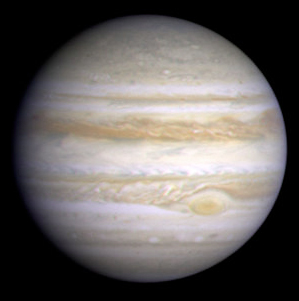 This image of Jupiter was taken by NASA's Cassini spacecraft. The Great Red Spot (below and to the right of center) is a giant atmospheric storm as wide as two Earths and over 300 years old, with peripheral winds of 483 kilometers per hour (300 miles per hour).
Pictures of Jupiter, taken by a NASA spacecraft on its way to Saturn, are flipping at least one long-standing notion about Jupiter upside down.

Stripes dominate Jupiter's appearance. Darker "belts" alternate with lighter "zones." Scientists have long considered the zones, with their pale clouds, to be areas of upwelling atmosphere, partly because many clouds on Earth form where air is rising. On the principle of what goes up must come down, the dark belts have been viewed as areas where air generally descends.

However, pictures from the Cassini spacecraft show that individual storm cells of upwelling bright-white clouds, too small to see from Earth, pop up almost without exception in the dark belts. Earlier spacecraft had hinted so, but not with the overwhelming evidence provided by the new images of 43 different storms.

"We have a clear picture emerging that the belts must be the areas of net-rising atmospheric motion on Jupiter, with the implication that the net motion in the zones has to be sinking," said Dr. Tony Del Genio, an atmospheric scientist at NASA's Goddard Institute for Space Studies, New York. "It's the opposite of expectations for the past 50 years," he said.

Del Genio is one of 24 co-authors from America and Europe reporting diverse results from the Cassini imaging of Jupiter in Friday's edition of the journal Science. Cassini's camera took about 26,000 images of Jupiter, its moons and its faint rings over a six-month period as the spacecraft passed nearby two years ago.

"The range of illumination angles at which Cassini viewed Jupiter's main ring gives insight about particles in the ring by the way they scatter sunlight. The particles appear to be irregularly shaped, not spheres," said camera-team leader Dr. Carolyn Porco of Southwest Research Institute, Boulder, Colo. "They likely come from surfaces of one or more moons being eroded by micrometeoroid impacts," she said.

Spherical particles would suggest an origin as melted droplets, not erosion. In addition, Cassini imaging shows the degree to which the orbits of two small moons near the ring, Metis and Adrastea, are inclined matches the vertical thickness of the ring. That points to those moons as sources of the ring particles said Porco.

One surprise in ultraviolet images of Jupiter's north polar region is a swirling dark oval of high-atmosphere haze the size of the planet's famous Great Red Spot. "It's a phenomenon we haven't seen before, so it gives us new information about how stratospheric circulation works," said Dr. Robert West of NASA's Jet Propulsion Laboratory (JPL), Pasadena, Calif. The results show the winds and the life cycle of clouds in the stratosphere.

Also, movies of infrared images reveal persistent bands of globe-circling winds extend north of the conspicuous dark and light stripes. "The planet's appearance at high latitudes is like leopard spots, but when you see it in motion, it's interesting that all the spots at one latitude move in one direction and all the spots at adjacent latitudes move the opposite direction," said Dr. Andrew Ingersoll of the California Institute of Technology (Caltech), Pasadena.

Other discoveries reported include atmospheric glows of the large moons Io and Europa during eclipses, a volcanic plume over Io's north polar region, and the irregular shape of a small outer moon, Himalia.

"The Jupiter results provide some hints of the spectacular new findings that await Cassini when it reaches Saturn," Dr. Larry Esposito of the University of Colorado, Boulder, principal investigator for Cassini's ultraviolet-imaging spectrograph instrument, predicts in a separate commentary in Science about the Cassini camera results at Jupiter. Cassini will begin orbiting Saturn July 1, 2004, and will release its piggybacked Huygens probe about six months later for descent through the atmosphere of the moon Titan.

Images and mission information are available on the Internet at:


For more information about NASA on the Internet: http://www.nasa.gov.