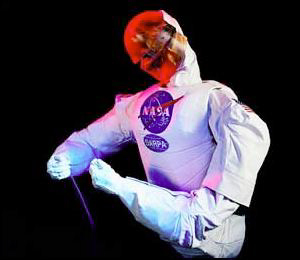 Image to left: Robonaut B is the newer of two NASA robots used in recent hand-in-hand testing at the Johnson Space Center with human beings to evaluate their shared ability to perform certain types of work outside the spacecraft.

Humans and robots worked side-by-side this summer at NASA's Johnson Space Center (JSC) in Houston to evaluate the concept of using human-robotic teams to improve the productivity of the astronauts working outside the International Space Station, other space vehicles, or on the surface of other planets.

"We like to think of these as 'EVA (extravehicular activity) squads' -- humans outside the spacecraft in space suits, dexterous robots, humans inside the spacecraft or on the ground tele-operating robots, free-flying robots, giant crane robots -- all working together to get the job done," said Test Conductor Dr. Robert Ambrose of the JSC Engineering Directorate's Automation, Robotics and Simulation Division.

"The EVA work done now uses two astronauts, backing each other up, with help from astronauts inside and a large robotic arm outside," said Ambrose, who also manages the Robonaut Project that supplied two dexterous humanoid robots for the test. "To get more work done during the six to eight hours the astronauts have in their suits, we want them each to be their own team leader. When they come out of the airlock they each form their own human-robot squads and work in parallel, getting twice as much done." The new Robonaut, a collaborative effort with the Defense Advanced Research Projects Agency, also known as DARPA, has been under development at JSC for the last several years.

Astronaut Nancy Currie stepped into an advanced concept space suit to participate in the test as the squad leader. The task at hand was to assemble an aluminum truss structure. Currie and her Robonaut companions assembled the truss several times, significantly cutting the time required to complete the task on each run.

After the structure was assembled, the team installed electrical cable, with the Robonauts taking the cable out of its package and routing it around the truss to Currie, who connected it to the truss using a standard EVA electrical connector and wire ties. To wrap up the test series, they simulated what would happen if a hazardous chemical contaminated Currie's space suit, with Currie using a special brush to remove the make-believe chemical and then handing the brush to a Robonaut to clean the places she couldn't.

Currie wore an advanced-concept space suit designed for use on other planets. The suit is half as heavy as a standard Shuttle Extravehicular Mobility Unit (EMU) and easier to maneuver in Earth’s gravity. The "I-suit," developed for NASA by ILC Dover, Inc., is one of several different advanced space suit assemblies being used to compare the relative merits and liabilities of various suit components.

"I think it went great," Currie said of the test series. "In the next five years, when we think about EVA, we’re going to think in terms of sending out squads. If you look at an EVA timeline, about 20 percent is worksite setup and closeout, getting tools ready and managing tethers." Robonauts could help reduce that time, making an astronaut more productive or cutting the amount of time the astronaut has to be outside in a hazardous environment. 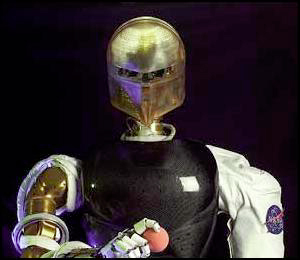 Image to right: A head and torso shot of a full-sized a humanoid robot, or Robonaut.

"On the Station, you could send a Robonaut or two out early to set up the worksite, or leave them out late to clean up. They could be stored in an outside garage and used as a quick response mechanism, or to respond to hazardous chemicals, such as the ammonia used in the Station's cooling system," Currie explained, noting that after a trip to Mars, the crew will need time to adjust to the partial gravity environment on the planet. "You could be productive from the first day by sending robots out as scouts while letting the crew adapt to the Mars environment."

The Robonauts, with their highly dexterous hand design, can work with the same tools humans use. For these tests, the Robonauts used standard EVA tools, such as ratchet wrenches, retractable tethers and socket caddies. In the future, a Robonaut could work like a nurse in an operating room, where an EVA crewmember, like a doctor, would ask the nurse for a particular tool and have it placed in his or her hand.

Robonauts of the future could be used for a variety of jobs, including assembly of orbital telescopes, remote Earth observatories and interplanetary transit vehicles, all of which could require work beyond low-Earth orbit.

"We're looking at what new machines we need to build and how we need to team them up to help the astronauts get more work done," Ambrose said. "The technology could be ready for International Space Station jobs in the next three to four years."

For more robot images, visit the image gallery at:

Learn more about NASA on the Internet at: