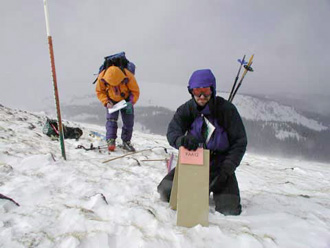 Scientists and students from six federal agencies and many universities will study the snow packs of the Colorado Rockies from the ground, air and space this year. Their goal is to improve forecasts of springtime water supply, snowmelt floods, and to study how snow-cover affects the Earth's weather and climate.

The 2003 Cold Land Processes Experiment (CLPX) runs February 19-25 and March 25-31. It will be conducted in the central Rocky Mountains of the western United States, where there is a wide array of different terrain, snow, soil, and ecological characteristics.

Additional studies will help design better sensors to measure the water content of snow from space. In the future, new remote sensing measurements coupled with water and weather forecast models should improve prediction of water supplies, floods, weather and climate.

Jointly sponsored by NASA and NOAA, CLPX is concerned with landscapes where water is frozen either seasonally or permanently. Cold regions form a major component of the Earth's hydrological system. This is the second year of intensive snow measurements in Colorado's mountains and high-elevation rangelands. A major advance this year is the inclusion of several advanced satellite and airborne sensors to determine the best ways to conduct remote sensing of the global cryosphere.
Measurements from four aircraft and NASA's Terra and Aqua satellites will gather snow data by remote sensing. The data gathered on the ground and from the aircraft will be compared to that obtained by the satellites to determine the accuracy of the satellite data. Researchers hope to eventually measure snow quantity and frozen ground from space, anywhere in the world without a ground team, particularly in inaccessible areas. Ground teams, however, do play a crucial part in instrument validation and calibration.

CLPX is sponsored by NASA's Terrestrial Hydrology Program and the Earth Observing System Program, and by NOAA's Office of Global Programs to address broad interagency objectives in hydrology, water resources, ecology, and atmospheric sciences. NOAA is dedicated to enhancing economic security and national safety through the prediction and research of weather and climate-related events and providing environmental stewardship of our nation's coastal and marine resources. NASA's Earth Science Enterprise is dedicated to understanding the Earth as an integrated system and applying Earth System Science to improve prediction of climate, weather, and natural hazards using the unique vantage point of space.