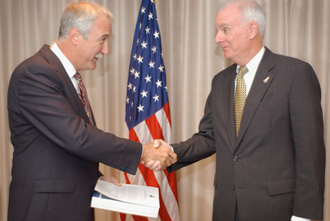 This morning, NASA Administrator Sean O'Keefe received the report of the Columbia Accident Investigation Board (CAIB) from the chairman, retired U.S. Navy Admiral Harold Gehman. The following is a statement from the NASA Administrator regarding the CAIB report.

"On the day of the Columbia tragedy, NASA committed to the families of STS-107's crew that we would find the problems that caused this horrible accident, fix them, and return to the exploration objectives their loved ones dedicated their lives to. Today, we have completed the first phase of that important commitment.

"This morning, Admiral Hal Gehman presented the findings and recommendations of the Columbia Accident Investigation Board. The members have established what they believe to be the factors that contributed to the tragic loss of Columbia and her courageous crew.

"I want to express NASA's appreciation for the Board's report, which is timely, thorough, and direct. The efforts of all concerned with the investigation will help NASA improve the Space Shuttle program, our management processes, and our capability to safely return to flight.

"The findings and recommendations of the Columbia Accident Investigation Board will serve as NASA's blueprint. We have accepted the findings and will comply with the recommendations to the best of our ability. The Board has provided NASA with an important road map, as we determine when we will be 'Fit to Fly' again.

"Due to the comprehensive, timely and open public communication displayed by the Board throughout the investigative process, we already have begun to take action on the earlier issued recommendations, and we intend to comply with the full range of recommendations released today.

"As an important step to change the culture of the agency, we have created the NASA Engineering Safety Center (NESC) at the agency's Langley Research Center in Hampton, Va., to provide comprehensive examination of all NASA programs and projects. The NESC will provide a central location to coordinate and conduct robust engineering and safety assessment across the entire agency. The NESC will play a key role in ensuring we return to flight safely and sustain a high level of engineering and safety excellence for every NASA program.

"The independent Columbia Accident Investigation Board performed an important service for the Nation, for NASA, and for the dedicated families of Columbia's crew. The Board members conducted a thorough and comprehensive review of the mission and the entire Space Shuttle program. The Board's efforts to perform a timely and a complete investigation into the technological, engineering, managerial, and human aspects that contributed to the accident are nothing short of heroic in nature. We are grateful for their dedication."

For information about NASA's return to flight efforts on the Internet, visit:

To review the Columbia Accident Investigation Board recommendations on the Internet, visit: