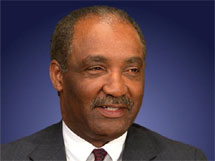 "Don's leadership and his devotion to the success of the Glenn Research Center has made it a premiere advanced technology laboratory," Gregory said. "He's a remarkable public servant whose ongoing counsel on innovative technology will play an important role in NASA's continued advancement of next generation power systems that will help extend the agency's mission of discovery into the unexplored regions of the Universe."

In his position as Special Assistant to the Deputy Administrator, Campbell will provide the leadership required to focus and integrate NASA's in-space alternative power generation development activities. Campbell's efforts, which will be based at GRC, represent a revolutionary approach for next-generation power and propulsion systems. High capacity power generation is a fundamental building block for sustained robotic and human exploration beyond low Earth orbit.

Campbell began his government career in 1960 as a test engineer for gas turbine engines and engine components at the U.S. Air Force Aero Propulsion Laboratory, Wright-Patterson Air Force Base, Ohio.

In 1986, Campbell was assigned as an interim Directorate Chief during the implementation of the National Aerospace Plane (NASP) Program Office at Wright-Patterson, and in 1987 he became Acting Deputy director of the Aero Propulsion Laboratory. In 1988, he was selected for the rank of Senior Executive Service and was appointed Deputy Program Director for the Propulsion System Program Office, Aeronautical Systems Division.

In 1990, he was appointed Director of the U.S. Air Force Aero Propulsion and Power Laboratory. He was responsible for development in the areas of gas turbine engines, ramjet engines, aerospace power systems, fuels and lubricants. He was named Director of Science and Technology in 1992 for the Office of the Assistant Secretary of the Air Force for Acquisition in Washington.

He completed the Senior Executive Seminar in Management at Carnegie Mellon School of Urban and Public Affairs and the Executive Leadership Program at the Federal Executive Institute. He has studied at the Brookings Institute and Defense Systems Management School.

Campbell has been honored with the Air Force Systems Command Certificate of Merit, the Meritorious Civilian Service Award, and the Presidential Rank Award of Meritorious Executive in the Senior Executive Service. He also received the Affirmative Action Award from the Ohio Dr. Martin Luther King, Jr. Holiday Commission and was named the 1998 Federal Laboratory Director of the Year for Technology Transfer by the Federal Laboratory Consortium. He was recently recognized with the Technical Excellence in Government and Engineer of the Year Award from the National Technical Association. Campbell was presented the Career Achievement Award by the 2001 Black Engineer of the Year Awards.

"Don has been an innovator his entire career and he's been a tireless advocate for both Glenn and his hometown," added Gregory. "I know the entire NASA family looks forward to Don's continuing contributions in this important position critical to opening the frontiers of deep space and fulfilling NASA's vision."

GRC has more than 500 specialized research facilities located at the 350-acre site near Cleveland's Hopkins International Airport, and the 6400-acre Plum Brook Station in Sandusky, Ohio. Information about NASA and GRC is available on the Internet at: