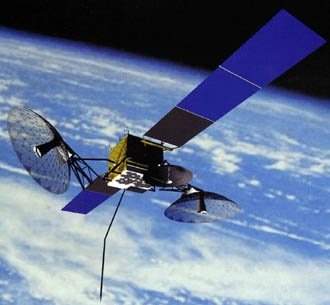 NASA's original Tracking and Data Relay Satellite (TDRS-1), launched from the Space Shuttle Challenger (STS-6) in April 1983, went from almost being "lost in space," to a remarkable example of the agency's 'can do, never quit' attitude. On April 4, TDRS-1 celebrates 20 years of outstanding service and 'firsts.'

After deployment, the spacecraft's upper stage failed. NASA engineers at the Goddard Space Flight Center (GSFC) came to TDRS-1's rescue using the spacecraft's tiny, one-pound thrusters. They used the thrusters, over several months, to nudge the satellite into a geosynchronous Earth orbit. Because TDRS-1 has been inclining in its orbit almost one degree per year since its deployment, this satellite has been used in ways never expected.

TDRS-1 began life by opening a new era in NASA satellite communications. It tracked low Earth-orbiting satellites, enabling NASA to issues commands and receive telemetry through most of their orbit. Working solo, TDRS-1 provided more communication coverage, in support of the September 1983 Shuttle mission, than the entire network of NASA tracking stations had provided in all previous Shuttle missions.

The second TDRS satellite was destroyed in the Challenger accident in January 1986, so TDRS-1 was left alone in orbit for several years to carry the load. In March 1992, NASA called on TDRS-1 to quickly aid the agency's Compton Gamma Ray Observatory (CGRO), when data recorders onboard the spacecraft failed.

Engineers constructed a ground station in Canberra, Australia to close the zone of communications exclusion and minimize science data loss. Controllers re-positioned TDRS-1 in view of the new station. TDRS-1 was able to supplement the communications services provided by the other on-orbit TDRS satellites, providing the CGRO with downlink capability over previously inaccessible portions of its orbit. Since 1992, NASA has used TDRS-1 for communications to very high latitude ground sites.

Other TDRS-1 firsts include: