Editor's Note: This is the 29th in a series of essays on exploration by NASA's Chief Historian, Steven J. Dick.

It may well be argued that NASA has become the world's premier agent for exploration, carrying on in "the new ocean" of outer space a long tradition of expanding the physical and mental boundaries of humanity. Fifty years ago, however the agency that pushed the frontiers of aeronautics, took us to the moon, flew the space shuttle, built the International Space Station and revealed the secrets of the cosmos, was in its birth throes, and fundamental decisions were being made that profoundly shaped all that was to come. 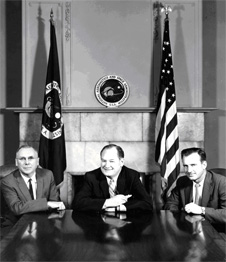 The driving force, of course, was the launch of Sputnik on Oct. 4, 1957, followed by its even weightier successors. In the midst of the Cold War, a country that aspired to global preeminence could not let that challenge pass. Although the United States already had its own satellite plans in place as part of the International Geophysical Year, the Russian events spurred the Space Age, and in particular gave urgency to the founding of an American national space agency.

In the wake of the Sputniks, events moved quickly toward the development of NASA, especially considering the weighty issues that had to be resolved. Should there be a new agency, or one built on an already established institution, such as the National Science Foundation (NSF), the Atomic Energy Commission (AEC), or the National Advisory Committee for Aeronautics (NACA)? Or should it be part of a military agency – the Army and Air Force were both keen, based on their missile work. If it was military or civilian agency, then how to divide the tasks peculiar to each function? Should the new agency include aeronautical activities? Should it have the power to implement international agreements, how should those agreements be used as an instrument of foreign policy, and what should the new agency’s relationship be with the State Department?

Already on Nov. 25, 1957 Senator Lyndon B. Johnson began hearings on American space and missile activities in the Preparedness Investigating Subcommittee of the Senate Armed Services Committee. This led on Feb. 6, 1958 to the establishment of a Senate Special Committee on Space and Aeronautics, with the goal of establishing a space agency, and Senator Johnson as its chairman. On the House side of Congress the Select Committee on Astronautics and Space Exploration was created on March 5, chaired by House majority leader John W. McCormack.

Meanwhile, in the Executive Branch President Eisenhower had asked his science advisor, James R. Killian, Jr., to convene the Presidential Science Advisory Committee (PSAC) for deliberations on the subject. By March 5 Eisenhower had approved a memorandum, dated the same day and signed by Nelson Rockefeller, chairman of the President’s Advisory Committee on Government Organization, on which Killian also served. It proposed a civilian space agency built around the NACA, which by this time spent about half its total effort on space-related projects, including the Vanguard, X-15, and Defense Department missile programs. In the following weeks legislation was drafted by the Bureau of the Budget, NACA and Killian’s office. One of those Bureau of Budget drafters, Willis H. Shapley (son of the famous Harvard astronomer Harlow Shapley), later became a Deputy Associate Administrator of NASA. Another drafter, Paul G. Dembling – general counsel for the NACA during the crucial 1957-58 period and later the NASA general counsel – recalled that it was a high pressure situation “because other agencies [than NACA] were seeking the mantle, and we didn’t know exactly where we all stood.” Dembling, who is still alive and well today, recalls there was no one source for drafting such legislation, and he relied on past decisions by the General Accounting Office. The legislation that emerged called for a new agency rather than a strengthened NACA, responding to the criticism of some that NACA had become too lethargic to deal with the onrush of events, and that a new start was needed.

On April 2, Eisenhower sent the draft legislation to Congress establishing the "National Aeronautics and Space Agency." At the behest of Eilene Galloway, who worked for the Congressional Research Service and served as a consultant to both Senator Johnson and Congressman McCormack during the drafting of the final Space Act, the name was changed to "National Aeronautics and Space Administration." It was her belief that an "Administration" with an "Administrator" would be vested with more power than a mere "agency" with a "director," and in fact that the new institution would need that power to coordinate with many other agencies. Galloway, too, is alive and well today, still offering her reminiscences at age 101.

After Congressional hearings during spring 1958, Congress passed the legislation and President Eisenhower signed the National Aeronautics and Space Act into law on July 29, 1958. Although it had generally been assumed that Hugh Dryden, the head of the NACA, would be appointed administrator, three weeks later, on Aug. 19, T. Keith Glennan – the President of Case Institute of Technology since 1947 and a former member of the Atomic Energy Commission – was sworn in at the White House as NASA's first Administrator, with Dryden as his Deputy Administrator. NASA formally opened for business on Oct. 1, 1958.

It is instructive to recall the objectives for NASA that emerged in section 102 of the final Space Act: The Space Act has been amended many times since 1958 (see online reference below for details), but these goals have been little changed. In NASA’s Authorization Act for 1985 the expansion of human knowledge “of the Earth” was added to goal 1, reflecting increased concern about Earth resources and global climate change. And in the Authorization Act for 1989 a ninth goal was added: “The preservation of the United States preeminent position in aeronautics and space through research and technology development related to associated manufacturing processes.” Other sections of the Space Act dealt with the civilian-military coordination, international cooperation, the demise of the NACA, the transfer of functions from other government agencies, and intellectual property rights.

Beyond the logistical questions in the founding of a new space agency were larger issues not fully grasped at the time. In creating NASA, Pulitzer-Prize historian Walter McDougall argued, Congress was creating a technocratic institution, where technocracy is defined as “the institutionalization of technological change for state purposes, that is, the state-funded and-managed R&D explosion of our time.” He saw Sputnik as a saltation that sparked this technological revolution. McDougall later revised this point in light of the events of the Space Age. Historian Robert MacGregor has also recently challenged the view of Sputnik as a technological saltation, arguing that technocratic ideas of the relation of science to the state were already well established by this time. In particular he points to the parallels between the Atomic Energy Commission and NASA, and further argued that “NASA's rise in the 1960's as an engine of American international prestige was rooted in atomic diplomacy, and that certain debates in Congress about the new agency were largely approached from within a framework of atomic energy, thereby limiting the range of discourse and influencing the shape of the new agency.” MacGregor finds of special importance the sections of the National Aeronautics and Space Act that were inspired by the Atomic Energy Acts of 1946 and 1954, especially the relation of the Department of Defense to the new agency, the role of international cooperation, and the apportionment of intellectual property. Issues great and small were involved in the founding of NASA. It may truly be said that NASA has achieved the goals laid out in section 102, sometimes in spectacular fashion, with the possible exception of objective 4, involving studies of the long-range benefits and problems related to spaceflight.

That objective is now being undertaken in the NASA History Division, as witnessed in the recent publication of Societal Impact of Spaceflight (see http://history.nasa.gov/sp4801-part1.pdf.) and other planned publications. Perhaps no goal is more important for sustaining a robust space program than ensuring that society has a vested interest in the aeronautics and space activities of NASA and the other space agencies that have sprouted up around the world over the last 50 years.

Galloway, Eilene, "Sputnik and the Creation of NASA: A Personal Perspective," in NASA: 50 Years of Exploration and Discovery (Faircount, 2008), pp. 48-49.

Griffith, Alison. The National Aeronautics and Space Act: A Study of the Development of Public Policy (Washington, D.C., 1962)

Logsdon, John M., moderator. Legislative Origins of the National Aeronautics and Space Act of 1958, Proceedings of an Oral History Workshop, conducted April 3, 1992. Monographs in Aerospace History # 8, (NASA History Office, 1998). Online at http://www.hq.nasa.gov/office/pao/History/40thann/legislat.pdf , or a larger file with graphics at http://www.hq.nasa.gov/office/pao/History/40thann/legorgns.pdf

MacDougall, Walter. ... The Heavens and the Earth: A Political History of the Space Age (Baltimore, MD: The Johns Hopkins University Press, 1985)

National Aeronautics and Space Act of 1958, as amended, with legislative history showing changes over time, online at http://history.nasa.gov/spaceact-legishistory.pdf