A Moment in Time: Explorer 1

Editor's Note: This is the 28th in a series of essays on exploration by NASA's Chief Historian, Steven J. Dick.

The year 2008 will be a year of 50th anniversaries for space exploration. Following in the wake of Sputnik I and Sputnik II, on January 31, 1958 the United States launched Explorer 1 on the Army's Jupiter-C (Juno) rocket. The Navy's Vanguard followed on March 17. On July 29 President Eisenhower signed legislation creating NASA, which became operational on October 1, 2008. During this anniversary year, I will write on each of these events, beginning with Explorer 1. 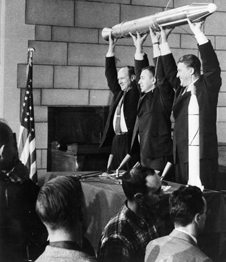 The three men responsible for the success of Explorer 1, America's first Earth satellite, launched January 31, 1958. At left is Dr. William H. Pickering, director of JPL, which built and operated the satellite. Dr. James A. van Allen, center, of the State University of Iowa, designed and built the instrument on Explorer that discovered the radiation belts which circle the Earth. At right is Dr. Wernher von Braun, leader of the Army's Redstone Arsenal team, which built the first stage Redstone rocket that launched Explorer 1.

One way to approach Explorer 1 is through one of the most iconic images of the Space Age. That image is not the launch itself from Cape Canaveral, spectacular as it was as a nighttime event (10:48 pm) and as a new kind of event fresh to the American mind. Nor is the image from Huntsville, home of the Redstone Arsenal, its Army Ballistic Missile Agency, and the Von Braun rocket team. Rather, it is the photo snapped a few hours after launch showing William H. Pickering, James van Allen and Wernher von Braun holding up a model of the satellite at an early morning news conference in Washington, D.C. The image captures the triumph those men, and many others around the United States, felt with the launch of the first American satellite less than four months after Sputnik I had delivered its "shock of the century". Let's contemplate for a few moments the context, the details and the significance of that photo.

First the context. Why are Explorer 1's three most important people in Washington, D.C.? As you might have guessed, it has little to do with technical duties and everything to do with publicity. Having seen the media circus surrounding the failed "4-foot launch" of the Navy's Vanguard the previous month, von Braun, Pickering and van Allen were sent to Washington, much to their dismay, for a planned press conference intended to divert some of the attention from the launch site itself. The hours before launch found them in the Pentagon, where they kept track of events via teletype at the Army communications center. After the successful launch they crossed the Potomac in a chauffeured car on a cold rainy Washington night, and arrived at the National Academy of Sciences building, site of the 1 am press conference. It was now February 1; the stage was set for the iconic photo.

Let's take a look in more detail at the photo itself. The eye is drawn first to the three men, each the subject of a biography in 2007 (see Further Reading below). As von Braun, van Allen and Pickering held the model of Explorer 1 aloft in the early morning hours of February 1, 1958, each had come to the moment by diverse personal pathways.

Von Braun was born in 1912, and his path had originated in Germany, where he developed the world's first large rocket, the V-2, in the context of Hitler's Nazi Germany. The story of the transfer of 120 Germans to the United States as part of Project Paperclip, their time at Ft. Bliss and White Sands testing V-2 rockets, and their arrival and work at the Army's Redstone Arsenal in Huntsville, Alabama developing a more powerful ballistic missile, is well-known. Von Braun and his team provided the Jupiter-C (Juno) first stage that launched Explorer 1. As von Braun had hoped all along, what was once a weapon was turned toward the exploration of outer space.

Pickering (born in 1910 and therefore two years older than von Braun) was a New Zealander who was intrigued by radio communication at an early age, came as a student to Caltech, and joined its faculty in 1936. Both as a graduate student and faculty member he worked with Nobelist Robert Millikan on the new field of cosmic rays, developing instrumentation for determining their directional characteristics using an array of Geiger counters. He also developed lightweight instrument packages for high-altitude balloons, good practice for what was to come. During World War II, Pickering worked on rocket technology for the Army at Caltech's Jet Propulsion Laboratory. He became it director in 1954, and oversaw the development of its early Corporal and Sergeant rockets. During this time he met Wernher von Braun. In addition to their role in the Sergeant rockets in the upper stages of the Explorer 1 launch vehicle, Pickering's group would provide the satellite itself. Pickering would remain director of JPL until 1976, the year before von Braun's death.

Van Allen, born in 1914 and so two years von Braun's junior, was the all-American boy from Iowa. His interest in science was stimulated at Iowa Wesleyan College, where he helped prepare instruments for the second Byrd Antarctic Expedition. He also did work on magnetism with an eye toward geophysical applications. After graduate work at the University of Iowa, and wartime work at the Carnegie Institution of Washington's Department of Terrestrial Magnetism and the Applied Physics Laboratory, already in 1946 van Allen became involved in using von Braun's captured V-2 rockets for cosmic ray research. In 1951 he returned to the University of Iowa as the chairman of its physics department. In furtherance of his cosmic ray research, he pioneered balloon-launched rocket sondes, and the launch of Sputnik found him on a research ship in the Pacific carrying out his "Rockoon" program. Because of their previous work, Van Allen and his group were well-placed to develop a scientific payload for America's first satellite, which was supposed to be the Navy's Vanguard. But van Allen had hedged his bets by keeping in contact with Ernst Stuhlinger in von Braun's Huntsville group, and made sure the payload would also fit on the Army's Jupiter-C rocket. With the launch of Sputnik and the failure of Vanguard, van Allen's experiments indeed first flew on Explorer 1. He had a long and productive career, dying in 2006.

Each of these three men thus represented a component of Explorer 1's success: the rocket, the satellite and the science payload. Each represented an institutional underpinning crucial to the fledgling American space program: the Army, the Jet Propulsion Laboratory and scientific research as represented by the University of Iowa. Each had converged from his own path to the singular moment depicted in the triumphal image.

In that image, after the men the eye is drawn to the object they are holding, the satellite itself. On Pickering's end is the fourth stage scaled-down Sergeant rocket that he had helped develop. On the right side, over von Braun's head, is the instrumentation section of the satellite. It is made of stainless steel only a fraction of a millimeter thick. The stripes are not for decoration. Rather, they are the "passive thermal control system," the alternating eight white stripes allowing the instrument compartment to maintain a temperature between 43 and 104 degrees Fahrenheit. Inside the instrument package are three types of experiments: van Allen's cosmic ray experiment (a Geiger counter), two types of micrometeorite detectors, and temperature sensors. Van Allen's experiment was used in conjunction with subsequent satellites to detect and map what became known as the van Allen radiation belts. The micrometeorite detectors were intended to characterize the space environment for future satellites, and to help gauge how they might be endangered by high velocity small particles in the new uncharted ocean of space. The third experiment, the temperature sensors, measured temperature around the spacecraft. Also important are the wires extending off the satellite; they were used in conjunction with the radio transmitters, which carried the first transistors ever into outer space, to send data to the newly formed Mini-track stations below.

On the table in front of this scene is a model of the launch vehicle, reminding us of the intense rivalry between the Navy's Vanguard and the Army Ballistic Missile Agency rocket built in Huntsville. Its first stage is a Juno rocket, a modified Jupiter-C from the Redstone Arsenal, with a V-2 pedigree going back to World War II. The second stage is a ring of 11 modified Sergeant solid-propellant motors, with three more for the third stage. These upper stages include the cylindrical "spinning tub," started 10 minutes before launch and revolving at 750 rpm during launch, to help even out the thrust of the clustered motors and provide gyroscopic stability. The fourth stage is that single scaled-back Sergeant rocket. The first stage engine delivered 83,000 pounds of thrust, and each Sergeant rocket 16,500 pounds. All of this to launch a payload of 31.5 pounds, including the attached burned-out fourth stage, 1/20th of one percent of the initial mass. It was at the same time awesomely wonderful and awesomely inefficient – a problem still with us today even with much larger engines.

Many elements thus came together to compose this iconic image – the setting, the people, the technology, the politics, and the media itself, present in the knowledge that the event was bound to be of historic proportions. No one knew quite how historic. All things have a beginning, and for the United States in space, this was it, eight months before NASA even became operational. Out of small beginnings grew great things. One could hardly have known what this singular event would set off during the next 50 years. For some visionaries it has been a disappointment, for others an inspiration, for yet others a diversion of resources better used on Earthly problems. But like the railroad and the airplane, spaceflight has impacted society in ways even the visionaries could not have foreseen, and that we cannot fully fathom even today.

Gruntman, Mike. Blazing the Trail: The Early History of Spacecraft and Rocketry (AIAA, 2004).