Under the Moons of Mars

Editor's Note: This is the 27th in a series of essays on exploration by NASA's Chief Historian, Steven J. Dick.

A recent conference on the moons of Mars reminded me of the wonders that await us even in our own solar system. The two tiny moons, Phobos and Deimos, have a storied history. Long before their discovery in 1877, Johannes Kepler speculated that since the Earth had one moon and Jupiter had four known in his time, Mars might have two moons since it orbits between Earth and Jupiter. In 1726 Jonathan Swift, probably influenced by this speculation, wrote in Gulliver's Travels that the scientists of Laputa discovered "two lesser stars, or satellites, which revolve about Mars."

In real life, however, all searches failed until the American astronomer Asaph Hall discovered them using the giant 26-inch refractor of the U. S. Naval Observatory in Washington, D.C. The discovery was made because Hall came to doubt the conventional wisdom that Mars had no moon, and because he searched much closer to the planet than others had. In the early morning of August 17, 1877, having been urged on in the search by his wife Chloe Angeline Stickney, Hall made the remarkable discovery: not one, but two moons that traveled so close to Mars that they were within the glare of the planet. The inner moon was brighter, and zipped around Mars in less than 8 hours, faster than the planet's own rotation – instead of taking a leisurely month as does our Moon. To a hypothetical Martian, the inner moon would rise in the west and set in the east, and pass through all its phases in a few hours. The news took both the public and the astronomical world by storm. Hall chose to name the inner satellite Phobos (Flight) and the outer satellite Deimos (Fear), based on Homer's Illiad, where Phobos and Deimos are the attendants, or sons, of Mars. 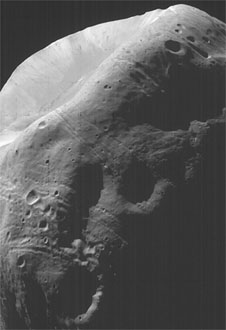 Over the next century, the moons were revealed to be even stranger. It was recognized almost immediately from their brightness that they were small, maybe six or seven miles in diameter. Then in the mid-20th century, observations showed that Phobos was slowly spiraling into Mars, and would crash into the planet in less than 100 million years, an eyeblink in astronomical terms. Reputable scientists even suggested this motion might be explained by hollow artificial satellites lofted by the Martians. Alas, it is now known to be due to solid tidal interaction with Mars.

It took the space age to reveal the real nature of the moons. In 1971 the Mariner 9 spacecraft – the same one that showed Mars to have river-like dry channels – revealed that the moons were potato-shaped, and indeed only a few miles in size along their longest axis. In the 1970s surface features were given names, with Phobos landmarks named after individuals involved with its discovery, and Deimos features named after literary and artistic allusions. Thus on Phobos we find Hall and Stickney (with the latter much the larger), while Deimos sports Swift and Voltaire. The two tiny objects were no longer mere points of light, but new worlds with their own "geography."

Much greater resolution was achieved when the two Viking Orbiters flew within a few hundred kilometers of the surfaces of the moons in the summer and fall of 1976, then as close as 100 to 300 kilometers in February and May 1977, detecting features as small as 10 to 200 meters. In October 1977 Viking Orbiter II flew less than 30 kilometers from Deimos. The low resolution photos were useful in determining the sizes, shapes and rotational properties of the Martian satellites, while the higher resolution photos revealed small scale features such as surface fractures, crater chains, and wall slumping of craters. It was during a close flyby of Phobos in late 1976 that numerous mysterious grooves were discovered on the surface. More study showed they were likely associated with the crater Stickney, and may come from deep fractures under the surface. Deimos has no such grooves. A major objective of Vikings observations of the moons was to determine their composition through color measurements and mass determination, a goal in which it was only partially successful. In 1977 scientists noted that the surface of Phobos was similar to Type I or II carbonaceous chondrites and to the asteroid Ceres. From this the researchers inferred that Phobos and Deimos may have originated in the asteroid belt and were captured by Mars. Almost exactly one century after Hall had discovered the moons, enough information had been gleaned to speculate on their origin.

Further observations were made by the Soviet Phobos 2 mission in 1989, Mars Global Surveyor in 1998 and 2003, and the European's Mars Express beginning in 2004. The latter continues to make sporadic close flybys of Phobos with high resolution imaging, and the Mars Reconnaissance Orbiter is also studying the spectral properties of the Martian moons as part of its larger Mars mission. Thanks to the Mars Exploration Rovers Spirit and Opportunity, we even know how the moons appear from the surface -- as tiny dots due to their small size. Unlike the Earth, the Martian surface will not be moonlit, despite having two moons instead of one. 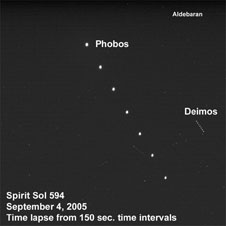 Taking advantage of extra solar energy collected during the day, NASA's Mars Exploration Rover Spirit settled in for an evening of stargazing, photographing the two moons of Mars as they crossed the night sky. Spirit took this succession of images at 150-second intervals from a perch atop "Husband Hill" in Gusev Crater on Martian day, or sol, 594 (Sept. 4, 2005), as the faster-moving Martian moon Phobos was passing Deimos in the night sky. Phobos is the brighter object on the left and Deimos is the dimmer object on the right. Image Credit: NASA/JPL/Cornell/Texas A&M

Despite these advances, a great deal remains unknown about the moons of Mars, including even their basic composition and their origin. The attendees at the First International Conference on the Exploration on Phobos and Deimos discussed what was known, what was unknown, and how to find out more. Most continue to believe the moons are captured asteroids, but the capture mechanism is unknown and the scenarios unlikely. Some believe rings of Mars may exist – just as they do around Jupiter, Saturn, Uranus and Neptune. Surprisingly, the fact they have not yet been seen is no proof of their absence – gossamer dust rings might be so thin that even spacecraft instruments have not yet seen them. In any case, it seems the two moons may hold the secret to the evolution of small bodies in the solar system. Conferees discussed the possibility of both human and robotic missions to the moons, and their possible use as outposts for the study of Mars close-up. As various studies have emphasized since 1981, landing humans on the moons of Mars would save a considerable amount of money because the liftoff for return to Earth is much easier from such small bodies with less gravity.

The moons of Mars have often been featured in popular culture, beginning (aside from Jonathan Swift) with the Mars novels of Edgar Rice Burroughs at the beginning of the 20th century. In 1955 science fiction writer Donald Wollheim published his bracing adventure novel The Secret of the Martian Moons (I still have my copy!). In Kim Stanley Robinson's Mars trilogy the first colonists to Mars build a city within the crater Stickney. More recently novelist Tom Mallon set his story Two Moons in 1877 Washington, D.C., and Ty Drago wrote his debut novel Phobos. Some video games even feature Phobos. Meanwhile, NASA continues to study its options for exploration of the Mars system, including even a human mission to a near earth asteroid, which may resemble the moons of Mars.

Today, 130 years after Asaph Hall's discovery, Phobos and Deimos still hold their secrets. As missions to Mars continue in the 21st century, they are likely to receive increased attention from both science and the general public. And these are only two of the 169 known moons of the solar system – each with its own history and mystery, each awaiting exploration.

Lunar and Planetary Institute, First International Conference on the Exploration of Phobos and Deimos, Nov. 5-7, 2007. Program and abstracts at http://www.lpi.usra.edu/meetings/phobosdeimos2007/phobosdeimos2007.authorindex.shtml.