Editor's Note: This is the 26th in a series of essays on exploration by NASA's Chief Historian, Steven J. Dick.

The recent publication in the NASA History series of Michael Melzer's Mission to Jupiter: A History of the Galileo Project details another extraordinary voyage of exploration, and highlights the trials, tribulations and triumphs in the long process required for success in planetary science. The Galileo spacecraft was launched Oct. 18, 1989, arrived at Jupiter on Dec. 7, 1995, and undertook its tour of Jupiter over the next two years.

This Prime Mission would have been quite enough to declare success, but it was followed by the Galileo Europa Mission, extending for two more years until December 1999. During this time the spacecraft studied not only studied Europa but also other Jovian satellites, especially (and appropriately) the other "Galilean satellites" discovered by Galileo almost 400 years before. Aside from satellites, the Galileo spacecraft would also study the magnetic fields, particles and atmosphere of Jupiter itself, notably with its releasable Atmospheric Probe. Even then, Galileo's explorations were not over; its lifetime was further extended by the Galileo Millennium Mission, which ran from January, 2000 through the end of mission operations in January 2003. Galileo's death occurred by design when it was sent on a collision course with Jupiter on Sept. 21, 2003 and burned up in Jupiter's dense atmosphere.

Galileo represented a new phase in the study of the outer planets. The Pioneer probes and Voyagers 1 and 2 together completed the preliminary reconnaissance of those gas giants. But Galileo undertook a much more systematic, in-depth, and holistic analysis of the entire Jupiter system, featuring close flybys of its satellites, and intense study of its particles and fields. And even before the spacecraft reached Jupiter it visited Venus, two asteroids, and twice returned to Earth, along the way observing a spectacular celestial crash. 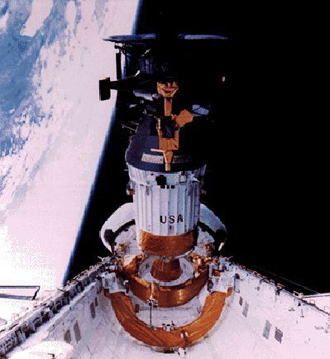 The Galileo spacecraft and its Inertial Upper Stage booster rocket were deployed from the space shuttle Atlantis October 18, 1989. Shortly thereafter, the booster rocket fired and separated, sending Galileo on its six-year journey to the planet Jupiter. Upon its arrival at Jupiter in December 1995, Galileo released a probe into the atmosphere to survey the composition of the planet's clouds. The orbiter has relayed probe information, surveyed its surroundings, and photographed Jupiter and the Galilean satellites, among others. Image credit: NASA.

Like many spacecraft, Galileo had an extended and painful birth. The total mission from launch to destruction lasted 14 years, but the "Jupiter Orbiter Probe" project from which it emerged had begun another 14 years before launch. Funding was won from Congress in 1977 and the project was renamed Galileo the following year. The spacecraft was originally scheduled to be deployed in 1984 aboard the Space Shuttle, which would not fly its first mission until April 1981. Once deployed in Earth orbit, the plan was for it to be launched by a Centaur upper stage toward Jupiter. Meanwhile, in the early 1980s the ever-watchful Office of Management and Budget proposed not only that Galileo should be cancelled, but that planetary exploration should be halted and JPL shut down. All three made it through that crisis, and in December 1985 the spacecraft was transported to the Kennedy Space Center for launch on the Shuttle Atlantis.

The following month, in one of NASA's tragic and memorable moments, the Space Shuttle Challenger was lost with all its crew at launch. Return to flight for the Shuttle program would take almost three years. During that time it was decided the liquid-hydrogen-fueled Centaur was too dangerous to take aboard the Shuttle, and that a solid-fueled Inertial Upper Stage would be used instead. Because of the lower thrust of the IUS, and in order to minimize fuel consumption, Venus and two Earth gravity assists (affectionately termed VEEGA) replaced the direct trajectory, greatly lengthening the travel time to Jupiter.

Like its birth, Galileo's journey was full of drama -- as full as any of the ocean voyages in the Age of Discovery (minus the natives). Four months after launch it reached Venus for the first gravity assist. By December 1990 the spacecraft had returned to Earth for another gravity assist. Several months later, the mission encountered a major problem. Now far enough from the Sun, attempts were made to deploy its high gain antenna, but to no avail. That meant data return would be severely limited. Engineers were forced to use the low gain antenna, analogous to using a dim light bulb compared to a powerful searchlight. Nevertheless, in due course and with a great deal of patience and ingenuity, 70 percent of the mission's scientific goals were completed. In the midst of this problem the spacecraft proceeded to the asteroid belt, where Galileo encountered Gaspra on October 29, 1991, capturing spectacular images. A year later it was back to Earth for its second Earth gravity assist.

On Aug. 28, 1993 Galileo was in the asteroid belt again, encountering Ida at a distance of only 1,500 miles. Among other surprises, images examined months later revealed a moon of Ida, later named Dactyl. Finally Jupiter was in Galileo's sights, but meanwhile unprecedented events were unfolding at Galileo's final destination. Comet Shoemaker-Levy 9 had broken up, and from July 16-29, 1994 21 pieces of the comet collided with Jupiter, giving it a spectacular series of "black eyes."

Still 140 million miles from Jupiter, Galileo captured images nonetheless, even as most telescopes on (and orbiting) Earth were trained on the event from their much more distant vantage point. At the U. S. Naval Observatory where I was working at the time, I recall our astonishment that we could see the dark splotches on Jupiter, even with small telescopes and from the middle of Washington, D.C. A year later, at 39 million miles from Jupiter, Galileo survived the most intense interplanetary dust storm ever recorded. At about this time, with 147 days to go to Jupiter, the Jupiter Atmospheric Probe separated from Galileo, in freefall toward its destination. 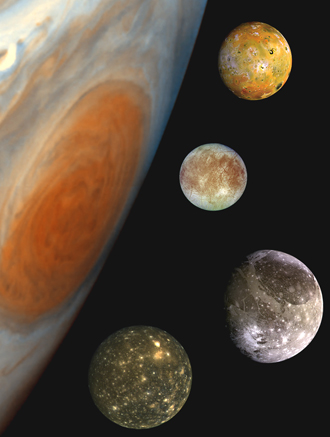 This "family portrait," a composite of the Jovian system, includes the edge of Jupiter with its Great Red Spot, and Jupiter's four largest moons, known as the Galilean satellites. From top to bottom, the moons shown are Io, Europa, Ganymede and Callisto. Europa, the smallest of the four moons, is about the size of Earth's moon, while Ganymede is the largest moon in the solar system. North is at the top of this composite picture in which the massive planet and its largest satellites have all been scaled to a common factor of 15 kilometers (9 miles) per picture element. The Solid State Imaging (CCD) system aboard NASA's Galileo spacecraft obtained the Jupiter, Io and Ganymede images in June 1996, while the Europa images were obtained in September 1996. Because Galileo focused on high resolution imaging of regional areas on Callisto rather than global coverage, the portrait of Callisto is from the 1979 flyby of NASA's Voyager spacecraft. Image credit: NASA.

By the time Galileo finally arrived at the Jupiter system in December 1995, the comet impact sites had dissipated. But the spacecraft had plenty to observe. On the day of arrival the Atmospheric Probe plunged into Jupiter, slowed by drogue parachutes, while Galileo flew by Europa and Io. The spacecraft then settled down to its Prime Mission Orbiter tour, which consisted of 11 orbits of Jupiter. They were not normal orbits, but orbits that unfolded in a flower petal pattern while maximizing scientific visits to the Jovian moons. Thus, the first orbit lasted 7 months, culminating in a close encounter with Ganymede. Ganymede, Callisto and Europa were visited multiple times over the next two years as part of the Prime Mission. During the extended Galileo Europa Mission, Io was also visited, mapping its cloud of charged particles and the density of sulfur streaming from Io's erupting volcanoes.

Further observations of Io and Jovian system dynamics were made during the Millennium Mission extension, including the eruptions of Io's Loki volcano, the largest and most powerful in the solar system. Europa proved no less fascinating, with its water-ice surface and large ocean lurking beneath. And the Atmospheric Probe results proved revolutionary. As Melzer puts it, Probe data "made it necessary for scientists to revisit many of their beliefs about the formation and evolution of our solar system's giant gaseous planets. Measurements of atmospheric composition, wind velocities, temperatures, cloud characteristics, electrical storms and elemental and molecular abundances painted a very different picture of Jupiter from what was expected." Galileo found a turbulent Jovian atmosphere, complete with lightning and thunderstorms a thousand times the size of those on Earth. Distinct from the Pioneer and Voyager planetary flyby missions, Galileo was the first to orbit the giant planet, and completed a total of 34 orbits by the end of its mission in 2003.

Melzer also makes clear how complex spacecraft development has become, both in terms of institutions, technology and highly trained individuals interacting at many levels. The lead NASA field center for the project was the Jet Propulsion Laboratory in Pasadena, California, with oversight from the Solar System Exploration Division at NASA Headquarters in Washington. NASA's Ames Research Center developed the Jupiter probe that entered the planet's atmosphere. NASA's Lewis Research Center (now Glenn) in Cleveland helped design the spacecraft propulsion system and integrate the payload with the shuttle. The shuttle itself, as well as the astronauts, were under the jurisdiction of Johnson Space Center in Texas, while Kennedy Space Center provided the launch facilities. The Department of Energy provided the controversial plutonium-powered electrical generators for the spacecraft. Finally, the Galileo project involved international cooperation with the Federal Republic of Germany, which provided instrumentation, propulsion for the Orbiter and additional telemetry from the German Space Operations Center.

Galileo the man would have marveled at Galileo the machine. And we should marvel too at what we can do, and see, in the new Age of Discovery.

Melzer, Michael. Mission to Jupiter: A History of the Galileo Project (NASA SP-2007-4231, NASA History Division, Washington, 2003). Available from the NASA Center for Aerospace Information, 301-621-0390, or online. This book is also available online at http://history.nasa.gov/sp4231.pdf.