Editor's Note: This is the 25th in a series of essays on exploration by NASA's Chief Historian, Steven J. Dick.

The epic journeys of Voyagers 1 and 2 are among the most astonishing tales of the Space Age. Originally planned to explore the gas giant planets and their satellites, which they did in brilliant fashion, they have continued their journeys and are now the most distant human objects in the cosmos, tossed out into the sea of space from our home planet.

Launched in the summer of 1977, both Voyager spacecraft were designed to last five years, and both encountered Jupiter and Saturn between 1979 and 1981. After the flyby of Saturn's moon Titan, Voyager 1 took a trajectory north of Saturn's orbital plane out of the solar system, while Voyager 2 headed onward to Uranus and Neptune, courtesy of a gravity assist and a rare planetary alignment. After encountering Uranus in 1986 and Neptune in 1989, Voyager 2 took a southward trajectory out of the solar system. The last Voyager images were taken Valentine's Day, 1990, when Voyager 1 looked back from 3.7 billion miles to take a portrait of seven of the nine planets in our own solar system, including the "pale blue dot" that is Earth. The data the Voyagers returned revolutionized our knowledge of the outer planets and their intriguing panoply of satellites.

It would have been an extraordinary voyage had it ended there. But it did not. In 1989 the missions were jointly renamed the Voyager Interstellar Mission. Both Voyagers continued their journeys, Voyager 1 heading northward at about 320 million miles per year, and Voyager 2 heading southward at the slower rate of 290 million miles per year. As we enter 2007 Voyager 1 is more than 100 astronomical units distant (one AU is the distance from the Earth to the Sun), about 9.5 billion miles, with Voyager 2 trailing on its southward journey. Both are way beyond the dwarf planet Pluto, which averages 40 astronomical units from the Sun and was formerly considered the edge of the solar system.

Both Voyagers are also well beyond their trailblazing predecessor spacecraft, Pioneer 10 and 11. The Pioneer 10 spacecraft, which returned the first close-up images of Jupiter in 1973 and was for many years the most distant spacecraft from Earth, was passed in 1998 by Voyager 1 at a distance of 69 astronomical units. Communications were lost in 2003, but Pioneer 10, with its famous engraved plaque message, continues onward behind the Voyagers. Communication with its sister ship, Pioneer 11, was lost in 1995, but it too continues its outward journey at a slower rate than the Voyagers.

The Voyager Interstellar Mission therefore provides an opportunity to explore for the first time uncharted territory – interstellar space. These journeys now raise an interesting practical question – where does the solar system end and interstellar space begin? The answer requires a sojourn into the celestial cartography of our solar system's edge. That edge, it turns out, is defined not by objects or barriers, but by the phenomenon of the wind from the Sun. Early spacecraft discovered a steady stream of electrically charged gas flowing from the Sun; we now know that it creates a bubble called the heliosphere (see image below). The solar wind travels outward at speeds of 700,000 to 1.5 million miles per hour, until it begins to feel the effects of the interstellar wind composed of gas from other stars. At this point, called the "termination shock," the speed of the solar wind slows abruptly. Continuing outward, the solar wind comes to a boundary where the pressure of the two winds is in balance, a point called the "heliopause". Here a bow shock is created like that of a boat moving through water. Beyond the heliopause is interstellar space. 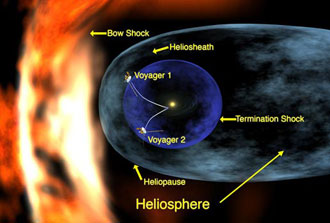 Locations of Voyager 1 & 2: Voyager 1 is traveling faster, and reached the termination shock sooner. The dramatic orange border to the left represents the bow shock, a theoretical area created as interstellar gas runs into the solar atmosphere. The location of the termination shock, or the boundary into the area where interstellar gas and solar wind start to mix, has been a mystery to scientists because it moves with regard to the power of the solar wind. Image credit: NASA.

Although the Hubble Space Telescope has photographed examples of this bow shock around other stars, the precise locations of the termination shock and heliopause for our solar system have been matters of conjecture. Until now, that is. On December 16, 2004, the magnetometers aboard Voyager 1 showed a sudden increase in the surrounding magnetic field, the result of a solar wind slowdown. At approximately 8.7 billion miles from the Sun (94 astronomical units) Voyager 1 passed the termination shock and entered the heliosheath. "Voyager 1 has entered the final lap on its race to the edge of interstellar space," Voyager project scientist Ed Stone remarked at the time. Voyager 2, now at about 82 astronomical units, will cross the termination shock in the next few years, certainly by 2010. The exact timing in uncertain because the boundary changes with changing conditions on the Sun, such as the sunspot cycle.

What Voyager 1 did not find at the termination shock is as important as what it did find. As expected, it found a steady source of low-energy protons. It was also expected that the termination shock was the source of something called "anomalous cosmic ray helium." But the intensity of these cosmic rays did not peak at the shock, indicating that the termination shock (at least in the vicinity of Voyager 1) was not the source of this type of cosmic ray. Scientists consider it a "shocking" result. As Len Fisk (a former head of space science at NASA) said in the Science magazine cover story where the Voyager 1 results were announced, "Once again the mantra of space exploration is fulfilled: when we go somewhere that is new, we find the unexpected, and that's what makes it so exciting."

It will take another 10 or 20 years for Voyager 1 to reach the edge of the heliopause and enter true interstellar space. It will indeed be a race, not between Voyagers 1 and 2, but with the electrical power supply that provides communication with the spacecraft. At these immense distances from the Sun, solar arrays are useless and nuclear power is used. But even the radioisotope thermoelectric generators (RTGs) aboard Voyager have a limited lifetime, and it is entirely possible the Voyagers will pass silently into interstellar space.

Even if communications are lost, the silence will not be total. Long after last contact with Earth, the Voyagers will continue their interstellar journeys. Aside from the technological message represented by the spacecraft themselves, both spacecraft carry a more explicit message from Earth. The Voyager interstellar records attached to each spacecraft carry images, sounds, music, and greetings in 55 languages. In some ways these time capsules from Earth already seem quaint even to us in the age of CDs and DvDs. How much more quaint will they seem to any extraterrestrial civilizations that may intercept them? But even if the messages cannot be deciphered, the spacecraft themselves will be mute testimony that our species, perhaps one among many, has entered the new ocean of space. 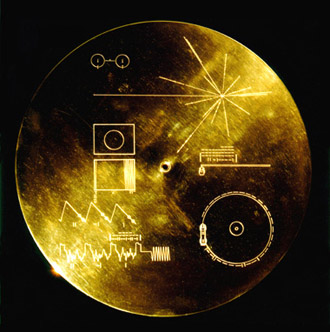 Voyager 1 and 2 carry a golden record, intended to communicate a story of our world to extraterrestrials. The Voyager message is carried by a phonograph record – a 12-inch gold-plated copper disk containing sounds and images selected to portray the diversity of life and culture on Earth. The contents of the record were selected for NASA by a committee chaired by Carl Sagan of Cornell University. More information on the record is available at http://voyager.jpl.nasa.gov/spacecraft/goldenrec.html, and in Sagan's book cited below. Image credit: NASA.

Dethloff, Henry C. and Ronald A. Schorn. To the Outer Planets and Beyond: Voyager's Grand Tour (Smithsonian Institution Press, 2003).