Editor's Note: This is the 24th in a series of essays on exploration by NASA's Chief Historian, Steven J. Dick.

The recent award of the Nobel Prize in Physics to NASA astrophysicist John Mather and University of California Berkeley astrophysicist George Smoot reminds us that NASA not only undertakes voyages in space, but also in time. Thanks to the finite speed of light, NASA has even succeeded in making several voyages to the beginning of time, and that is what the Nobel Prize "for the discovery of the blackbody form and anisotropy of the cosmic microwave background radiation" is all about.

Because light travels at "only" 186,282 miles per second, when we see the Moon we are seeing it as it existed a little more than a second ago. Light time from Jupiter is nearly 50 minutes at its most distant, and light from Pluto at the edge of the solar system can exceed four hours. For objects beyond the solar system we begin to see just how small our planetary system is in the scheme of things. The nearest star, Proxima Centauri, is 4.5 light years distant, and some objects we see in the sky are hundreds or thousands of light years away. On a clear night in the Southern Hemisphere you can see the Magellanic Clouds as they existed half a million years ago, and in the Northern Hemisphere, the smudge in the constellation Andromeda marks the Andromeda Galaxy, some 2.2 million light years distant.

All of this can be done with the naked eye, but the telescope is a real time machine. With it we can now see billions of light years away, and thus billions of years back in time. The achievement of the new Nobel Prize winners, using instruments on NASA's Cosmic Background Explorer (COBE), is that they were able to see details of the remnants of the Big Bang almost to the beginning of time, within 300,000 years of that event some 13.7 billion years ago.

Let us put their discovery in historical perspective. The remnants of the Big Bang, in the form of radiation at a temperature of about 3 degrees Kelvin, were first detected from the ground in 1964. It is a famous, oft-told story of serendipitous discovery. Two AT&T Bell Laboratories researchers, Arno Penzias and Robert Wilson, were looking for noise contamination related to the passive communications satellite Echo 1, launched in 1959. Using the large Bell Labs horn antenna in Holmdel, New Jersey (built for the ECHO project), they found a persistent background radiation coming from all directions of the sky: the radiation was "isotropic," as scientists like to say. At first they thought the radiation was due to an instrument problem, or a pigeon problem, but try as they might, they were unable to eliminate it. This was the point of genius: instead of ignoring a slight problem, they consulted their theoretical astronomy colleagues down the road at Princeton University. Robert Dicke, James Peebles, David Wilkinson and Peter Roll immediately surmised Penzias and Wilson had found the leftover radiation from the creation of the universe, predicted in the 1940s by George Gamov, Ralph Alpher and Robert Herman. It was a "smoking gun" in favor of the Big Bang theory, which until that time had been locked in deadly battle with the Steady State theory as an explanation for the origin of the universe. The story was front-page news in the New York Times for May 21, 1965, and Penzias and Wilson shared the 1978 Nobel Prize in Physics "for their discovery of cosmic microwave background radiation."

As with all good scientific discoveries, the detection of the 3 degree (more accurately, 2.73 degree) isotropic blackbody radiation raised still more questions. In particular, if it was isotropic – coming equally from all directions of the sky – how did objects like galaxies form? Shouldn't there be some variation in the temperature of this radiation, however slight, that would provide the "seeds" for these future objects? In 1965, only seven years after its founding, NASA was in the midst of the Apollo program, and undertaking a variety of space missions. It could not yet contemplate observations of the delicate nature needed to observe the background radiation. But by the 1970s astronomers from the ground discovered a "dipole effect": the cosmic background radiation did indeed vary in two directions, at extremely small levels, due to the motion of the solar system and the resulting Doppler effect. This discovery inspired NASA astronomers to attempt an instrument that would measure intrinsic variations in the background radiation itself, rather than due to the effect of motion.

At Goddard Space Flight Center astronomers began to develop a satellite that could not only measure variations in the background radiation, but also prove that it was blackbody radiation – required if this was the real remnant of the Big Bang. After numerous delays due to various causes including the Space Shuttle Challenger disaster in 1986, the Cosmic Background Explorer (COBE) was launched in 1989 by a Delta rocket. It would return observations for four years. But within hours it had demonstrated that the radiation was indeed blackbody, and in a news conference April 3, 1992, Smoot announced COBE had observed "the oldest and largest structures ever seen in the early universe … the primordial seeds of modern-day structures such as galaxies, clusters of galaxies, and so on … huge ripples in the fabric of space-time left over from the creation period." And he uttered what became an instantly famous quote: "If you're religious, it's like seeing God." 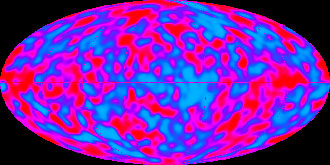 First all-sky map of cosmic background radiation, released in 1992 and based on 2 years of data returned from the Differential Mapping Radiometer of the Cosmic Background Explorer (COBE). The cosmic microwave background fluctuations are extremely faint (red is hotter), only one part in 100,000 compared to the 2.73 degree Kelvin average temperature of the radiation field. The cosmic microwave background radiation is a remnant of the Big Bang and the fluctuations are the imprint of density contrast in the early universe. The density ripples are believed to have given rise to the structures that populate the universe today: clusters of galaxies and vast regions devoid of galaxies. Even better 4-year COBE maps are available at http://lambda.gsfc.nasa.gov/product/cobe/dmr_image.cfm. Image credit: NASA/ DMR/COBE Science Team.

Despite its spectacular results, COBE had returned only a crude map of the variations in the background radiation. Its work was continued by high-altitude balloon experiments in Antarctica, but scientists wanted more. Thus was born the Wilkinson Microwave Anisotropy Probe (WMAP), named after Princeton's David Wilkinson, who died in 2002. It was launched in 2001, also with a Delta rocket, but into an orbit at the L2 Lagrangian point a million miles from Earth rather than in COBE's 600 mile circular orbit. One can surmise from the satellite's name what it was looking for – anisotropies (variations) in the microwave background, at higher resolution than COBE had achieved. WMAP's latest results (just recently released and shown below), fully confirmed and extended COBE's results. "It amazes me that we can say anything about what transpired within the first trillionth of a second of the universe, but we can," said Charles L. Bennett, WMAP principal investigator. The satellite also provided more evidence of the rapid "inflation" of the universe at its beginning, verifying and refining the leading theory of the origin of the universe. "We have never before been able to understand the infant universe with such precision. It appears that the infant universe had the kind of growth spurt that would alarm any mom or dad, Bennett quipped." 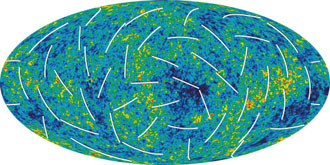 WMAP has produced a new, more detailed picture of the infant universe. Colors indicate "warmer" (red) and "cooler" (blue) spots. The white bars show the "polarization" direction of the oldest light. This new information helps to pinpoint when the first stars formed and provides new clues about events that transpired in the first trillionth of a second of the universe. Where COBE measured temperature variations to one part in 100,000, WMAP measures those variations to less than one part in a million. The image was released in March, 2006. Image credit: NASA/WMAP Science Team.

WMAP also achieved much more. It pinned down the age of the universe, within 100,000 years, to 13.7 billion years. It yielded information on the dark matter content of the universe. And it provided unprecedented detail on the origin of the universe and the evolution of the first stars and galaxies. WMAP had achieved its prime mission by September, 2003, but may remain operational until 2009. And it will be joined in its L2 orbit in 2007 by the European Space Agency's Planck satellite, which will refine our knowledge of the early universe even further.

Landmarks in the history of modern cosmology, COBE and WMAP are not exactly household words. But they should be, having finally provided answers to age-old questions of interest to anyone who has ever wondered about how our universe was created at the beginning of time.

Mather, John. The Very First Light: The True Inside Story of the Scientific Journey Back to the Dawn of the Universe (Basic Books: New York, 1998).