Editor's Note: This is the 20th in a series of essays on exploration by NASA's Chief Historian, Steven J. Dick.

No single essay can do justice to the events that took place between 1968 and 1972, four years that, as time passes, seem all the more remarkable for human history. During those years 24 men went to the Moon, three of them (Lovell, Cernan and Young) twice. Twelve of them orbited silently above the bleak lunar landscape, and three others were whipped around the Moon in a "free-return trajectory" in a desperate attempt to return to Earth after an explosion aboard their spacecraft. Twelve of the 24 lunar voyagers actually landed, spending in total some 300 hours on the surface, of which 80 hours were outside the lunar module with "boots on the ground" or actually driving around the spacecraft environs. These events seem incredible to us even now, as NASA makes plans to return humans to the Moon almost a half century later. 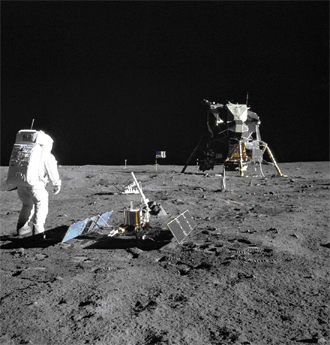 Astronaut Edwin E."Buzz" Aldrin Jr., Lunar Module pilot, is photographed during the Apollo 11 extravehicular activity on the Moon. He has just deployed the Early Apollo Scientific Experiments Package (EASEP). In the foreground is the Passive Seismic Experiment Package (PSEP); beyond it is the Laser Ranging Retro-Reflector (LR-3); in the center background is the United States flag; in the left background is the black and white lunar surface television camera; in the far right background is the Lunar Module "Eagle". Astronaut Neil A. Armstrong, commander, took this photograph with a 70mm lunar surface camera. Apollo 11 was the first lunar landing.

When the Apollo 11 crew landed on the Sea of Tranquility on July 20, 1969, they stayed a little less than a day, and Neil Armstrong and Buzz Aldrin traveled less than a half mile on foot. The last crew on Apollo 17 landed on the Taurus-Littrow highlands on December 11, 1972 and stayed for three days during which Harrison Schmitt and Eugene Cernan traveled some 19 miles in the lunar roving vehicle. Though human footprints are well preserved at the six landing sites, and rover tracks surround three of them, not a step has been taken on the lunar surface since that time.

It is well known that geopolitics, in the form of international rivalry with the , propelled these first human voyages to the Moon. In the wake of Soviet successes in space, the Moon program began on May 25, 1961 with President Kennedy's declaration that the United States would land a man on the Moon and return him safely to Earth "before this decade is out." The larger objective was for the nation "to take a clearly leading role in space achievement which in many ways may hold the key to our future on Earth . . . No single space project in this period will be more exciting or more impressive to mankind, or more important for the long-range exploration of space; and none will be so difficult or expensive to accomplish." While the importance of the Apollo missions is still debated, the difficulty and the expense are widely recognized. At the peak of the Apollo era, during one of the most tumultuous decades in American history, NASA expenditures constituted almost 4% of the federal discretionary budget. Since that time NASA's budget has remained relatively steady at less than 1%.

Eight years after President Kennedy's challenge the goal was met, but only after gargantuan efforts and funding resources unlikely ever to be seen again in the space program over such a short time span. Among those efforts was the construction of the Saturn V launch vehicle, led by the legendary Wernher von Braun at Marshall Space Flight Center, with Boeing, North American Aviation, and Douglas Aircraft Company as prime contractors for each of the Saturn stages. The Apollo spacecraft themselves – the 'chariots for Apollo' known more technically as the Command and Service Modules – were also the responsibility of North American Aviation. Hundreds of subcontractors, thousands of engineers, tens of thousands of workers and many unsung heroes played their roles in sending Americans to the Moon. The Saturn V was composed of 3 million parts, the CSM 2 million, the Lunar Module 1 million. As Apollo 11 astronaut Michael Collins put it, "All 6 million worked, nearly all the time."

Nor was it only a matter of building complex hardware and writing novel software for computers than now seem primitive but performed (mostly) magnificently. It was also a question of managing the largest technological system ever devised, as Administrator James Webb and his deputies Hugh Dryden and Bob Seamans sought to ensure high performance, reliability, and safety. In his book The Secret of Apollo Stephen Johnson has argued that a new approach known as systems management, originating from the Air Force's ICBM efforts, played a key role in the success of Apollo. Indeed, despite the tragic fire that killed three astronauts in their capsule during the Apollo 1 ground test in 1967, all the Apollo astronauts were returned safely to Earth, even with the harrowing experience of Apollo 13. 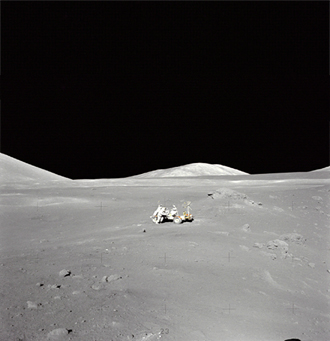 An extraordinary lunar panorama at Station 4 (Shorty Crater) showing Geologist-Astronaut Harrison H. Schmitt working at the Lunar Roving Vehicle (LRV) during the second Apollo 17 extravehicular activity (EVA-2) at the Taurus-Littrow landing site. This is the area where Schmitt first spotted a mysterious orange soil. Shorty Crater is to the right. The peak in the center background is Family Mountain. A portion of South Massif is on the horizon at the left edge. Apollo 17 was the last voyage of Apollo.

Was it all worth it? The Apollo program has been criticized for being driven by politics, dominated by engineers, and deaf to science; after all, the only scientist who traveled to the Moon was Harrison Schmitt on Apollo 17, the last voyage. What, in the end, did Apollo achieve? Aside from its geopolitical goals, and despite the clear backseat status of science, a considerable amount of science was in fact returned from the Moon. As Donald Beattie has described in his book Taking Science to the Moon, almost 5,000 pounds of experimental equipment were landed on the Moon, including the Apollo Lunar Surface Experiments Package (ALSEP) on each of the last five Apollo missions. 840 pounds of lunar material were returned and analyzed. 65 miles were traversed on foot or in the lunar rover in support of field geology and geophysical studies. And during the last three missions detailed data were collected from the orbiting command and service modules. The overall result is a much better understanding of the nature and origin of the Moon and its relation to Earth. The top ten science discoveries from the Apollo missions, as ranked by the office of the curator for planetary materials at NASA's , are found at http://www.lpi.usra.edu/expmoon/science/lunar10.html

But, with the hindsight of history, how real was the driving force – the race with the Soviets? In his definite study Challenge to Apollo: The Soviet Union and the Space Race, 1945-1974, Asif Siddiqi finds that there was indeed a Soviet quest for the Moon, but that it was lukewarm and failed dismally. "The road to failure began almost as soon as Gagarin had floated down in his parachute" in 1961, Siddiqi wrote. Nikita Khrushchev hardly took note of Kennedy's 1961 proclamation, and only sanctioned a piloted lunar landing program in 1964, the year he was ousted. The military, he writes, was more interested in missiles than the Moon, and amidst rivalries, organizational chaos and a shoestring budget, the Soviet effort led to crushing failures. During 1969-72, while Americans were landing on the Moon, the Soviet N1 rocket that was supposed to have beaten those Americans saw four catastrophic failures. Two of them failed in the months immediately preceding the Apollo 11 landing. The Soviet unmanned lunar program had more success. After failing in an attempt in February, 1969 – five months before Apollo 11 – they did land two Lunokhod ("Moon walker") rovers in 1970 and 1973. The Lunokhods returned more than 100,000 images and undertook numerous soil analyses. Although a triumph in their own right, they were completely overshadowed by the American manned landings. The Soviets never came close to landing humans – and still have not. In the wake of losing their half-hearted Moon race, the Soviets turned to space stations, an endeavor in which they excelled.

No one would have guessed in 1972 that almost a half century would pass before there was even the possibility that humans would return to the Moon. Though the Russians would manage several more lunar robotic missions, including a lunar sample return in 1976, it would be more than twenty years before Americans would return to the Moon even with a robotic emissary, the Clementine spacecraft, in 1995. Lunar Prospector followed in 1998, and the Lunar Reconnaissance Orbiter is on schedule to launch in 2008, intended as a vanguard to human missions now being planned by 2018.

How will history judge the voyages of Apollo? Pulitzer Prize historian Arthur M. Schlesinger Jr., a special assistant to President Kennedy, ventured one opinion when he wrote in 2004 "It has been almost a third of a century since human beings took a step on the Moon — rather as if no intrepid mariner had bothered after 1492 to follow up on Christopher Columbus. Yet 500 years from now (if humans have not blown up the planet), the 20th century will be remembered, if at all, as the century in which man began the exploration of space." Although an historian of politics and world affairs, Schlesinger did not rank war in the century's top ten events. Wars come and go and affect many people, but the first venture into space happens only once, and holds infinite promise.

On the other hand there are some, historians among them, who think the Apollo program was time and money misspent, and that analogies to are misplaced. In reviewing Andrew Chaikin's book A Man on the Moon in the New York Times Review of Books, historian of technology Alex Roland called Chaikin's retelling of the Apollo story "the great American legend of the late 20th century," replete with heroic astronauts and epic tales. Eschewing Apollo's role in exploration, and pointing to the lack of science on the missions, he downplayed the significance of the voyages of Apollo.

Critics are entitled to their opinions, but in my view the Apollo voyages were an accomplishment of mythic proportions, justifying mythic retellings. Although historians generally are not in the business of foretelling the future, in this case I have no qualms in predicting that, the longer our perspective grows, history will side with Mr. Schlesinger. Similarly, in the long view of history, the success or failure of NASA's current attempt to return humans to the Moon, go on to Mars and spread throughout the solar system will be judged accordingly. We are now in a test to see whether humans can be motivated by a journey of exploration rather than a race, by international cooperation rather than competition. History will be watching.

A tremendous amount of information on astronaut lunar surface activities.

Beattie, Donald A. Taking Science to the Moon: Lunar Experiments and the Apollo Program (