Editor's Note: This is the 17th in a series of essays on exploration by NASA's Chief Historian, Steven J. Dick.

Among the more adventurous voyages of exploration are those whose destinations are comets. Unlike planets, comets can be dangerous. They can be dangerous to our home planet, having impacted the Earth in the past, perhaps as recently as 1908 in Siberia, the famous "Tunguska event." They can also be dangerous if approached by spacecraft. As their highly eccentric orbits bring them closer to the Sun, comet nuclei may become active, often spewing jets of material, forming a coma surrounding the nucleus, and a tail that appears to spread across the sky. Occasionally comets are perturbed and collide with other objects; numerous comets have been observed diving into the Sun, and in 1994 a fragmented comet Shoemaker-Levy 9 smashed into Jupiter.

Although millions of miles away, historically the appearance of a comet brought fear and trepidation among those who believed they foretold plague and doom. They were also sometimes used for political purposes. When a comet appeared for seven days in July 44 BC, a few months after Julius Caesar's assassination, many Romans believed Caesar was ascending to the region of the immortal gods, a view of deification that his successor Augustus did nothing to discourage. Gradually, comets were seen as more benign, and most people are familiar with recent appearances like Comet Halley in 1986 and Comet Hale-Bopp in 1997. Even the latter, however, induced 39 members of the Heaven's Gate cult to commit suicide in San Diego, in the hope that their souls would hitch a ride on a spaceship they believed accompanied the comet.

By the 1970s quite a bit was known about comets based on telescopic observations from the ground. Already in the 1950s Harvard astronomer Fred Whipple had theorized that they were "icy conglomerates" composed mostly of ice with a mixture of dust, a model the press dubbed "dirty snowball." At about the same time astronomer Jan Oort postulated they came from a cloud of comets surrounding the solar system. Comets were also known to harbor complex organic molecules, thereby making them of great interest to those who study the origin of life on Earth. And, they were believed to be primordial bodies whose chemistry and physics could unlock the secrets of the formation of the solar system. But the real nature of comets remained unknown until they could be visited up close and personal.

Amazingly, over the last two decades a variety of spacecraft have done just that – voyaged to 6 of these denizens of the heavens. After completing its initial mission in 1982, the International Sun-Earth Explorer 3 was renamed the International Cometary Explorer (ICE) and sent to comet Giacobini-Zinner. It did so with very little remaining fuel, exploiting the gravitational instabilities of the Sun-Earth and Earth-Moon "Lagrangian points," and passing less than 100 miles over the Apollo 11 landing site as it received a lunar gravitational assist. ICE passed first through the plasma tail of the comet, some 26,550 kilometers behind the comet's nucleus, and on September 11, 1985 came within 7,800 kilometers of the nucleus. Due to the nature of its original mission, ICE carried no cameras, but measured the particles and fields surrounding the comet.

ICE was only a prelude to the flotilla of spacecraft sent to rendezvous the following year with the most famous comet in history, comet Halley. (Today comets are named after their discoverers; in the case of Halley's Comet, Edmond Halley was the first to calculate its orbit). Appearances of Halley have been recorded at least since 240 BC, and its 1066 passage was recorded in the Bayeux Tapestry. Halley's comet has a period of 76 years, the measure of a human lifespan, and when it returned to the Earth's vicinity in March, 1986 it was greeted by the "Halley Armada".

The Halley Armada consisted of two Russian spacecraft (Vega 1 and 2), two Japanese spacecraft (Sagigake and Suisei), and the European Space Agency's Giotto. ICE itself would observe Halley from a comfortable distance of more than 10 million kilometers, while the Japanese craft ventured within a million kilometers and the two Vega spacecraft came within 1000 kilometers (about 660 miles). Giotto would come closest of all, so close that navigators were worried about damage to the spacecraft. 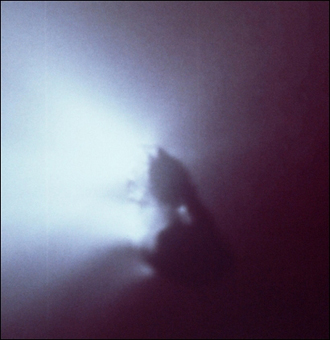 Giotto's encounter with Comet Halley provided the first ever opportunity to take images of a comet nucleus. The images were obtained with the Halley Multicolor Camera on Giotto. Credit: ESA

Giotto was named after the medieval Italian painter Giotto di Bondone, who had observed the comet during its 1301 passage and depicted it as the Star of Bethlehem in his painting "Adoration of the Magi." On March 14, 1986 Giotto passed within 600 km of Halley's nucleus. Two hours before close encounter, Giotto began to be hit by thousands of dust impacts. The spacecraft survived, and altogether more than 2000 images were returned from Giotto before its camera was destroyed. The images showed Halley's rough and porous nucleus to be a dark peanut-shaped body, 15 km long and 7 to 10 km wide. On the sunlit side three outgassing jets were seen. Of the volume of material ejected by Halley, 80% was water, 10% carbon monoxide, and 2.5% a mix of methane and ammonia. Halley's nucleus was blacker than soot, suggesting that dust was dominant rather than ice. It seemed Halley was more of a "snowy dirtball" rather than a dirty snowball.

Giotto was reawakened in 1990, and after a gravitational assist from the Earth (the first by a spacecraft coming from deep space), came within 200 kilometers of the nucleus of Comet Grigg-Skjellerup in July, 1992. Although no images were taken because the camera was destroyed during the Halley encounter, other instruments indicated the comet was much less dusty than Halley. Those instruments detected a somewhat higher magnetic field than at Halley, and unusual magnetic waves.

On September 22, 2001, eleven days after terrorist events shook the world, an American spacecraft known as Deep Space 1 flew with 1,350 miles of the nucleus of Comet Borrelly, capturing images of the second comet nucleus after Halley, this one about 8 kilometers long and 4 kilometers wide. A series of jets were again observed emanating from the surface.

In recent years space scientists have been even more ambitious. In 1999 NASA launched a comet sample return mission known as Stardust, the fourth in its Discovery series of spacecraft. In January 2004 the spacecraft flew within 149 miles of the nucleus of comet Wild 2, collected samples of comet dust, and stored them in a return capsule. After a roundtrip journey of some 2.88 billion miles, the capsule is scheduled to return to Earth with its precious sample on January 15, 2006. Along with interstellar dust also collected during the journey, the samples will be analyzed at NASA's Johnson Space Center.

Deep Impact, another NASA Discovery mission, brought yet another approach to comet exploration – impacting a comet and studying the subsequent debris for clues to the origin of the solar system. After a journey of 171 days and 268 million miles, on July 3, 2005 the Deep Impact flyby spacecraft released it 820 lb impactor on a course for Comet Tempel 1. The following day it impacted the comet's 14 kilometer-long nucleus at 23,000 miles per hour, producing a spectacular flash of light and a crater of undetermined depth. Analysis of the ejection plume showed large amounts of organic material, confirming that during its history the Earth might have been infused with organics from similar comets. In addition, images from three cameras showed what appear to be impact craters, never before seen on a comet and of unknown origin. Other data indicates that the nucleus is extremely porous, a fluffy structure weaker than powdered snow. 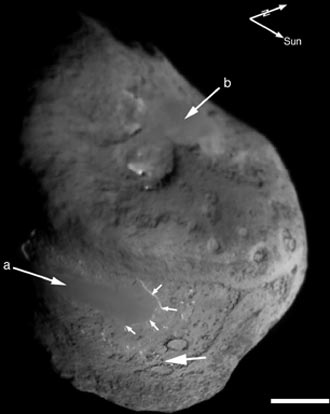 Composite image of Comet Tempel 1, with data from Deep Impact's three cameras. Arrows a and b point to large, smooth regions. The impact site is indicated by the third large arrow. The scale bar is 1 km and the two arrows above the nucleus point to the sun and the rotational axis of the nucleus. Credit: NASA/JPL/UMd

Whether only passing through the comet's coma or tail (Giacobini-Zinner and Grigg-Skjellerup), capturing images of the comet nucleus (Halley, Borrelly, Tempel 1 and Wild 2), or actually returning samples (Wild 2), humanity's intrepid robotic explorers have added to our knowledge in the true spirit of exploring the unknown.

Along with the successes have come failures, most notably NASA's CONTOUR mission. Launched in July, 2003, little more than a month later communication was lost with the spacecraft as its motor fired to send it on its way to comet Encke. Only pieces of debris were detected. The Mishap Investigation Board identified four possible causes, any one of them catastrophic. We can sympathize with those who spent years working on this mission, only to see it end up in pieces. Their only consolation is one known to explorers throughout history: along with the prospect of success comes the risk of failure.

Space explorers will keep trying. In March 2004 the European Space Agency launched Rosetta on a ten year journey to Comet 67P/Churyumov-Gerasimenko. In another example of an incredible journey planned by space navigators, Rosetta flew by the Earth last month, will fly by Mars in February, 2007, and will make two more Earth flybys before reaching its destination in early 2014. Unlike past missions, Rosetta includes an orbiter that will allow long-term mapping of the comet, and, in the ultimate adventure, a lander that will touchdown in November 2014, if all goes well.