Editor's Note: This is the 14th in a series of essays on exploration by NASA's Chief Historian, Steven J. Dick.

In the second essay in this series I wrote about the problem of balancing risk and exploration. The recent flight of Space Shuttle Discovery, the ongoing debate over Hubble Space Telescope servicing, and the general activities of space programs around the world demonstrate that risk and exploration is an issue that will not go away.

There is good reason for this. The volume on Risk and Exploration: Earth, Sea and the Stars, just published by the NASA History Division and based on a meeting discussed in that second essay, makes clear why. It points to three conclusions: 1) exploration is necessary for a creative society; 2) exploration requires clear goals despite its open-ended nature; and 3) risk is the inevitable companion of exploration. 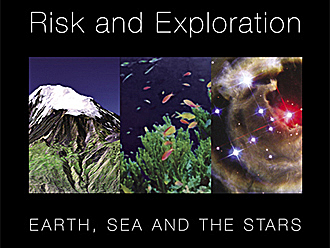 There are some timid souls who will never get past the first point. John Chatterton, who risked his life to discover the German submarine U-869 at a depth of 230 feet off the New Jersey coast, spoke for many when he asked "Why go through all this? It has to do with challenge. It has to do with perseverance. It has to do with who we are, not just as individuals, but, really, as a culture. Exploration is very much who we are, and we really have two choices. We either continue on a path of exploration, or we quit." Chatterton and his colleagues did not quit, and solved a World War II mystery. Their adventures were subsequently described in the book Shadow Divers. This was only one of many adventures in exploration described at a meeting full of explorers of Earth, sea and space. Some participants remarked that if we wanted to avoid risk we could all just sit in Barcaloungers and watch TV. Is that the culture we want? And note the obesity risk.

During the meeting Jack Stuster, author of Bold Endeavors: Lessons from Polar and Space Exploration, quoted Norwegian scientist and explorer Fridtjof Nansen as saying "The history of the human race is a continual struggle from darkness toward light. It is therefore to no purpose to discuss the use of knowledge. Man wants to know, and when he ceases to do so, he is no longer man." In my experience there are two kinds of people in the world: those who are inspired by those words, and those who think it is sentimental rubbish. The latter are likely never to be convinced that humans should go to Mars. The cost-benefit analysis would not show any economic profit. That makes sense if economic profit is what you think life is all about.

For those who do agree that exploration is important, the second point (clear goals) is no less essential. Steve Squyres, the Mars Exploration Rover principal investigator, was one of those who spoke to this subject: "We had a set of level-one requirements. They were negotiated with NASA Headquarters. They fit on a single piece of paper – two sides. They stated succinctly and clearly what the MER mission was expected to do. … We would not have made it had we not all had a clear, unambiguous, common understanding of what it was we were trying to accomplish. Those level-one requirements were our guide star." Squyres spoke of the many risks the Mars Rover program had to overcome, including those involving costs, technology, environment, operations and schedule. Overcome they were: Spirit and Opportunity are still roving the Martian surface well past their projected lifetimes.

T. K. Mattingly, a veteran astronaut who flew Apollo 16 and two Shuttle flights, put it this way: "Number one, you have to have a clear, quantifiable, simple-to-understand objective. Step one. If you don’t fill that square in, don’t worry about the rest of them, because they don’t matter." These are lessons not only for the current and future space program, but for a wide range of endeavors. Apollo 17 veteran Harrison "Jack" Schmitt added that for long-term programs such as the Moon-Mars program now being embarked upon, motivating objectives no more than 10 years apart are necessary.

And finally to the third point: risk. Numerous participants pointed to the risks of everyday life. Some of the explorers of earth, sea and space pointed out that the most dangerous thing they ever do is get in a car and go at a moderate rate of speed facing oncoming traffic separated only by a painted line. Why, some wondered, do we accept thousands of deaths on the roads annually, and then call for an end to the human space program when several dozen astronauts die over a period of 40 years?

Some participants worried that we are becoming too risk-averse: NASA as an institution and the United States as a society. Apollo 13 astronaut Jim Lovell recalled the race to the Moon. While the Soviets hesitated, and less than two years after the fatal fire in which three astronauts were killed in their Apollo capsule while still on the ground, in 1968 the bold decision was made to send Apollo 8 around the Moon for the first time. "So here was a case where we analyzed the risk and we thought that the reward – the achievement and the ability to continue the Apollo program for landing – was well worth it." Seven months later we landed on the Moon. Was that risk any less than the risks we take today with the Space Shuttle, or contemplate on the way to Mars?

Putting it bluntly, writer-director and undersea explorer James Cameron, who made 12 submersible dives to the Titanic in preparation for his feature film, stated startlingly that "safety is not the most important thing. I know this sounds like heresy, but it is a truth that must be embraced in order to do exploration. The most important thing is to actually go. "Elaborating on Gene Kranz's lessons in his book Failure is Not an Option, Cameron concluded -- you have to balance the ying and yang of caution and boldness, risk aversion and risk taking, fear and fearlessness. No great accomplishment takes place, whether it be a movie or a deep ocean expedition or a space mission, without a kind of dynamic equipoise between the two. Luck is not a factor. Hope is not a strategy. Fear is not an option."

We must do everything we can to mitigate risk in human spaceflight. We must do everything we can to fix problems that have resulted in disaster. Sometimes there are shortcomings at NASA and its contractors. But the American people need to know that space exploration will never be risk-free. Astronauts, men and women alike, are willing to take those risks. In the end, the important thing is to go. In the end, it is what great nations do.

Bernstein, Peter L. Against the Gods: The Remarkable Story of Risk (Wiley, 1998)

Kurson, Robert, Shadow Divers: The True Adventure of Two Americans Who Risked Everything to Solve One of the Last Mysteries of World War (Random House, 2004).