Grow Text SizeShrink Text Size
Our Place in the Universe

Editor's Note: This is the 13th in a series of essays on exploration by NASA's Chief Historian, Steven J. Dick.

In one of his Four Quartets titled "Little Gidding," T. S. Eliot wrote

We shall not cease from exploration
And the end of all our exploring
Will be to arrive where we started
And know the place for the first time.

Eliot did not have space exploration in mind (the lines were written in 1942), but the sentiment poetically captures one of the most important reasons we explore space. NASA's exploration of the universe, and that of other nations, reveals humanity's place in nature in the broadest possible sense. That view of ourselves has changed dramatically over the last century. One hundred years ago most astronomers considered the universe to be about 3600 light years in extent, less than a billion years old, and with our solar system near its center. Astronomers today have seen objects 13 billion light years away in a universe 13.7 billion years old containing hundreds of billions of galaxies. We are peripherally located in one of those galaxies, known as the Milky Way. 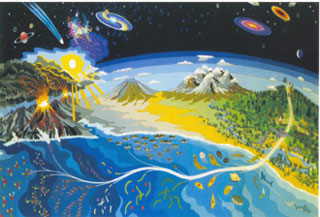 Cosmic evolution is depicted in this image from the exobiology program at NASA Ames Research Center, 1986. Cosmic evolution begins (upper left) with the formation of stars and planetary systems, proceeds (bottom) to primitive and complex life, and culminates with intelligence, technology and astronomers (upper right) contemplating the universe.

Nothing, however, has been more revolutionary than the idea that this entire universe is in a state of constant change, as planets, stars and galaxies are born and die. This story of the life of the universe, and our place in it, is known as cosmic evolution. Although the idea has roots in the 19th century, and was occasionally invoked in the first half of the 20th century by astronomers such as George Ellery Hale, it really came into its own only in the Space Age.

Already in 1958, in his classic book Of Stars and Men, Harvard College Observatory Director Harlow Shapley wrote that the Earth is "on the outer fringe of one galaxy in a universe of millions of galaxies. Man becomes peripheral among the billions of stars in his own Milky Way; and according to the revelations of paleontology and geochemistry he is also exposed as a recent, and perhaps an ephemeral manifestation in the unrolling of cosmic time."

In his 1967 essays Beyond the Observatory, Shapley wrote that "Nothing seems to be more important philosophically than the revelation that the evolutionary drive, which has in recent years swept over the whole field of biology, also includes in its sweep the evolution of galaxies and stars, and comets and atoms, and indeed all things material."

Cosmic evolution has become the guiding principle for modern astronomy. The science programs of the world's space agencies may be seen as filling in the details in this story of the life of the universe. Indeed, the very idea was spread during the 1970s and 1980s by NASA's Search for Extraterrestrial Intelligence (SETI) program, and NASA's broader astrobiology efforts, discussed in the last essay, constitute its biological component.

Especially for the last decade, NASA's Origins program has had cosmic evolution as its overarching epic story. When the program began in 1996, it was viewed as "Following the 15 billion year long chain of events from the birth of the universe at the Big Bang, through the formation of chemical elements, galaxies, stars, and planets, through the mixing of chemicals and energy that cradles life on Earth, to the earliest self-replicating organisms – and the profusion of life."

The array of Great Observatories (Hubble, Compton, Chandra and Spitzer), along with many other spacecraft, have provided an ever more robust view of cosmic evolution and the place of our pale blue dot and its inhabitants. There are also theoretical underpinnings to the idea. In his book Cosmic Evolution: The Rise of Complexity in Nature, Eric Chaisson describes the concept from the all-encompassing point of view of thermodynamics and the flow of energy.

Cosmic evolution has several possible outcomes. Its endpoint may be planets, stars and galaxies. We observe these and know they exist, and the result is what we might call the "physical universe," magnificent in and of itself. Alternately, cosmic evolution may result in a profusion of life, either microbial or intelligent, throughout the universe. This outcome, the Holy Grail of SETI and astrobiology programs around the world, would constitute a "biological universe." A third possible outcome, rarely discussed, is a universe in which cultural evolution is taken into account.

If, as is often assumed, intelligent life is millions or billions of years old, cultural evolution may have resulted in a "postbiological universe," in which flesh and blood intelligence has been superseded by artificial intelligence. Carnegie Mellon AI pioneer Hans Moravec has famously postulated a postbiological Earth in the next few generations. Given the time scales of the universe, its seems much more likely to have already happened in outer space.

All of these outcomes have implications for human destiny. It may be our destiny to populate the universe, or to interact with its flesh-and-blood intelligence in many forms. Or, in the postbiological universe, we may have to interact with machine intelligence. But there are more immediate implications. Sir Arthur Peacocke, a British biochemist and Anglican priest, has called cosmic evolution "Genesis for the Third Millennium," and suggested that it must be incorporated into religious doctrines. Reverend Michael Dowd has taken that sentiment to heart in a DVD called "Evolutionary Christianity," in which he incorporates "the entire history of the universe and the emergent complexity of matter, life, consciousness, culture and technology," in short, the epic of cosmic evolution.

In both space and time the study of cosmic evolution allows us to see the universe as it really is, to reflect on our place in it, and to "know the place for the first time." Space programs may often seem bogged down in technical details, politics and funding controversies. But we should not lose sight of the longer term implications. Although its practical benefits are many, space exploration has no higher calling than this search for our place in the universe.

Steven J. Dick, "Extraterrestrial Life and our Worldview at the Turn of the Millennium," Dibner Library Lecture, Smithsonian Institution Libraries, May 2, 2000.

Arthur Peacocke, "The Challenge and Stimulus of the Epic of Evolution to Theology," in Steven J. Dick, Many Worlds: The New Universe, Extraterrestrial Life and the Theological Implications (Templeton Foundation Press: Philadelphia and London, 2000), pp. 89-117.

Harlow Shapley, Of Stars and Men: The Human Response to an Expanding Universe (Beacon Press: Boston, 1958).