Editor's Note: This is the tenth in a series of essays on exploration by NASA's Chief Historian, Steven J. Dick.

One of the benefits of space exploration is international cooperation. Although the Age of Space began in a fiercely competitive mode, political and funding realities have now shifted the balance toward cooperation. This is particularly true in the case of the International Space Station, with its 16 partner nations. And it promises to be increasingly true with the Vision for Space Exploration.

The reality of international cooperation was brought home to me at a recent "International Workshop on Exploration Science," sponsored by NASA and held at College Park Maryland, March 8-10, 2005. The fourth in a series of international meetings over the last year, this one was attended by the space agencies of 21 countries, 13 multinational organizations, and seven U. S. government organizations. It is not so widely known, but true, that international cooperation goes beyond the Space Station itself. Participants pointed out that, for example, fully half of the last 60 space science missions have had international participation. And in the last ten years NASA has carried out more than 900 agreements with 68 countries. 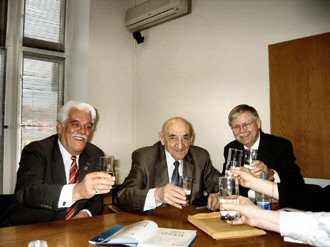 Those gathered at the Maryland meeting were all intensely interested in becoming more involved in cooperation in exploration of the Moon, Mars and beyond. The purpose of the meeting was to hold detailed discussions on how to enhance this cooperation. Such cooperation is never easy, as there are competing interests and a variety of technological and funding capabilities to be weighed. But one can argue that the very act of negotiation, not to mention the implementation of the subsequent agreements, enhances international prospects for peace as projects of great moment for humanity are carried out despite the difficulties.

Another recent experience brought home to me the fact that space history can also enhance international understanding. I write this essay having just returned from Moscow, and impressed by a new role that space history can play. The occasion for the trip was the publication in the NASA History series of the English translation of volume 1 of Boris Chertok's Rockets and People. Chertok participated for six decades in the Soviet and Russian aviation and space programs, including many years as the Deputy to the founding figure of the Soviet space program, Chief Designer Sergey Korolev.

At a ceremony at NASA Headquarters March 14, series editor Asif Siddiqi spoke about the project, as well as Bill Readdy, Associate Administrator for the Space Operations Mission Directorate, and Jesco von Puttkamer, space station senior engineer who was essential in initiating and sustaining the project.

But one person not present on March 14 was Chertok, who had just turned 93 and was still alive and well in Moscow. So March 30 found us in Moscow at an even more memorable event with Chertok himself present. Among the 100 attendees were top management from Roskosmos (the Russian Federal Space Agency) and RSC Energia (the Russian equivalent of Lockheed or Boeing), many veteran cosmonauts (including, Alexandrov, Popovich, Savynikh, and Baturin), and distinguished guests including Natalia Koroleva, Chair of Surgery at the Moscow Medical Academy, and daughter of Sergey Korolev.

Among the speakers at the dedication ceremony was the U. S. Ambassador to Russia, Alexander Vershbow, who pointed to the publication of Chertok's book in the United States as "more evidence of the growing interest in Russia’s history and enormous expertise in space exploration." After recalling the history of Soviet/Russian and U. S. cooperation in space, Ambassador Verhsbow noted that "this longstanding cooperation is based on mutual respect and admiration for the capabilities brought to the table by the other side. In this way, we believe that we have forged a true partnership. This has been most recently demonstrated since the Space Shuttle Columbia accident. While the Shuttle fleet has been grounded for the last two years, Russia has been providing the International Space Station with crews and cargo, keeping the station human-tended and productive. We all look forward to the Shuttle’s safe return to flight in May of this year."

The Ambassador also noted that "the Vision for U.S. Space Exploration announced by President Bush over a year ago sets many challenging tasks for NASA. One of the objectives of this initiative is to promote international cooperation in the exploration of the moon, Mars and beyond." This was precisely the goal of the Maryland meeting a few weeks before.

Chertok himself gave a lively address, expressing his surprise and delight that the Americans were taking such a renewed interest in Soviet/Russian space history, and called this revelation a "second discovery of America."

The Chertok event and the attending remarks point to an important role for the NASA History Division, and one that fits well into its parent organization, the Office of External Relations, which includes international relations. By helping to increase understanding of the past, history can foster good international relations in the present and the future. The three additional volumes of Chertok’s memoirs that will appear over the next three years will continue to foster good relations. And a variety of other history projects are possible with Russia and other nations.

My Moscow visit also provided an opportunity to visit the legendary Star City, home of the Gagarin Cosmonaut Training Center, where I sat in a Soyuz simulator, toured the neutral buoyancy facility, and viewed many historic facilities and artifacts. A visit to the Russian Mission Control allowed us to see where the Mir space station had been tracked, and where now the International Space Station is tracked jointly with Mission Control at Johnson Space Center. Russian Mission Control is located in a suburb of Moscow, formerly named Kaliningrad, now appropriately renamed Korolev. Nearby stand the buildings of the Rocket Space Corporation Energia, production facilities that also house an excellent museum, including Gagarin's charred capsule. 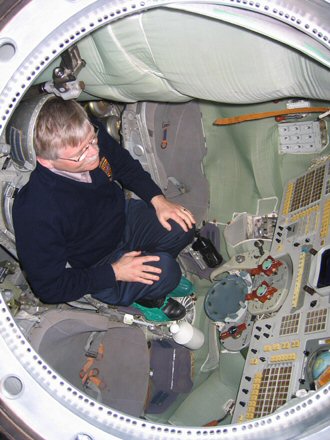 A week later, at the Johnson Space Center in Houston, I visited the American Mission Control for the International Space Station, festooned with the flags of the 16 cooperating nations. Despite the critics, one can argue that Space Station funding has been well-spent simply as an investment in fostering international cooperation, and for what such cooperation promises to achieve in the future.