Editor's Note: This is the ninth in a series of essays on exploration by NASA's Chief Historian, Steven J. Dick.

As controversies swirl about funding, resources, motives and methods for spaceflight, it is well to consider the consequences of exploring space – and of choosing not to do so. Earlier essays have already analyzed in broad terms some of the potential consequences of not exploring, especially the lack of creativity that an inward-looking society may bring, by analogy with Ming China. Others have pointed out that the Age of Discovery was only a mixed blessing, especially when it came to culture contact.

The consequences of space exploration as already undertaken stand before us for examination. They occur on many levels: commercial applications, education and inspiration to youth, applications satellites, scientific benefits, and philosophical implications. All are open to analysis, and as we approach the fiftieth anniversary of the Age of Space, we should examine, with historical objectivity, precisely what the impact of the Age of Space has been. 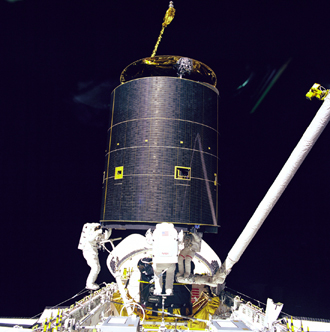 One feature unlikely to be paralleled with the Age of Discovery, at least in the near future, is contact with other cultures. Shipboard observers often carefully noted exotic plants and animals seen during the course of their voyages, and the ultimate experience was contact with exotic humans.

In the Age of Space, the search for microbial life has been a main driver of space exploration, in particular with regard to Mars, but also now extended to more exotic environments like the Jovian moon Europa. With that search for life on new worlds, planetary protection protocols have been put in place, both for our own planet and others.

Contact with intelligent extraterrestrials beyond the solar system will remain a more remote possibility, and when and if it happens we should learn from the history of culture contacts on Earth.

But the immediate impact of the Space Age is far more diverse than the ultimate discovery of life in space. In her new book Rocket Dreams: How the Space Age Shaped Our Vision of a World Beyond, Marina Benjamin argues that space exploration has shaped our worldviews in more ways than one. "The impact of seeing the Earth from space focused our energies on the home planet in unprecedented ways, dramatically affecting our relationship to the natural world and our appreciation of the greater community of mankind, and prompting a revolution in our understanding of the Earth as a living system," she wrote.

Benjamin thinks it is no coincidence that the first Earth Day on April 20, 1970, occurred in the midst of the Apollo program; or that one of the astronauts developed a new school of spiritualism; or that people "should be drawn to an innovative model for the domestic economy sprung free from the American space program by NASA administrator James Webb." Exploration shapes world views and changes cultures in unexpected ways, and so does lack of exploration.

Space has had more tangible impacts on society. To take only one, imagine where we would be without applications satellites. We now take for granted photographs of weather and Earth resources data from space, as well as navigation and worldwide communications made possible by satellite.

Along with human and robotic missions, the late twentieth century will be remembered collectively as the time when humans not only saw the Earth as a fragile planet against the backdrop of space, but also utilized near-Earth space to study the planet's resources, to provide essential information about weather, and to provide means for navigation that was both life-saving and had enormous economic implications. Worldwide satellite communications brought the world closer together, a factor difficult to estimate from a cost-benefit analysis. Names like Landsat, GOES (Geostationary Operational Environmental Satellites), Intelsat and Global Positioning System may not be household words, but they affect humanity in significant ways not always appreciated.

Important as they are, applications satellites pale in significance to what space may represent for the future of humanity. While some argue that robotic spacecraft are cheaper and less risky than human spaceflight, it is my belief that humans will nevertheless follow robotic reconnaissance as night follows day.

Humans will not be content with a Space Odyssey carried out by robotic surrogates, any more than the other great voyages of human history. Robots extend the human senses, but will not replace the human mind in the foreseeable future, even with advances in artificial intelligence. HAL in Arthur C. Clarke's famous novel and movie was not as smart as he thought, and will not be for a long time. As President Bush said in announcing his new initiative in January 2004, humans will spread through the solar system, fulfilling the vision of what British philosopher Olaf Stapledon 55 years ago called "interplanetary man."

Eventually humans will spread into the cosmos at large. One cannot set a timeline, but by 3001 "interstellar humanity" will likely follow. We do not know what surprises and challenges we will find. But they will be there and humans will revel in them. That is the nature of humans with their inbuilt curiosity and penchant for exploration, one might say the very definition of what it is to be human.

Historians and social scientists have analyzed this kind of argument, and not all agree that the utopian ideal of spreading humanity to outer space is a valid reason for going, or that utopia is what we will build when we get there. In a democratic society such arguments must be fully voiced. Others have demonstrated the complex relation of such space goals to social, racial and political themes. One such study is De Witt Kilgore's recent book Astrofuturism: Science, Race and Visions of Utopia in Space. In this book Kilgore examines the work of Wernher von Braun, Willy Ley, Robert Heinlein, Arthur C. Clarke, Gentry Lee, Gerard O'Neill and Ben Bova, among others in what he calls the tradition of American astrofuturism.

Such studies remind us that, like it or not, the idea of space exploration has been woven into the fabric of society over the last 50 years, even as exploration has raised our cosmic consciousness. The historical analysis of that transformation, in ways large and small, should help us make informed choices about our future in space.

Marina Benjamin, Rocket Dreams: How the Space Age Shaped our Vision of a World Beyond (Free Press: New York, 2003).