Grow Text SizeShrink Text Size
This Month in Exploration - September
From the early days of experimental airplanes to NASA’s soaring space shuttles, the evolution of flight has mirrored the evolution of society. The ongoing scientific discoveries that are part of aeronautics and space flight have improved life on Earth and allowed humans to begin investigating the secrets of the universe. “This Month in Exploration” presents the rich history of human flight, contextualizing where we’ve been and examining the exploration history NASA is making today. 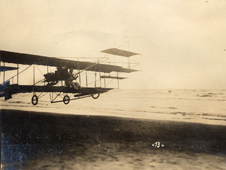 Glenn Curtiss and his biplane at Cedar Point in Sandusky, Ohio. Credit: the Charles E. Frohman Collection at the Rutherford B. Hayes Center 100 Years Ago

September 1, 1910: Glenn H. Curtiss made a return flight from Cedar Point in Sandusky, Ohio to Euclid Beach in Cleveland in an hour and forty-two minutes. While he did not break his August record for the longest flight over water, he did average around fifty-five miles per hour in his biplane, securing the record for the reverse course. He beat a brace of homing pigeons released just before he left Cedar Point.

September 3, 1925: The U.S. Navy dirigible Shenandoah, the United States’ first rigid airship and the first major airship to be filled with helium, crashed near Ava, Ohio, killing 14 of the 43 people aboard. Small pieces of the wrecked airship were salvaged at the Ohio site by curiosity seekers. The Shenandoah took its name from an Indian word meaning “Daughter of the Stars,” and was the first airship to use non-inflammable helium instead of flammable hydrogen.

September 20, 1945: The British Gloster Meteor made its historic first flight with Rolls Royce Trent-engines that had five-bladed propellers. The plane was not only the first operational British jet fighter, and the only Allied jet fighter to see combat in World War II, but it also pioneered turboprop power. 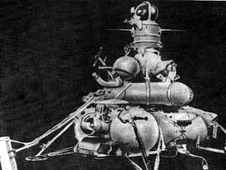 September 8, 1960: The Office of Naval Research announced that radio signals had been received from the planet Saturn and a star 3,000 light-years away by the University of Michigan's 85-foot radio telescope. At the time of its construction in 1958, it was one of the largest radio telescopes in the world. Later advances in radio telescopes and NASA space missions helped to clarify the natural sources of these signals.

September 19, 1960: NASA successfully launched its Nuclear Emulsion Recovery Vehicle (NERV) experiment from Point Arguello, Calif., via an Argo D-8 rocket. The first NASA launch at the Pacific Missile Range, the NERV instrumented capsule reached an altitude of 1,260 miles before landing 1,300 miles downrange where it was picked up by U.S. Navy ships. It was the first manmade object to travel to such an altitude in space and be recovered upon its return to Earth.

September 12, 1970: The former Soviet Union launched the Luna 16 robotic probe via a Proton K rocket from Baikonur, USSR. Luna 16 soft-landed on the moon on September 20, performed the first automated lunar sample retrieval, and returned to Earth on September 24.

September 26, 1975: NASA launched the Intelsat 4A F-1 satellite via an Atlas rocket from NASA’s Kennedy Space Center, Fla. This improved satellite had double the capacity of previous Intelsat satellites. 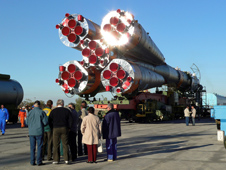 Review of Russian Soyuz TMA-7 spacecraft as it is rolled out to its launch pad at the Baikonur Cosmodrome in Kazakhstan. Credit: NASA 30 Years Ago

September 9, 1980: NASA launched the GOES-4 weather satellite via a Delta rocket from NASA’s Kennedy Space Center, Fla. GOES-4 was the first geostationary satellite to provide a continuous look at temperature and moisture conditions in the vertical layers of Earth’s atmosphere.

September 11, 1985: NASA’s International Cometary Explorer (ICE), formerly ISEE 3, made its programmed flyby of Comet Giacobini-Zinner. ICE was the first spacecraft to directly investigate a comet, and after an encounter with Halley’s comet, became the first to investigate two comets.

September 7, 1995: NASA launched space shuttle Endeavour (STS-69) from NASA’s Kennedy Space Center, Fla. Mission highlights include the first deployment and retrieval of two satellites on the same mission, the SPARTAN 201 and Wake Shield Facility (WSF) satellite. The SPARTAN 201 was a free-flying satellite designed to investigate the solar wind that constantly flows past Earth. It was the second flight of the WSF, a commercial satellite designed to manufacture extremely pure materials in low earth orbit.

September 8-20, 2000: NASA launched space shuttle Atlantis (STS-106) from NASA’s Kennedy Space Center, Fla. The Atlantis astronauts prepared the International Space Station for arrival of the first permanent crew by delivering supplies (more than 6,000 pounds of material) and installing batteries, a toilet, power converters and a treadmill. During a space walk the crew connected power, data and communications cables to the Zvezda Service Module.

September 30, 2005: Russia launched the Soyuz-TMA 7 via a Soyuz-FG rocket from the Baikonur Cosmodrome in Kazakhstan. The spacecraft carried a NASA astronaut, a Russian cosmonaut and an American tourist to the International Space Station.

September 8, 2010: President Dwight D. Eisenhower formally dedicated NASA’s Marshall Space Flight Center in Huntsville, Ala. on this date 50 years ago. The center was named in honor of Gen. George C. Marshall, the U.S. Army chief of staff during World War II, a U.S. secretary of state and a Nobel Prize winner.