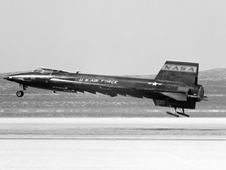 September 6, 1809: Sir George Cayley completed a detailed essay about his theories and research regarding heavier-than-air flight entitled "On Aerial Navigation." Sir Cayley, sometimes called the Father of Aviation, was the first to identify the four aerodynamic forces of flight weight, lift, drag, and thrust, and their relationship. He was the first investigator to apply the research methods and tools of science and engineering to the solution of the problems of flight. He also described many of the concepts and elements of the modern airplane, and was the first to build a successful human-carrying glider.

September 7, 1909: The U.S. Army established its first aerodrome in College Park, Maryland. An aerodrome is a location from which aircraft flight operations take place, whether on land or at sea.

September 9, 1934: The American Rocket Society (ARS) launched Rocket No. 4 to 400 feet altitude at Marine Island, Staten Island, N.Y. These early rocket experiments were designed not only to explore the technical issues involved with launching a rocket into space, but also to promote public and scientific interest.

September 15, 1934: The Aeromedical Laboratory, the primary location of physiological research on the effects of high altitude flight during WWII, was founded at Wright Field, Dayton, Ohio. 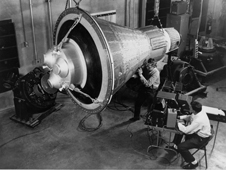 September 17, 1959:The first powered X-15 flight with A. Scott Crossfield at the controls occurred in Edwards, CA. The X-15 demonstrated the first application of hypersonic theory and wind tunnel work to an actual flight vehicle, and examined pilot performance and physiology within and outside the Earth's atmosphere.

September 9, 1959: The Atlas 10-D, also known as Big Joe 1, was launched from Cape Canaveral. The mission was to test the Mercury capsule boilerplate heat shield. Built in two segments, the main body was fabricated with thin sheets of corrugated Inconel alloy.

September 5, 1964: The first of six Orbiting Geophysical Observatory (OGO) satellites was launched from Cape Kennedy at 9:23 p.m., EDT. The purpose of the satellites was to study Earth’s atmosphere, magnetosphere, and the space between Earth and the moon. Data was received from 20 experiments.

September 1, 1974: The interplanetary scientific probe Pioneer 11 approached the planet Jupiter, sending back the first polar images of the planet. This mission gathered data on Jupiter’s magnetic field, measured distributions of high-energy electrons and protons in the radiation belts, measured planetary geophysical characteristics and studied gravity and the atmosphere. It then headed on toward an encounter with Saturn and an eventual departure from the solar system.

September 20, 1979: The High Energy Astronomical Observatory (HEAO) 3 was launched at 1:28 a.m., EDT from the Eastern Space and Missile Center. The spacecraft was designed to detect cosmic ray particles and gamma-ray photons to further the understanding of magnetic fields and interstellar matter.

September 8, 1984: The Navigation System with Timing and Ranging (NavStar) 10 was launched from the Western Space and Missile Center. NavStar, later renamed the Global Positioning System (GPS), was designed to provide all-weather, twenty-four hour navigation capabilities for all U.S. military forces, but has also become an integral part of civilian industrial and recreational applications. It was developed by the U. S. Department of Defense.

September 9-13 1994: The space shuttle Discovery (STS-64) was launched at 6:33 p.m., EDT from Kennedy Space Center. It landed at Edwards Air Force Base, CA ten days later. On September 13, the crew of STS 64 released the Spartan 1 (also known as Spartan 201) platform. The platform was captured back after a few days. Spartan 1 carried optical instruments to measure the speed and acceleration of the solar wind in the corona. 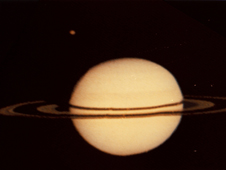 Pioneer 11 Image of Saturn and its moon Titan. Credit: NASA

September 30, 1994: The space shuttle Endeavour (STS-68) launched at 7:16 a.m. EDT from Kennedy Space Center. It carried the Space Radar Laboratory (SRL), part of NASA's Mission to Planet Earth. Unusual events were studied from space, including an erupting volcano in Russia and islands of Japan after an earthquake.