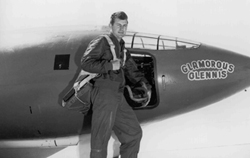 October 26, 1907: In France, aviation pioneer Henri Farman was awarded the Archdeacon Cup for flying a record-setting distance of 2,350 feet.

October 14, 1947: The Bell X-1 became the first aircraft to travel faster than the speed of sound. Piloted by Charles Yeager, the X-1 reached a maximum speed of 700 miles per hour. Yeager named the airplane "Glamorous Glennis" in honor of his wife.

The launch of Sputnik triggered the beginning of the space race between the United States and the Soviet Union. Sputnik led Americans to fear the Soviet Union’s potential power to launch ballistic missiles. In response, Congress passed the Space Act in July 1958, which resulted in the creation of NASA.

October 22, 1977: NASA launched two of three International Sun-Earth Explorer (ISEE) satellites, which were developed through a partnership between NASA and the European Space Agency. NASA launched ISEE 1 and 2 from Cape Canaveral, Fla., via a Delta 2000 rocket. Researchers used them to study and explore Earth's magnetosphere with instruments that measured energetic particles, plasma, waves and fields. The third satellite, ISEE-3, was launched into a different orbit on August 12, 1978. 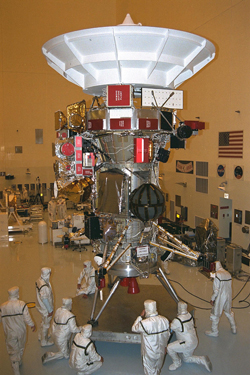 October 15, 1997: NASA launched Cassini, beginning the spacecraft's long journey to Saturn. Cassini reached Saturn’s orbit in July 2004 and has been used to collect data on the planet’s composition, rings, moons and atmosphere. The launch vehicle used was a Titan IVB with a Centaur upper stage.

October 1, 2007: NASA begins celebrating its 50th year. The agency began operations on October 1, 1958 and started to conduct space missions within months of its creation.

October 23, 2007: NASA launched the space shuttle Discovery on the STS-120 mission to the International Space Station. This is the first time in NASA history that two women, shuttle Commander Pamela Melroy and space station Commander Peggy Whitson, will be commanding two spacecraft at the same time. The shuttle will deliver the new Harmony module, made by Alcatel-Alenia Space in Italy. Harmony is a pressurized passageway that will connect the U.S. segment of the ISS to the European and Japanese modules.