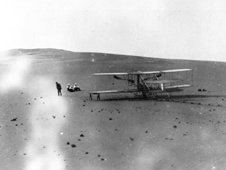 May 14, 1908: Wilbur Wright flew with the first airplane passenger, Charles Furnas, in North Carolina. Furnas was the Wright brothers' mechanic. He is also a distant cousin of Randall Furnas, the director of NASA Glenn's Office of Strategic Management.

May 14, 1933: The American Interplanetary Society successfully launched its Rocket No. 2 in Staten Island, N.Y. The rocket achieved a 250-foot altitude in only two seconds.

May 13, 1948: General Electric fired the first two-stage Bumper-WAC rocket at White Sands Proving Ground in New Mexico. This was the first large, two-stage rocket launched in the Western Hemisphere. The rocket reached a 78-mile altitude during flight.

May 29, 1953: Edmund Hillary and Tenzing Norgay became the first to reach the top of Mt. Everest. As part of the British Everest Expedition, Hillary and Norgay took about seven weeks to reach the summit.

May 15, 1958: The Soviet Union launched Sputnik 3 from the Baikonur launch facility using an R-7 rocket. Sputnik 3 was a 1.3 metric ton space-science satellite used to measure the pressure and composition of Earth's upper atmosphere. 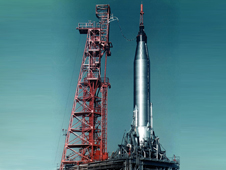 Mercury-Atlas 9 prior to liftoff. Credit: NASA 45 Years Ago

May 15, 1963: NASA launched its Faith 7 capsule on the Mercury-Atlas 9 mission from Cape Canaveral, Fla. The Faith 7 capsule carried astronaut Leroy Gordon Cooper and orbited Earth 22 times. This mission was the first U.S. flight to exceed 24 hours and the last Mercury mission.

May 14, 1973: NASA launched Skylab, the first U.S. space station, using a Saturn V rocket. As part of the Apollo program, Skylab contained experiments for studying Earth, the sun, and the effects of microgravity on the human body. Three crews visited the space station -- proving that humans can live and work in space for long periods of time -- before it was shut down in February 1974.

May 20, 1978: NASA launched the Pioneer Venus Orbiter → aboard an Atlas-Centaur rocket. It reached Venus' orbit on December 4 and used 12 instruments to study the planet's atmosphere. Though it was only intended to study Venus for a year, most of the orbiter's instruments were still functioning until it ran out of fuel and entered Venus' atmosphere in 1992.

May 19, 1983: NASA launched Intelsat V F-6 using an Atlas-Centaur rocket. This satellite helped increase the capability of telecommunications for Intelsat's global network and included a maritime ship-to-shore communication system. This was the 100th launch managed by engineers at NASA's Glenn Research Center (then NASA Lewis).

May 13, 1988: Russia launched Progress 36, an unmanned re-supply vehicle that docked with Russia's Mir space station on May 15.

May 25, 1993: At the end of its fourth orbital cycle, NASA's Magellan became the first orbiting planetary spacecraft to use aerobraking to change its orbit. During this 70-day maneuver, the elliptical orbit parameters were changed so atmospheric drag would slow the spacecraft and make its orbit around Venus more circular. Aerobraking thus saved precious maneuvering fuel for Magellan.

May 28, 1998: Astronomer Susan Terebey reported that a possible planet, named TMR-1C, was found outside of our solar system in an image captured the previous year by the Hubble Space Telescope. Later studies revealed that the planet was actually a star. 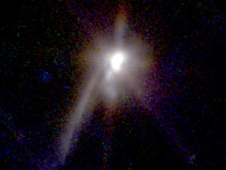 May 9, 2003: The Japan Aerospace Exploration Agency launched MUSES-C → from Kogoshima Space Center to collect a surface sample of the near-Earth asteroid Itokawa and return it to Earth. The craft was later renamed Hayabusa, which means "falcon."

May 21, 2008: Just 24 hours before reaching the top of Mt. Everest, NASA astronaut Scott Parazynski had to turn back due to severe lower back pain. He posted these words on his blog on May 22: "After 59 days on this expedition, and a lifetime of dreaming about it, it was a painful but easy decision to turn away from the summit … There's no need to feel sorry for me, though, as I've had the adventure of a lifetime here …Thanks so much for following along with my Everest expedition." For pictures and more information, visit NASA's Everest Expedition web page.

May 25, 2008: NASA's Phoenix Mars Lander touched down on the Martian surface to begin a sixth-month mission investigating the history of water on the planet. The lander is equipped to explore the ice-rich soil of the arctic region of Mars to determine its potential for long-term habitability. Phoenix was launched in August 2007 as part of NASA's Scout Program.

May 31, 2008: NASA will launch Space Shuttle Discovery to begin the 123rd shuttle flight. During STS-124, the crew will deliver the Pressurized Module and the robotic arm of the Japanese Experiment Module "Kibo" to the International Space Station.