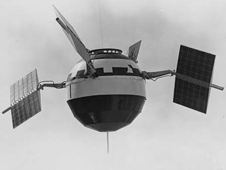 The Pioneer V spacecraft. This model was used in a parade in Cleveland, Ohio. Credit: NASA 100 Years Ago

March 28, 1910: The first powered seaplane, Le Canard ("The Duck"), flew at La Mède harbor in Martigues, France. The plane, invented by Henri Fabre, flew for a distance of about 1600 feet and a maximum height of 7 feet over the water. The seaplane resembled a giant dragonfly flying backward.

March 3, 1915: A rider to the U.S. Naval Appropriations Act established the Advisory Committee for Aeronautics (later the National Advisory Committee for Aeronautics or NACA). Its purpose was to manage flight research with a focus on practical solutions to known problems. NACA provided the nation's earliest aeronautics research, helped develop important flight technologies and increased knowledge of flight safety and efficiency. 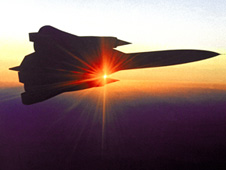 The YF-12 aircraft flying at sunset. Credit: NASA 75 Years Ago

March 28, 1935: Robert Goddard launched the first rocket equipped with gyroscopic controls near Roswell, N.M. The rocket attained a height of 4,800 feet, a horizontal distance of 13,000 feet and a speed of 550 mph.

March 8, 1945: The U.S. Navy launched a rocket-powered Gorgon air-to-air missile from a PBY-5A patrol bomber aircraft off Cape May, N.J. It was the first powered missile test flight. During the flight it achieved an estimated speed of 550 m.p.h.

March 3, 1950: The University of Illinois held a symposium on space medicine at its Professional Colleges in Chicago. This symposium, along with additional meetings, contributed to the realization of the medical community that an understanding of other scientific disciplines was needed in order to meet the complex medical requirements of manned flight and manned space flight. February 9, 1950: The U.S. Navy successfully launched a Martin Viking No. 3 rocket from White Sands Proving Grounds to an altitude

March 23, 1965: NASA launched Gemini III (the first operational mission of the Gemini series) via a Titan-II rocket. The primary objectives of the mission were to demonstrate manned orbital flight, evaluate the two-man design and test and evaluate the craft’s systems and procedures. Former Mercury astronaut Gus Grissom commanded the mission, with John W. Young, a Naval aviator chosen as an astronaut in 1962, accompanying him.

March 5, 1970: NASA flew the first of two YF-12A Blackbirds in a joint program with the U.S. Air Force to explore high-speed, high-altitude flight. The program produced a wealth of information that is still useful today for designing future vehicles that could fly at three times the speed of sound or faster.

March 7, 1980: Research pilot John Manke made several test flights in the Gossamer Albatross, a manually operated aircraft propelled by pedals. The tests were part of a NASA project to collect data on large, lightweight aircraft. Manke reached an altitude of 20 feet and reported that the Albatross was like nothing he had ever flown before. 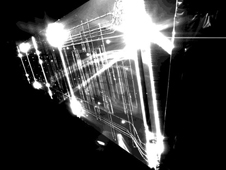 An image of a solar panel of Rosetta taken by the spacecraft itself during testing. Credit: NASA 15 Years Ago

March 2, 1995: NASA launched the space shuttle Endeavor (STS-67) from NASA’s Kennedy Space Center, Fla. The shuttle carried Astro-2, the second astronomy payload for Spacelab, and various experiments. STS-67 was the longest shuttle flight up to that point and it facilitated sustained examination of the "hidden universe" of ultraviolet light.

March 4, 2005: The Rosetta spacecraft completed the first of three Earth gravity assists on its way to rendezvous with comet 67P (Churyumov-Gerasimenko)—it used Earth’s gravity to increase its momentum in its journey. Rosetta is a joint mission between NASA and the European Space Agency. It is designed to eventually land on and investigate the comet while providing insight into the origins of the solar system. The gravity assists, three with Earth and one Mars, are required for the spacecraft to gain enough orbital energy to reach the comet in 2014.

March 1, 2010: NASA will launch its GOES-P geostationary satellite via a United Launch Alliance Delta IV rocket from Cape Canaveral Air Force Station. GOES-P is the latest in a series of meteorological satellites designed to monitor storm development and weather conditions on Earth.

March 18, 2010: NASA is scheduled to launch space shuttle Discovery on mission STS-131 from NASA’s Kennedy Space Center, Fla. The shuttle will carry a Multi-Purpose Logistics Module filled with science racks that will be transferred to laboratories of the International Space Station. STS-131 is the 33rd shuttle mission to the station.