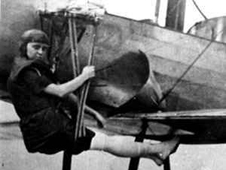 June 21, 1913: Georgia "Tiny" Broadwick made parachuting history at age 20 by becoming the first woman to jump from an airplane. Her nickname was "Tiny" because she was only four feet tall and weighed a mere 85 pounds. She completed more than 1,100 jumps throughout her lifetime.

June 11, 1928: Friederich Stamer made the first manned flight of a rocket-powered aircraft from the Rhön Mountains in Germany. Stamer's rocket-mounted, tailless glider was designed by Alexander Lippisch, and it flew about one mile.

June 17-18, 1928: Amelia Earhart became the first woman to fly across the Atlantic. She flew aboard a Fokker tri-motor aircraft that was piloted by Wilmer Stultz and Louis Gordon.

June 22, 1933: Russia's prototype Tupolev ANT-25 monoplane made its first flight. This single-engine aircraft was piloted by M.M. Gromov and was used to set many world records in aviation.

June 4, 1958: The U.S. Air Force successfully tested a Thor missile for the first time from a tactical-type launcher. 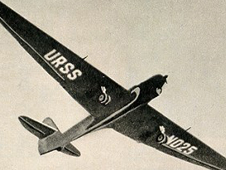 June 16, 1963: Cosmonaut and parachutist Valentina Tereshkova became the first woman in space when she flew aboard Vostok 6. Upon returning from her three-day flight, she was recognized as a Hero of the Soviet Union, the union's highest honor for heroic deeds.

June 26, 1978: NASA launched Seasat from Vandenberg Air Force Base, Calif. using an Atlas-Agena rocket. Seasat was a remote-sensing satellite that carried a unique set of instruments for studying Earth's oceans and weather.

June 13, 1983: NASA's Pioneer 10 satellite became the first man-made object to leave the solar system. It was also the first spacecraft to visit an outer planet and the first to capture close-range images of Jupiter. Its final signal was sent to Earth in January 2003.

June 18-24, 1983: Sally Ride → became the first American woman in space during the shuttle Challenger's STS-7 mission. At age 32, she was also the youngest American astronaut in space.

June 22, 1988: Russia launched a scale model of the Buran orbiter to complete a series of five test flights. These flights led to the first and only unmanned Buran mission in November 1988. 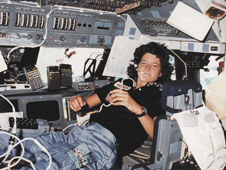 June 2, 1998: NASA launched space shuttle Discovery to begin STS-91, the final Shuttle/Mir docking mission. This nine-day mission was the first to use the super-lightweight external tank, which allowed for an increase in shuttle payload.

June 2, 2003: The European Space Agency launched Mars Express → using a Soyuz-Fregat launch vehicle. The spacecraft consisted of an orbiter and a lander used to search for water or life on Mars. The Mars Express is a collaborative mission involving France, Germany, Great Britain, Ireland, Italy, the Netherlands, Norway, Russia, Sweden, Spain, Japan and the United States. It reached Martian orbit in December 2003.

June 10, 2003: NASA launched a robotic rover named Spirit aboard a Delta II launch vehicle as part of the Mars Exploration Rover → project. Its twin, Opportunity, was launched July 7. Both rovers have retrieved valuable information regarding the chemical and mineralogical composition of Martian soil and rocks as well as numerous high-quality images of the terrain for far longer than expected.

June 15, 2008: NASA launches the Jason-2 satellite to begin the Ocean Surface Topography Mission →. As a follow-on to the Jason mission, Jason-2 is an international project to extend the study of ocean topography.