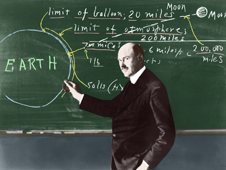 Dr. Robert H. Goddard at a chalkboard at Clark University in 1924. Credit: NASA 100 Years Ago

July 27, 1909: Orville Wright piloted the first official test flight of the U.S. Army's first airplane at Fort Myer, Virg. The flight lasted approximately one hour and 12 minutes. President Taft, his cabinet, and more than 10,000 other spectators witnessed the event.

July 17, 1929: Robert H. Goddard launched a liquid fueled rocket at Auburn, Mass. The rocket was 11-feet long and carried the first scientific payload -- a camera, thermometer and barometer -- all of which were recovered intact. The rocket rose about 90 feet before crashing down just 171 feet away. Despite its failure, the launch garnered quite a bit of publicity.

July 15, 1934: Varney Speed Lines, known today as Continental Airlines, made its first flight. The flight carried mail, but no passengers, on a 530-mile route from Pueblo, Colo., to El Paso, Texas, with stops in Las Vegas, Santa Fe and Albuquerque, N.M. 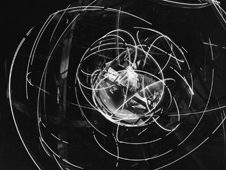 July 1959: Project Mercury astronauts completed disorientation tests on the Multiple Axis Space Test Inertia Facility (MASTIF) at NASA's Lewis Research Center (now NASA Glenn). Also known as the "gimbal rig," this spaceflight simulator was made of three cages that revolved separately or in combination to create roll, pitch and yaw motions at speeds up to 30 revolutions per minute.

July 20, 1969: Neil Armstrong and Edwin "Buzz" Aldrin became the first humans to set foot on the moon during the Apollo 11 mission. As they took these "small steps," Michael Collins orbited the moon in the command module. Millions of people around the world were glued to their television sets as the Apollo 11 crew inspired generations to believe they could do anything if they tried hard enough. Five more Apollo missions landed on the moon between 1969 and 1973.

July 16, 1974: The Aeros 2 satellite was launched at 4:51 a.m. PDT from the Western Space and Missile Center at Vandenberg Air Force Base in California. The spacecraft was designed for the research and exploration of the upper atmosphere, especially solar radiation.

July 9, 1979: NASA's Voyager 2 passed within 404,000 miles of Jupiter, making its closest approach at 6:29 p.m. EDT on July 9. Scientists received a deluge of data, including photographs of the planet and some of its satellites, from more than 570 million miles away. The spacecraft passed Jupiter's moons Callisto and Ganymede on its way toward Europa. And after its encounter with Jupiter, it photographed six volcanoes erupting on Io.

July 18, 1984: Svetlana Savitskaya became the first woman to perform an Extravehicular Activity, or spacewalk, during the Russian Soyuz T-12 mission. 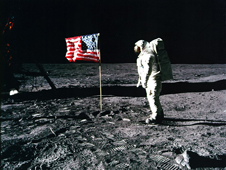 Buzz Aldrin and the U.S. flag on the surface of the moon. Credit: NASA 15 Years Ago

July 1994: Researchers using the Hubble Space Telescope confirmed a critical tenet of the big-bang theory -- the presence of helium in the early universe. According to the theory, reactions between the primordial protons and neutrons formed hydrogen and helium in the first three minutes after the big bang. By showing that significant amounts of helium existed in the early universe, the discovery reaffirms this explanation of the formation of the chemical elements in the universe.

July 23, 1999: NASA launched space shuttle Columbia on its 26th flight, the STS-93 mission. The crew deployed the Advanced X-ray Astrophysics Facility. Now known as Chandra, it is the most sophisticated X-ray observatory ever built. On this mission, Eileen Collins became the first woman to command a space shuttle.

July 11, 2009: Space shuttle Endeavour is scheduled to launch at 7:39 p.m. EDT, beginning the STS-127 mission. The crew will deliver and install the final elements of the Japan Exploration Agency's Kibo laboratory to the International Space Station.