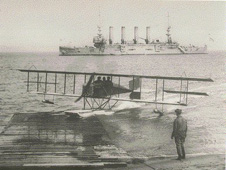 February 15, 1910: King Edward VII granted the title "Royal" to the Aero Club of the United Kingdom. The club, in existence since 1901, is still the coordinating and representational organization for recreational and competitive air sport in the United Kingdom.

February 20, 1915: Allan Loughead (later Lockheed) opened a flying concession at the Panama-Pacific Exhibition in San Francisco. He used the Model G Alco No. 1 that he and his brother built three years earlier. Over the course of 50 days, Lockheed flew 600 passengers across the bay for $10 each. The flight lasted 10 minutes.

February 27, 1920: Maj. Rudolph W. Schroeder of the U.S. Army Air Service set a new world altitude record when he flew a LePere-Liberty 400 to a height of over 33,000 feet at McCook Field in Dayton, Ohio. During the flight he nearly lost his life when his oxygen system failed. 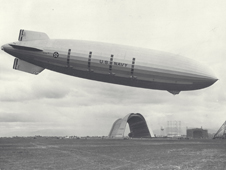 February 22, 1925: Geoffrey de Havilland took off from London in a D.H.60 Moth constructed by the de Havilland Aircraft Company. The two-seat tour and training plane was constructed of wood with fabric covered surfaces and marked the start of a new age of light aviation.

February 18, 1930: Clyde W. Tombaugh discovered Pluto during his tenure at Lowell Observatory in Flagstaff, Ariz. Pluto is 3 billion miles from the sun and takes approximately 250 years to complete a single orbit.

February12, 1935: The U.S. Navy lost the last dirigible from its lighter-than-air aviation program when the USS Macon crashed at sea off the California coast. The 785 foot airship was lost for 55 years, until the Monterey Bay Aquarium Research Institute and the U.S. Navy discovered its underwater gravesite in 1990.

February 20, 1945: The U.S. Secretary of War approved plans for the establishment of the White Sands Proving Ground in New Mexico. Later renamed the White Sands Missile Range, it was the site of pioneering research in rocket technology and the birthplace of the race to space in the late 1950s.

February 9, 1950: The U.S. Navy successfully launched a Martin Viking No. 3 rocket from White Sands Proving Grounds to an altitude of 50 miles, just out of Earth's atmosphere. Just over a week later a V-2 rocket reached an altitude of 92 miles. Both rockets represent significant achievements in rocket development and testing.

February 3, 1965: NASA launched its second Orbiting Solar Observatory (OSO 2) aboard a Delta rocket from Kennedy Space Center, Fla. The OSO satellites were all designed to perform solar physics experiments, mapping the direction and intensity of UV light, X-ray and gamma radiation from the sun.

February 11, 1970: Japan became the fourth space power after it launched the satellite Ohsumi into orbit aboard their Lambda booster rocket from Uchinoura Space Center.

February 6, 1975: NASA launched its second Synchronous Meteorological Satellite (SMS 2) on a Delta rocket from Kennedy Space Center, Fla. The SMS 1 and 2 were the first operational satellites in the National Oceanic and Atmospheric Administration (NOAA) system. They were designed to provide meteorological data that would improve weather forecasting around the world.

February 14, 1980: NASA launched the Solar Maximum Mission (SMM) on a Delta rocket from Kennedy Space Center, Fla. It was the first mission to study the sun in detail during heavy sunspot activity. During its 10-year lifetime, SMM observed more than 12,000 flares. 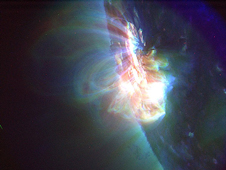 An image of an active region of the sun captured by the Solar Maximum Mission satellite. Credit: NASA 15 Years Ago

February 11-22, 2000: NASA launched the Space Shuttle Endeavour (STS-99) from Kennedy Space Center, Fla. on a Shuttle Radar Topography Mission. The mission was an international project led by the National Imagery and Mapping Agency and NASA, and included the participation of the German Aerospace Center (Deutsches Zentrum fur Luft- und Raumfahrt.). Its objective was to obtain the most complete high-resolution digital topographic database of Earth. A specially modified radar system gathered data that produced high quality 3-D images of 99.98 percent of Earth's surface. After a mission duration of 11 days, the shuttle landed at Kennedy Space Center, Fla. on February 22.

February 7, 2010: NASA will launch space shuttle Endeavour (STS-130) from Kennedy Space Center, Fla. on a mission to the International Space Station. The shuttle crew will deliver the final connecting node, Tranquility Node 3, and the Cupola, a robotic control station with six windows around its sides and another in the center that provides a 360-degree view around the space station.