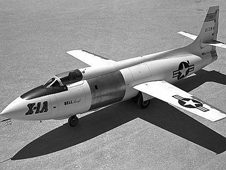 February 25, 1933: The U.S. Navy launched the Ranger (CV-4), the first aircraft carrier designed from the keel up. The ship was sponsored by Herbert Hoover’s wife Lou Henry Hoover and began air operations off Cape Henry in August 1934.

February 21, 1953: The Bell X-1A → made its first powered flight. American test pilot Jean Ziegler flew the rocketplane, which was intended to fly at speeds above Mach 2.

February 11, 1958: The most spectacular display of the rarest Aurora Borealis was observed throughout North America. The Great Red Aurora caused an intense red light in the sky that even made the snow appear red in Alaska. It was so intense that it disrupted radio communication between the U.S. and the rest of the world. 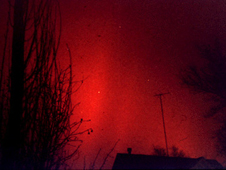 February 9, 1963: The Boeing 727 jet began its maiden flight as it took off from Renton Airport in Washington. The aircraft had three engines -- two rear-mounted external engines and a third central engine.

February 14, 1963: NASA launched Syncom 1 →, the first communication satellite intended for geosynchronous orbit. After about five hours of flight, NASA lost contact with the satellite and could not re-establish it.

February 9, 1978: The U.S. Navy launched FLTSATCOM 1 from Cape Canaveral, Fla. using an Atlas Centaur rocket. It was the first member of the Fleet Satellite Communication System and the first satellite designed for worldwide military communications.

February 7, 1993: Dr. Lonnie Reid, from Lewis Research Center (now Glenn Research Center), was inducted into the Ohio Science, Technology and Industry Hall of Fame. Honored for his pioneering work in fluid dynamics, he was the first NASA researcher to be inducted. Reid joined the ranks of other accomplished Ohioans, including the Wright brothers, Granville Woods and Thomas Edison.

February 1998: The United States, Europe, Japan and Russia put a total of 21 satellites → into orbit during the month of February. Among these satellites was Celestis -02, a burial satellite launched by Orbital Sciences Corporation. As part of a memorial service, the company scatters portions of the departed's remains in space. 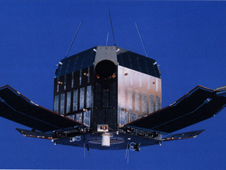 February 1, 2003: After a 16-day mission, Space Shuttle Columbia and the STS-107 crew were lost over Texas. Following an extensive investigation, the Columbia Accident Investigation Board identified the primary reason for the accident: damage to Columbia’s left wing caused by a piece of insulating foam. Since this tragedy, NASA has worked hard to improve the safety of shuttle missions. The agency successfully returned to flight July 26, 2005 with STS-114.