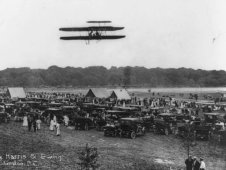 December 4, 1918: The first Army transcontinental flight by four Curtiss JN4's began at San Diego, reaching Jacksonville, Fla., on December 22. The Curtiss Aeroplane and Motor Company's Curtiss JN-4 or "Jenny," a two-seat biplane, was the first mass-produced plane. While it never saw military action, it was used to train 95 percent of all U.S. and Canadian pilots during World War I.

December 29, 1948: The First Report of the Secretary of Defense, James Forrestal, reported that the United States had been researching the concept of an Earth satellite -- a military base in space that would orbit around Earth. The research for the Earth Satellite Vehicle Program was carried out independently by each military service and was assigned to the Committee on Guided Missiles for coordination.

December 19, 1958: The Atlas Project Score satellite transmitted the voice of President Eisenhower with a Christmas message for the world. This was the first transmission and reception of a human voice from space. 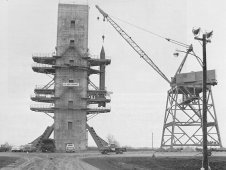 December 21 - 27, 1968: Astronauts Frank Borman, James A. Lovell Jr., and William A. Anders orbited the moon aboard the Apollo 8 spacecraft. Apollo 8 took off from Kennedy Space Center on top of the Saturn V booster. The historic mission lasted seven days and ended with splash down in the Pacific Ocean two days after Christmas. As the ship was on its way to lunar orbit, the crew focused a portable television camera on Earth, transmitting for the first time, an image of Earth from space.

December 1978: NASA's Lewis Research Center (now NASA Glenn) dedicated a solar power system that it installed on the Papago Indian Reservation in Schuchuli, Ariz. It was the world's first solar-powered village. The system provided power for water pumping and residential electricity to 15 homes until 1983, when grid power reached the village. At that time, engineers hooked up the homes to the grid, and the solar system began pumping water from a community well.

December 4, 1998: NASA launched space shuttle Endeavour beginning the STS-88 mission. The shuttle rendezvoused with the Russian-built Zarya Module the next day. The crew attached the U.S.-built Unity connecting module, contained in the shuttle's cargo bay, to the Zarya. Afterwards, in a sequence of complex spacewalks, astronauts connected cables between the two modules, affixed antennae and other elements, and opened the hatches between the two modules. 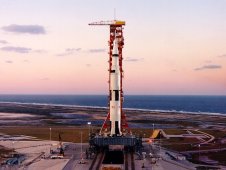 December 17, 2003: An Atlas 3B launch vehicle became the first U. S. military payload to be launched into space by a Russian-made rocket engine, the Russian RD-180. It carried the Ultra-High Frequency Follow-on F11 satellite.

December 19, 2003: The orbiting Mars Express released Beagle 2, a European Space Agency Mars Lander. The Beagle 2 was supposed to soft-land on Mars on December 25, 2003, but no communication was ever established. The Mars lander was declared lost.

December 2008: NASA will launch the Air Force TacSat-3 satellite on the Orbital Science Minotaur Rocket from Wallops Flight Facility at Goddard Space Flight Center. The TacSat-3 will demonstrate the capability to furnish real-time data to a military commander during combat.