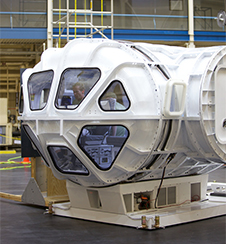 If you want to do productive exploration anywhere in space, you'll need a suitable vehicle. NASA is now testing concepts for a new generation of vehicles, building on lessons learned from the Apollo missions as well as the unmanned rovers on Mars. The Space Exploration Vehicle (SEV) concept is designed to be flexible depending on the destination; the pressurized cabin can be used both for in-space missions and for surface exploration of planetary bodies, including near-Earth asteroids and Mars.

The surface exploration version of the SEV has the cabin mounted on a chassis, with wheels that can pivot 360 degrees and drive about 10 kilometers per hour in any direction. It's about the size of a pickup truck (with 12 wheels) and can house two astronauts for up to 14 days with sleeping and sanitary facilities. Likewise, the in-space version of the SEV would have the same pressurized cabin on a flying platform; it too would allow two astronauts to stay on-site for 14 days.

The surface SEV is designed to require little or no maintenance, be able to travel thousands of miles climbing over rocks and up 40 degree slopes during its ten year life. The vehicle frame was developed in conjunction with an off-road race truck team and was field tested in the desert Southwest with 140 km of driving on rough lava. 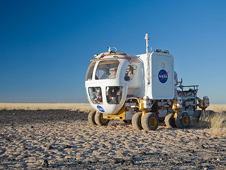 During the 2008 Desert RATS tests at Black Point Lava Flow in Arizona, engineers, geologists and astronauts came together to test the surface version of the Space Exploration Vehicle. Image Credit: Regan Geeseman

› View high-res image
› View low-res image
› View video The view from cockpit and the ability to "kneel" make it easy for astronauts to get close to objects they want to examine without having to leave the cabin. Its wheels can move sideways in a "crabbing" motion, one of many features that make it skilled at scrambling over rough terrain. The crab style steering allows the vehicle to turn on a dime with a zero turning radius and drive in any combination of forward and sideways.

For both the surface and in-space versions of the SEV, astronauts can work in shirtsleeves in the safety of the vehicle's cabin, and when they need to, or want to for exploration missions, they can quickly enter and exit their spacesuits through suitports. These protected suitports keep the astronauts' suits outside, allowing a spacewalk to start in ten minutes. The surface SEV allows the cabin to be removed, so that the chassis can be used to carry payloads or driven by astronauts in spacesuits. The in-space SEV also includes manipulator arms and an airlock, for handling satellites and other objects of interest.

Read the rest of this article


Some of the new technologies to be developed for the surface and in-space concepts include new batteries, new fuel cells, advanced regenerative brakes, active suspension, gaseous hydrogen/oxygen RCS system, automated rendezvous and docking, and new tire technologies. These are the same technologies that are required for electric vehicles such as cars, tractors, and heavy equipment that the U.S. needs to reduce its dependency on fossil fuels. The prototype surface rover is a plug-in electric vehicle with a cutting edge, Lithium-ion battery with a 125 W-hr/Kg specific energy (including cells, packaging and battery management electronics). To meet NASA's requirements, the flight rover will need a 200 W-hr/Kg battery, so a big technology development push is underway. It will need the same reliability, energy storage and recharge capability that will be required for an Earth-based electric sedan that can travel 500 miles before needing to be recharged.

To begin the development of the Space Exploration Vehicle, an initial surface concept was built and began testing in October 2008. This concept vehicle was invited to participate in the 2009 Presidential Inaugural Parade. This vehicle was built using today’s most advanced technologies. As more advanced electric vehicle technologies are developed, they will be incorporated into the design.

The development of these more advanced technologies will not be easy, so NASA has its best engineers and scientists working with the U.S. auto and heavy equipment industries, universities, other government agencies and international partners to make the program succeed. Our success will have a great impact on developing highly reliable and efficient electric cars and trucks for Earth. For each advancement NASA makes in the Space Exploration Vehicle's capabilities, the world will be one step closer to sending humans to explore destinations including near-Earth asteroids and Mars, and one step closer to having highly reliable and efficient electric vehicles on Earth.