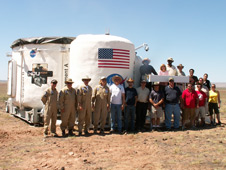 Project team members with the habitat, deployed in the desert during field testing. Image credit: NASA 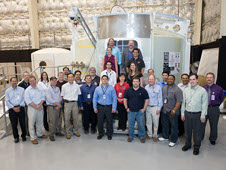 The team includes a diverse group of architects, engineers, scientists, technicians, technologists, and mission planners to encompass all the skills to go from concepts and models to deployed prototype hardware in one year's time. The team has collaborated on a weekly basis over the past year using teleconferences and electronic tools, occasional face-to-face meetings, and a series of progressive reviews to define the different test objectives, sub-systems, goals, and requirements, to work through integration activities, and to plan the test and field operations.

The capabilities being developed in the Habitation Systems project will enable the crew to live and work safely in deep space on missions lasting over one year. Aspects of this project include development of concepts and subsystems for a deep space habitat, testing of highly reliable life support system components for air revitalization and water recycling in ground test beds, developing common life support system components that can be used in multiple exploration vehicles to reduce costs, developing radiation protection and dosimetry sensors, and conducting experiments to understand how fire propagates in microgravity to improve spacecraft fire safety.

Deep space habitats are needed to support human operations at either the Earth-Moon L2 Lagrange point or at a near-Earth asteroid. This project will integrate life support systems, thermal management systems, modular power systems, fire safety systems, radiation protection, and software tools for autonomous mission operations into a representative deep space habitat system. The representative habitat may use excess flight hardware such as a Multi-Purpose Logistics Module (MPLM) or new structures such as an inflatable module. The project will focus on integrated testing of the habitation system with crew in a simulated space environment.