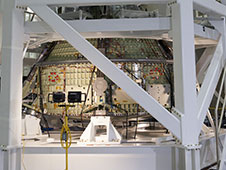 The Orion is seen in its test stand preparing for a Static Loads test at the Operations and Checkout Building at the Kennedy Space Center. Photo credit: NASA/Kim Shiflett
› View larger image

WASHINGTON -- After a month of being poked, prodded and pressurized in ways that mimicked the stresses of spaceflight, NASA's Orion crew module successfully passed its static loads tests on Wednesday.

When Orion launches on Exploration Flight Test-1 (EFT-1), which is targeted for September 2014, it will travel farther from Earth than any spacecraft built for humans in more than 40 years. The spacecraft will fly about 3,600 miles above Earth's surface and return at speeds of approximately 25,000 mph. During the test, Orion will experience an array of stresses, or loads, including launch and reentry, the vacuum of space and several dynamic events that will jettison hardware away from the spacecraft and deploy parachutes.

To ensure Orion will be ready for its flight test next year, engineers at NASA's Kennedy Space Center in Florida built a 20-foot-tall static loads test fixture for the crew module with hydraulic cylinders that slowly push or pull on the vehicle, depending on the type of load being simulated. The fixture produced 110 percent of the load caused by eight different types of stress Orion will experience during EFT-1. More than 1,600 strain gauges recorded how the vehicle responded. The loads ranged from as little as 14,000 pounds to as much as 240,000 pounds.

"The static loads campaign is our best method of testing to verify what works on paper will work in space," said Charlie Lundquist, NASA's Orion crew and service module manager at the agency's Johnson Space Center in Houston. "This is how we validate our design."

In addition to the various loads it sustained, the Orion crew module also was pressurized to simulate the effect of the vacuum in space. This simulation allowed engineers to confirm it would hold its pressurization in a vacuum and verify repairs made to superficial cracks in the vehicle's rear bulkhead caused by previous pressure testing in November.

The November test revealed insufficient margin in an area of the bulkhead that was unable to withstand the stress of pressurization. Armed with data from that test, engineers were able to reinforce the design to ensure structural integrity and validate the fix during this week's test.

To repair the cracks, engineers designed brackets that spread the stress of being pressurized to other areas of the module that are structurally stronger. During these tests Orion was successfully pressurized to 110 percent of what it would experience in space, demonstrating it is capable of performing as necessary during EFT-1.

For information about Orion, visit: