Testing NASA's Next Deep Space Vehicle
"5...4...3...2...1...release." With that countdown, the Apollo-shaped test article that is a base model for the agency's future Orion Multi-Purpose Crew Vehicle, took flight swinging across the sky -- nearing 50 mph (80.5 kph) -- at NASA Langley's Landing and Impact Research Facility, or gantry. 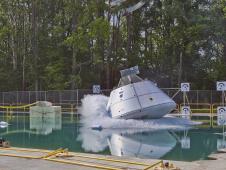 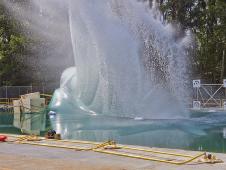 Next, a big boom sounded across NASA Langley Research Center's Landing and Impact Research Facility, also known as the gantry, as the pyros fired releasing the 22,000-pound (9,979 kg) test article from its tethers. Seconds later it splashed into the new Hydro Impact Basin -- an oversized pool that for the next few years will be the testing bed to certify future space vehicles for safe water landings.

Despite the temperature hovering near 100 degrees (37.8 °C) and it being close to the end of the work day, enthusiastic NASA employees and engineers involved in the testing waited along the perimeter of the gantry to witness the second drop of the Orion MPCV test article.

Test engineer Robin Hardy is typically anxious before a test, especially when it comes to the unknown.

"I felt myself straining to hear our test operator say that the data systems were 'triggered,'" Hardy said. "Anything could happen, but seeing the test article hit the mark, come to rest right side up inside the pool for this high energy drop -- the relief was palpable. You can't help but cheer and hoot and clap and know that in the end it was all worth it."

All month gantry technicians and engineers have worked 12-hour days to make sure the drop tests remained on schedule.

Testing began earlier this month at NASA's Langley Research Center in Hampton, Va., in the new basin to certify the Orion MPCV for water landings. The Orion MPCV will carry astronauts into space, provide emergency abort capability, sustain the crew during space travel and ensure safe re-entry and landing.

The last of three water drop swing tests will take place in early August as part of a facility checkout. Testing will resume in September with a slightly modified test article that will make it more representative of the actual flight vehicle. The drop velocities will be different for each test and will represent the entry conditions of the Orion MPCV during a water landing.