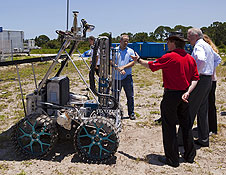 Image above: The engineers leading development of the RESOLVE experiment package look over the prototype during a demonstration of the machine at NASA's Kennedy Space Center in Florida. Photo credit: NASA/Dmitri Gerondidakis
› Larger Image 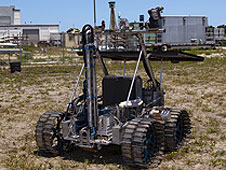 Image above: The RESOLVE's main tool is a drill designed to burrow about a yard into the lunar soil to extract water. Photo credit: NASA/Dmitri Gerondidakis
› Larger Image

A prototype rover might carry big hopes for a potential mission to the moon in the next few years in an effort to prove that water seen from orbit is accessible, and that there is enough of it to reliably make everything from air for astronauts to fuel for rockets. It could be just the long-sought breakthrough that makes the solar system accessible to humans.

"I really believe it will fundamentally change the way we explore space," said Bill Larson, who oversees the program to use substances found on other worlds in missions. "Water enables so many things. If we're going to go out into the solar system, we're going to have to use the resources we find at the destination.”

During the Apollo era, scientists found no evidence for water or other volatile compounds in samples brought back to earth from lunar equatorial landing sites, but later robotic moon missions have provided convincing evidence that the Polar Regions are different. The Lunar Reconnaissance Orbiter, or LRO, and the Lunar Crater Observation and Sensing Satellite, or LCROSS, missions showed researchers that water ice and compounds such as methane and ammonia are abundant in the Polar Regions where deep craters shield some areas from the sunlight that would normally evaporate them.

The payload under development is called RESOLVE, short for Regolith and Environment Science and Oxygen and Lunar Volatiles Extraction. It is seen as the next step in lunar exploration. It is designed to be placed on a rover and driven over the surface of the moon for nine days to map the distribution of the water ice and other useful compounds seen those previous missions.

RESOLVE will also drill into the lunar surface and heat the material collected so that we can measure the amount of water vapor and other compounds that are present, thus showing how future missions could gather and then use these valuable resources.

In its earthly form, the rover and its onboard instrumentation are about as tall as a person and weigh some 660 pounds. In its final configuration for the moon, the rover and its instruments will weigh about a third of that and be somewhat smaller since the moon's gravity is only 1/6th that of Earth's.

Jackie Quinn, RESOLVE’s project manager, points out that the payload's versatile toolset and robust equipment make it suitable for any kind of extraterrestrial resource prospecting, whether digging into an asteroid or Martian soil. With relatively small changes to account for the different operating environments, RESOLVE could be deployed on Mars to perform the same type of resource characterization there as we intend to on the Moon.

RESOLVE is not just a NASA effort; the Canadian Space Agency provided Artemis Jr., which is the rover for the payload, the onboard drill and sample transfer system, as well as avionics microprocessors.

While their ultimate destination is the moon, in the near term, the team of engineers at NASA's Kennedy Space Center in Florida is focusing on a destination much closer to home – Mauna Kea, Hawaii. It turns out the lava-covered mountain's soil is quite similar to that in the ancient volcanic plains on the moon. "It's the perfect lunar analog because it has lunar-like soil and terrain features where we can challenge our hardware and can simulate our mission," Larson said.

The team will take the rover to Hawaii next month and simulate a nine-day mission on the moon. Such testing is critical to show engineers weak points in the design so that they can be corrected prior to the actual mission. The simulation also provides an excellent way to train mission controllers and evaluate our mission plans to insure that we can accomplish all of our goals in a time-constrained mission.

"The more of these environments we test in, the more we learn," said Daniel Lefebvre, a Canadian engineer who also worked on the Dextre robotic system used on the International Space Station. "It's a lot cheaper to do these experiments here while we can and work out the kinks than to launch it to the moon and work out the problems there."

The RESOLVE project is part of the Advanced Exploration Systems Program in NASA's Human Exploration and Operations Mission Directorate.