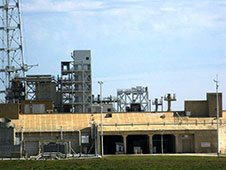 Image above: Construction is nearly complete on the new hydraulic elevators on the surface of Launch Pad 39B at Kennedy Space Center. The Ground Systems Development and Operations Program office, along with Center Operations, continue with construction upgrades and modifications to the pad so that it can support NASA's Space Launch System and other launch vehicles. Photo credit: URS/Jeffry Miller
›View Larger Image


The launch pad of the future is taking shape at NASA’s Kennedy Space Center as the Ground Systems Development and Operations (GSDO) Program office, along with Center Operations, continues with upgrades and modifications to Launch Pad 39B, where the agency’s Space Launch System (SLS) will lift off with the Orion spacecraft atop it, sending humans to new destinations in the solar system.

Center Operations is providing several services to GSDO to manage and implement the upgrades. Systems engineers and construction managers are working on studies, designs and construction requirements for several Pad B projects.

Jose Perez Morales, the GSDO pad element project manager, said that many Pad B projects have been successfully completed.

“Center Operations has been an integral part of the pad team,” he said. “Their dedication to the success of the team continues to be extremely important.”

One of the most visible new features on the pad surface is a steel and concrete structure that houses two elevators and the associated machinery required to operate them. The elevators will provide access from the pad surface to the “0” level, or deck, of the mobile launcher.

According to Lori Jones, a project manager in the Construction of Facilities Division, when the rotating and fixed service structures used for the Space Shuttle Program were deconstructed, two of the old elevators also were removed. A single old hydraulic elevator was left on the pad surface.

“Center Operations performed a study of different design concepts,” Jones said. “Ultimately, it was decided to replace it with two new traction elevators.”

The elevators, which open toward the west, were designed to be similar to those on the mobile launcher in size and capacity.

The contract to build the elevators was awarded in 2011 to Ivey’s Construction Inc. of Merritt Island, Fla. The architectural and engineering firm that designed them is Reynolds, Smith and Hills, also of Merritt Island.

Other projects recently completed include minor modifications to the Pad Terminal Connection Room, replacing the old Halon fire system with a new sprinkler system, and removal of hypergol fuels and the oxidizer farms that were used for the Space Shuttle Program.

Interfaces on the mobile launcher’s utility platform were modified; the water tower was refurbished and repainted; the liquid hydrogen and liquid oxygen spheres were repaired, sandblasted and repainted; and repair work was done on concrete slopes and surfaces around the pad.

Future work includes refurbishing or modifying the piping that will interface with the mobile launcher and replacing the water lines and unused piping beneath the pad, in an area called the catacombs. Concrete repair to the catacomb roof will continue.

The liquid hydrogen, liquid oxygen and other interfaces on the pad or pad structures will be updated. Beneath the pad structure in the Environment Control Room, ducts that supported space shuttles will be removed, and a new system will be designed and built to replace them.

“It’s been really interesting to be part of this project, because it’s my first opportunity to be around at the beginning of a program and to help prepare the ground systems for the GSDO Program,” Jones said. “We can be a gateway to space for NASA’s Space Launch System and other launch vehicles.”