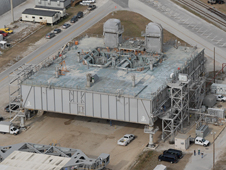 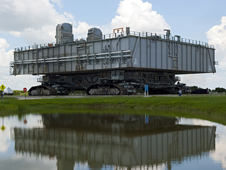 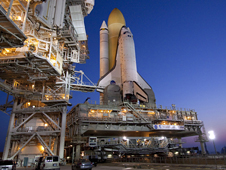 Image above: Morning breaks over Launch Pad 39A following the arrival of shuttle Atlantis and Mobile Launcher Platform-2 prior to the STS-132 mission. Photo credit: NASA/Jack Pfaller
› View Larger Image 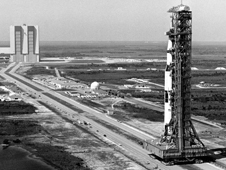 Image above: The mobile launcher platform and Saturn V rocket roll to Launch Pad 39B in March 1969 to prepare for the Apollo 10 mission. Photo credit: NASA
› View Larger Image

NASA's trio of mobile launcher platforms (MLP) are being revamped to serve a variety of next-generation launch vehicles. The huge steel structures, which acted as launch bases for the Apollo/Saturn program and every space shuttle mission, will serve as the platforms that launch the next American-made vehicles to space.

Essentially a large steel box measuring 160 by 135 feet, a platform's surface features wide openings that align with a space-bound vehicle's engines and direct the blast into the flame trench below. Propellant lines and other utilities run throughout the structure. The two-story interior contains a variety of communications devices, control cabinets and other ground support equipment.

Throughout the past year, Kennedy Space Center's Ground Systems Development and Operations (GSDO) program has overseen the removal of much of the hardware used to support shuttle launches, making it available to the new 355-foot-tall mobile launcher in development for the agency's Space Launch System (SLS), a rocket that will launch NASA's Orion spacecraft and provide an entirely new capability for human exploration beyond Earth orbit.

"We're removing a lot of components -- cryogenic, pneumatic, mechanical, electrical, controls-type stuff for reuse on the new SLS mobile launcher as a cost savings," explained John Rigney, GSDO lead architect. "But at the same time, we wanted to keep the MLPs ready for any commercial entities that want to use them."

To accomplish this, the program carefully decided what hardware should be removed from the platforms in order to ensure two would remain available.

Any hardware used in a solid-propulsion system was removed from MLP No. 2. Some of the electrical racks and control panels also were taken out.

"We tried to keep MLP-2 intact for a commercial entity with a liquid-fueled vehicle," said Mobile Launcher Technical Integrator Mike Canicatti. "We tried to pull off what we could that wasn't liquid-related, such as equipment that interacts with solid propellant, mostly pneumatic panels and control cabinets that feed the SRBs."

Conversely, the materials removed from MLP No. 3 leave the platform set to support a vehicle fueled by solid propellant.

MLP No. 1, the oldest of the three, is not intended to be used again, so the team planned carefully which pieces to save and which to leave with the structure.

"We didn't want to turn it over to [Kennedy's Center Operations directorate] with anything in it that had some value," Rigney said. "But at the same time, we didn't want to take everything out, because we'd have to store it and spend money to keep it. So we did the best we could and took out all the parts that were still good."

There are plans to use the hardware that's been pulled out of the platforms. Until then, the majority of the parts are being stored in the Vehicle Assembly Building, in the heart of Launch Complex 39.

The hands-on work to remove parts from the Mobile Launcher Platforms began earlier this year, one of many such activities under way to transition and retire the shuttle fleet. The job is expected to be complete by year's end.

The first test flight of NASA's Space Launch System, which will feature a configuration for a 70-metric-ton (77-ton) lift capacity, is scheduled for 2017.