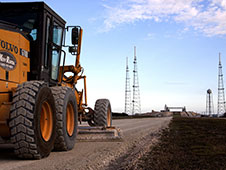 Image above: A worker from Canaveral Construction in Mims, Fla., re-grades a section of the crawlerway near Launch Pad 39B. Photo credit: NASA/Jim Grossman
›View Larger Image 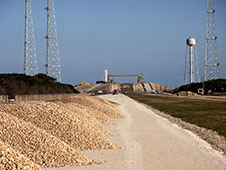 Image above: Workers have removed the Alabama river rock from one side of the crawlerway near Launch Pad 39B. Photo credit: NASA/Jim Grossman
›View Larger Image


Several sections of the crawlerway that lead from the Vehicle Assembly Building (VAB) to Launch Complex 39 at NASA's Kennedy Space Center in Florida are getting a facelift to prepare to transport the agency's Space Launch System (SLS) rocket to its launch pad.

Led by the Ground Systems Development and Operations (GSDO) Program office at Kennedy, work is under way to upgrade the two 40-foot-wide pathways the crawler-transporter will travel as it carries the SLS from the VAB to the rocket's launch site at Launch Complex 39's Pad B. Portions of the pathway that lead from the turnoff from Pad B to Pad A also will be updated.

According to Sam Talluto, a GSDO senior project manager, it is the first time that the crawlerway’s foundation will be repaired since it was constructed in the early 1960s. The top layer river rock was removed and replaced as it wore down, but the lime rock foundations below it saw very little, if any, rework since the original installation.

The crawlerway can handle weights of up to 26 million pounds, but over the years has become compacted from the weight of crawler-transporters carrying the Apollo/Saturn V rockets and space shuttles to the pads for launch.

Water drain-off issues developed from time to time during heavy rainstorms, including just before the rollout of the shuttle stack for the STS-130 mission in 2010, when heavy rains saturated areas of the crawlerway and the crawler-transporter’s tracks became coated in mud as it traveled to the pad.

“It’s important to get the work completed now, while the center is upgrading its infrastructure,” Talluto said. “The upgrades will improve the crawlerway’s foundation, drainage and allow the crawler-transporter a smoother ride to the launch pads.”

Work is targeted for completion by June 2014.

Canaveral Construction of Mims, Fla., is handling the labor-intensive project. Beginning near Pad B, crews are removing all of the existing Alabama river rock and the top layer of the lime rock foundation.

From the VAB to Pad A, crews will remove and sift the river rock to eliminate crushed or small pieces and add new rock if needed. From the Pad B turnoff to Pad A, only rutted areas of the lime rock will be repaired.

From the VAB to the Pad B turn, the main asphalt road will be widened by two feet and repaved. Most of the retaining timber that runs along the south side of the crawlerway near the road will be replaced.

At the crawler transporter yard, fresh river rock already has been laid down.

When the work is complete, the crawlerway, which has supported NASA’s space program for 50 years, will be ready to handle the weight of a new breed of rockets and spacecraft, including the towering SLS atop the crawler-transporter beside its mobile tower.