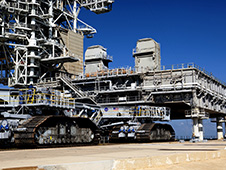 Image above: Crawler-transporter No. 2 arrives at Launch Pad 39A to pick up a shuttle-era mobile launcher platform and moved up and down the ramp to the pad testing how well the systems worked while carrying a load. NASA/ Dimitri Gerondidakis
›View Larger Image 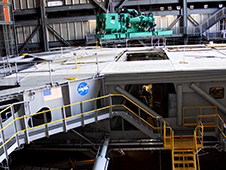 Image above: Inside the Vehicle Assembly Building a crane lifts a new engine and generator for installation in crawler-transporter 2. The upgrade work will allow the crawler to carry NASA’s Space Launch System heavy-lift rocket to the launch pad. Photo credit: NASA/Jim Grossmann
›View Larger Image 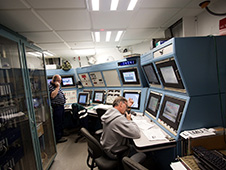 Image above: Engineer Bill Couch, standing on the left, and technician Gary Milbourne, both of United Space Alliance, monitor the updated controls of crawler-transporter No. 2 as it moves out of high bay 2 of the Vehicle Assembly Building. The test drive is designed to check out recent modifications and upgrades. Photo credit: NASA/Jim Grossmann
›View Larger Image


For more than 45 years, two crawler-transporters, or CTs, have carried America's human spaceflight program on their backs. This past year at NASA's Kennedy Space Center in Florida crawler-transporter 2 has been undergoing a major overhaul to keep the workhorse going for many years to come. With the first phase of modification work complete, the crawler-transporter recently went for a successful test drive that proved all upgrades are working as designed.

The behemoth crawler-transporters are designed to lift the mobile launchers with launch vehicles mounted atop, then move the entire integrated stack from the Vehicle Assembly Building (VAB), where launch vehicles have been assembled since the Apollo era, to the ocean-side launch pads.

"It's like having a 'car' that is almost 50 years old," said Mary Hanna, CT project manager in the Vehicle Integration and Launch Branch of NASA Ground Systems Development and Operations. "We're going to need this special vehicle for many years to come, so it was time for a tuneup."

Weighing six and a half million pounds and larger in size than a professional baseball infield, the crawler-transporters creep along at a maximum speed of one mile per hour when carrying a mobile launcher with a launch vehicle atop. Unloaded, the crawlers can manage about two miles per hour.

"We're going to need this special vehicle for many years to come, so it was time for a tuneup."
Mary Hanna,
NASA Crawler-Transporter
Project Manager

While big and slow, the crawler-transporters play a crucial role.

Like much of the infrastructure at Kennedy, the crawler-transporters were constructed in the mid-1960s to move the Apollo Saturn V rockets that took American astronauts to the moon, Skylab and Apollo-Soyuz Test Project. Through three decades of space shuttle flights, the crawlers served in the same role until the final space shuttle mission in 2011.

"After a month of work at the crawler yard park site, we moved inside the VAB," Hanna said. "This gave us access to the heavy cranes and it provided weather protection over the past 10 months."

The modifications and upgrades include 45 different tasks with 32 of these being tested the week of Nov. 5.

According to Terry Berman, project lead for USA, bringing the crawler-transporter up to state-of-the-art technology will be crucial for future launch operations at Kennedy.

"Our plan was to replace aging power equipment and bring the controls up to 21st century standards," Berman said. "The major efforts focused on replacing the original sets of AC (alternating current) electrical generators, upgrading the brakes and preparing crawler-transporter 2 for lifting the additional weight of the SLS rockets.”

With the first phase of modifications complete, crawler-transporter 2 began a test drive that took place over several days. At Launch Pad 39A, the crawler picked up a shuttle-era mobile launcher platform and moved up and down the ramp to the pad to test how well the systems worked while carrying a load.

"It began early on Nov. 5," Hanna said. "The crawler was driven out to the launch pad for a thorough validation of all the recent modifications. We've been very pleased at how well everything has worked."

With the checkouts at Launch Pad 39A concluded, crawler-transporter 2 returned to its park site near the VAB. Modification work is scheduled to continue after the first of the year.

"We expect to have the crawler back in the VAB by January 2013 to continue the remaining work," Hanna said.

"The next round of work," Berman said, "will include replacing the jacking and leveling cylinders and the roller bearing assemblies to accommodate the additional weight of the Space Launch System rocket."

Existing roller bearings will be replaced with a redesigned assembly that can carry the greater load. The redesign will also include an improved lubrication system and temperature monitoring to provide a longer operational life.

"Everything we've tested has gone very well," Hanna said. "The team has done an outstanding job. By the end of 2015 we should be ready to do final testing to show we're ready for the SLS."