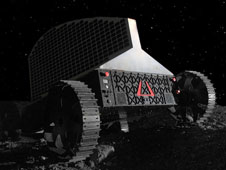 Image above: Astrobotic Technology is developing a rover that operates on solar energy provided with side-facing panels. The solar panels are set vertically because the rover will operate at the lunar poles where the sun appears closer to the horizon. Artist concept courtesy of Astrobotic Technology
› Larger Image

The American space program stands at the cusp of a "water rush" to the moon by several companies developing robotic prospectors for launch in the near future, according to a NASA scientist considering how to acquire and use water ice believed to be at the poles of the moon.

"This is like the gold rush that led to the settlement of California," said Phil Metzger, a physicist who leads the Granular Mechanics and Regolith Operations Lab, part of Kennedy's Surface Systems Office. "This is the water rush."

Collecting the water, or at least showing it can be collected, is where the Pittsburgh-based Astrobotic Technology comes in. The small company signed on in April for the third phase of a Small Business Innovative Research deal that continues research work to develop technologies NASA may need to harvest space resources in the future.

The company already is far along in its development of a rover that will work on its own. There is a deal in place with SpaceX to launch a lander and rover on a Falcon 9 rocket in October 2015. Astrobotic is competing against several other companies for the Google Lunar X-Prize, an award worth up to $30 million funded by the Internet search engine company.

"Our intent is to land on the surface of the moon in October 2015 and find water," said John Thornton, president of Astrobotic.

Water already on asteroids, the moon or Martian moons represent a potential bonanza to NASA's exploration plans because the resource can be put to use in so many critical ways for astronauts venturing into deep space. Water, made of hydrogen and oxygen molecules, can be turned into everything from breathing air to rocket fuel, not to mention the chance to filter it clean and drink it.

"Using these resources is the key to making space travel and habitation affordable and sustainable – we are starting to learn how to live on another planetary surface," said Rob Mueller, a senior technologist in Kennedy’s Surface Systems Office.

Not having to launch those resources from Earth would dramatically cut the price tag for exploration, plus lower the risks involved for the crews as they venture into deep space on missions to an asteroid or Mars.

"There have been studies that have shown you can reduce the mass of a mission to Mars by a factor of somewhere between three and five if you get propellants from the space environment rather than launching them all from Earth," Metzger said.

Thornton said the fact that a number of companies are developing plans and building machines to go to the moon shows that the potential is real.

"If we were doing something really big and no one else was trying to do it, then it might not be that big," Thornton said.

Apollo astronauts found no signs of water ice as they walked on the surface of the moon near the equator from 1969 to 1972, nor did the soil and rock samples they brought back to Earth. However, several probes within the last 15 years found one indication after another that frozen water not only exists on the moon, but is abundant.

"None of these have been ground-proofed yet," Metzger said. "We really need to get vehicles on the surface of the moon prospecting to characterize those deposits, like how do they vary spatially, how do they vary with depth?"

A big question now is whether water ice on the moon is a powder akin to what skiers experience on a mountainside or is it completely solid like an ice cube, or did water seep down between granules of soil and freeze to produce rocks as hard as granite. It wouldn't surprise lunar researchers to find cases of all three as robotic prospectors explore the surface.

"Our best guess is it's going to be the ice," Thornton said. "Probably small little pieces of ice mixed in with the regolith."

Of course, there's more to exploration than knowing what questions to ask. There's also the issue of inventing technology that allows a robotic landing cheaply enough that a private company can pay for it, developing a rover heavy enough to drill or dig into the moon's surface without lifting itself off the ground in the low gravity, not to mention the matter of keeping the rover warm and powered in areas of the moon that are shadowed and surviving the lunar night.

Metzger has been pleased with what he has seen from the company so far.

Thornton said exchanging a modular digging element on the rover for a drill and instruments was not particularly difficult, and is an option for prospecting on the moon.

"The excavation chassis is a perfect fit for a mission to the moon in terms of scale, mass and power. We took out the excavation part and dropped in a drill and instruments," Thornton said.

Astrobotic will test its rover and tools in the bin of simulated lunar soil that Kennedy uses for its annual Lunabotics Mining competition to prove the vehicle is up to the challenges of operating on the moon.

"You have to be able to go to the moon with some confidence that your vehicle's going to be able to get around and to dig in the soil," Thornton said.

While NASA is excited about the chances to use a new resource for deep space exploration, Astrobotic wants to use the robotic prospector to start mapping where the biggest water deposits are, along with other helpful chemicals, and then use the information to develop ways to extract the materials from the moon and put it to use. There are no plans to return water or other lunar samples to the Earth, Thornton said.

"The beauty of sending a robot is they don't demand a return ticket," Thornton said. "Once we know where the water is and what form it is in, we can develop systems to produce it in useable quantities. Water is a critical resource because you can drink it, breathe it and use it for rocket fuel."

There are a great many questions to answer before astronauts can count on the moon, an asteroid or Martian moons as fuel and air depots, but Metzger and Thornton said the answers are within reach.

"That's the reason to go, because we don't know the answer," Thornton said.