Grow Text SizeShrink Text Size
Lighting up the Lunar Night with Fuel Cells
How do you survive in a remote, mountainous region that has no water or wind and sometimes goes without sunlight for weeks?

This is not the premise for a survivalist reality show; it's a question NASA must answer before sending humans to live and work on the moon. 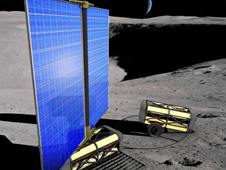 Illustration of a solar array and regenerative fuel cell on the moon. Credit: NASA

Within the next twenty years, people again will explore the vast lunar terrain. This time, we're going to build a permanent outpost where we will conduct scientific research, learn to live off the land, and test new technologies for future missions to Mars and beyond.

During the day, solar arrays will generate electricity for habitats, life support systems, rovers, communications systems and other equipment. But lunar nights last up to 334 hours in some places. Even at the moon's south pole, the sun never rises high. Mountains and hills block sunlight from reaching the surface, and night bathes the moon in total darkness for more than 100 hours.

NASA's Glenn Research Center in Cleveland is leading an effort to develop systems that could store energy for use during the long, frigid lunar nights. The solution may be a fuel cell system that originally was designed for a high-altitude solar-electric airplane.

In 2005, Electrical Engineer David Bents and his team at Glenn demonstrated the first and only fully closed-loop, regenerative fuel cell ever operated. Though the technology never was implemented on the airplane, Glenn engineers are gleaning valuable information from the project as they design a next-generation regenerative fuel cell for the moon. 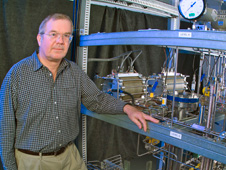 "What makes our regenerative fuel cell unique is that it's closed loop and completely sealed," Bents said. "Nothing goes in and nothing comes out, other than electrical power and waste heat. The hydrogen, oxygen and product water inside are simply recycled over and over again."

In other words, instead of using oxygen from the air like other regenerative fuel cells, the closed-loop system re-uses the oxygen extracted from the water. That makes it ideal for use on the moon, where there is no oxygen.

The system is very similar to a rechargeable battery, but it can store four to six times more energy than a battery of the same weight.

In the summer of 2005, Glenn demonstrated the first fully closed-loop regenerative fuel cell ever operated. It completed five continuous day and night cycles. That's nowhere near forever, but at the end of the demonstration, it had not leaked and was capable of running at least one more cycle. 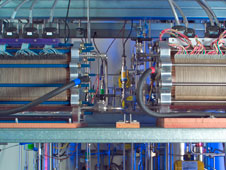 Those five days of operation were the result of several years of hard work. The team's diligence paid off by proving a regenerative fuel cell's potential as an energy storage device for aerospace solar power systems.

Since the demonstration in 2005, the team has modified and upgraded much of the software, circuitry and hardware to make the system run more reliably.

The lessons they learned and information they gathered in the process will be invaluable to Glenn's Energy Storage Project Office when it develops a prototype system to work in the harsh lunar environment.

"Even though it was originally designed for an airplane, the system has given us a leg up," said Ann Over, chief of Glenn's Advanced Capabilities Project Office. "The knowledge we gained will feed directly into our lunar regenerative fuel cell technology program."

Glenn plans to begin work in 2008 on a prototype regenerative fuel cell system for the lunar outpost.