If Earth had a mountain so incredibly high that its peak poked through the outermost layer of our atmosphere, mountain climbers smart enough and hardy enough to reach the top would have some idea what it will be like to be camped on the moon.

For those mountain climbers, it would be quiet and there would be no wind or weather to overcome. But without long and careful preparation, those mountain climbers would have no air to breathe, no food or water and no protection from the sun's radiation. All around them would be rocks and, if they were lucky, perhaps a bit of frozen ice in the crevices that never saw the sun.

Now imagine that instead of reaching the peak and glorying in the accomplishment and beauty of the view for a day or two then returning to the meadows at the base of the mountain, the mission was to climb those unforgiving miles to the top and create a base camp suitable for living months at a time. 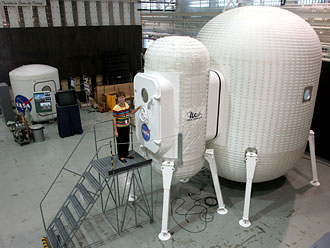 That is the enormous challenge that NASA and its future exploration partners face now that the agency has announced its intention to build an outpost on the surface of the moon -- a base camp that would become busy when visitors are there, but that could be abandoned for long periods without long-term harm.

With such an outpost, NASA could learn to use the moon's natural resources to live off the land, make preparations for a journey to Mars, conduct a wide range of scientific investigations and encourage international participation.

The first mission could begin by 2020.

As currently envisioned, an incremental buildup would begin with four-person crews making several seven-day visits to the moon until their power supplies, rovers and living quarters are operational.

At that point, missions would be extended to two weeks, then two months and ultimately to 180 days. Over the first decade of lunar habitation, space travelers would learn the techniques and skills needed for the eventual journey to Mars. 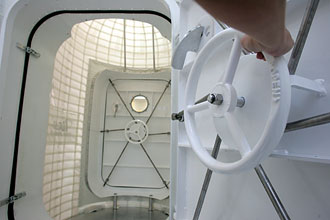 Image to left: The test structure will help researchers determine the best designs and materials for inflatable lunar habitats, to include connecting tunnels between crew quarters on the lunar surface. Credit: NASA/Jeff Caplan
+ View Larger Image

The first steps in making a lunar outpost a reality are being taken now, as planners intensify their efforts to determine what it will take for humans to safely live and work on the lunar surface.

One team of experts from NASA's Langley Research Center, NASA's Johnson Space Center and NASA contractor ILC Dover LP is looking at inflation-deployed expandable structures as one possible building block for a lunar base.

As a starting point, ILC Dover has delivered a 12-foot (3.65 meter) diameter inflatable structure made of multilayer fabric to Langley for ground-based evaluation of emerging technologies such as flexible structural health monitoring systems, self-healing materials and radiation protective materials. Attached to the structure is a smaller inflatable structure that serves as a demonstration airlock. Both are essentially pressurized cylinders, connected by an airtight door. 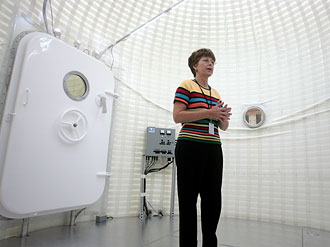 In the next phase, the team will perform an architecture study comparing inflatable and rigid structures for crew habitats.

In a related development, the government-industry team -- spurred by a NASA Johnson proposal led by Larry Toups, space architect at Johnson -- will work with the National Science Foundation to build an inflatable structure for demonstration in the Antarctic. While not the lunar surface (or the top of an imaginary mountain), the harsh environment of the Antarctic will provide valuable lessons.

Once inflated, the unit will likely serve as a dry storage facility and be monitored for its behavior. The work is expected to start shortly. ILC Dover is contributing to the manufacturing of the unit, while Langley and Johnson will contribute a modest amount of manpower. The goal is to transport the unit to the Antarctic in 2008 -- in time to learn more about inflatable structures before decisions must be made between competing technologies for NASA's first habitable lunar base.

Whether lunar habitats are ultimately inflatable or constructed in some other way, designing for extreme living and working conditions will likely result in yet-unseen applications for everyday life right here on Earth.